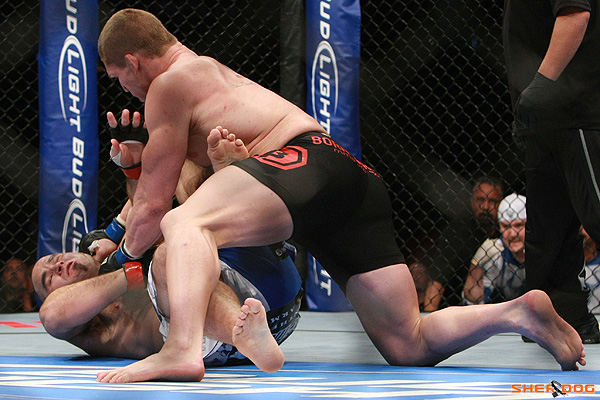 A small heavyweight scene is currently developing outside of the big leagues. Fighters like Eddie Sanchez, Tony Lopez, Brett Rogers, Peter Graham, Mike Hayes and Damian Grabowski may not be under contract with Zuffa LLC, but they find avenues to deliver quality scraps on the independent circuits.

In this monthly series, we shuttle fans around the globe in an effort to broaden their MMA horizons, showcasing the best fights that might not get much attention otherwise. This month, we feature three heavyweight bouts from three different continents. Who knows? Perhaps one of these guys will get their chance in the Ultimate Fighting Championship somewhere down the line.


Advertisement
As always, the list does not focus on the well-promoted main event bouts from major organizations you already know to watch but rather on fights from all over the planet that are worth seeing. The UFC, Strikeforce and Bellator Fighting Championships shows are excluded by design.

Where in the world is Duffee? Silence had fallen on the promising career of the two-time UFC veteran last year. Licking his wounds from the embarrassing defeat at the hands of Dutch behemoth Alistair Overeem, the 26-year-old knockout artist has gone back to the drawing board to work on his game. Next for him is a picture-perfect matchup in giant South African striker Grove. The 41-year-old Bellator veteran may have lost a fight here and there, but he has never been knocked out in 17 professional outings. Meanwhile, Duffee has recorded all of his wins via knockout. One streak has to end.

Two of the most promising Eastern European prospects will collide at World Free Fight Challenge’s first major event of the year. Undefeated Ukrainian Churilov, a teammate of highly regarded submission specialist Pavel Kusch at Kiev’s Combat Dobro team, is making his debut outside of the former Soviet Union. His opponent will be once-beaten Serbian Milosevic, who trains alongside WFC mainstays Aleksandar Radosavljevic and Dragan Tesanovic. The winner can hold out hope for a spot in the Bellator Season 7 welterweight tournament.

Originally, former Carlos Condit teammate Tyler East, a man on an impressive seven-fight win streak with five first-round stoppages, was supposed to take on Lopez. The only blemishes on East’s resume since December 2009 are a pair of losses to the fellow King of the Cage heavyweight champion. With three weeks’ notice, Tyler had to withdraw from the fight, and his older brother, Cody, an undefeated heavyweight, will take his place. He will have his work cut out for him, as “Kryptonite” is currently enjoying the best phase of his career, racking up a pair of big wins over Russians Dmitry Zabolotny and Shamil Abdurahimov.

Arguably Australia’s top bantamweight, 28-year-old Vaculik is taking a big step up in competition as he takes on Sengoku and Bellator veteran Jaggers. Both men fought only once last year, but Vaculik has been more active of late, recording a first-round submission over Australia-based Nebraskan “Quick” Nick Honstein in February. Jaggers may have a distinctive edge in experience and striking skills, but Vaculik has never been stopped and will be looking to choke out his American opponent -- a submission to which he appears to be susceptible. “Japan against Minnesota” is quite a curious theme for a fighting event in the Midwest, but the Cage Fighting Xtreme promotion has done a decent job of pulling it off and delivering a couple of solid matchups. Jeremy Hamilton and UFC vet Yoshiyuki Yoshida will headline, but the real show-stealer appears to be the fight between local hero Perzynski and third-ranked welterweight Shooter Koyama. Perzynski is well-rounded and quite experienced despite his young age, but Koyama is a serene and robust fighter who knows how to win a judges’ decision.

Heading into last year’s Abu Dhabi Combat Club Submission Wrestling World Championships finals, few experts gave old wolf Lister a chance against the new breed of Brazilian light heavyweights like Rodolfo Vieira, Joao Assis or Antonio Braga Neto. They appeared too big, too strong and too technical. Yet Lister, the competition’s 2003 absolute division gold medalist, submitted everybody en route to his second title. Now, the 36-year-old wants to give MMA fighting another go. He is slated to face Irish MMA legend Moore in the main event of Cage Contender 13.

In this month’s featured women’s matchup, Top 5-ranked female flyweight Ellis-Ward takes on once-defeated Bellator veteran Penne. Both ladies are in their sporting primes, and while Ellis-Ward has to be considered the slight favorite going into the fight, she has suffered back-to-back defeats; Penne is coming off of a win. Ring rust may come into play as Penne, a Reign MMA fighter, was last in action 16 months ago. She will have to work her wrestling with coach Mark Munoz to avoid the dangerous submission game of Ellis-Ward.

United Kingdom promotion Cage Warriors Fighting Championship has gone from being one of the problem children of European MMA to everybody’s favorite midweek leisure activity in just a couple of months. Its fifth event of the year -- and third in the Middle East -- will see the semifinals of its middleweight tournament. In the marquee matchup, ultra-heavy-hitting Welshman Phillips will take on Ukrainian submission specialist Kusch. The 23-year-old Kiev native, who took the fight on 10 days’ notice, has secured all 12 of his career wins by way of tapout. Can his chin withstand the power of the “White Mike Tyson?”

By adding the 125- and 135-pound weight divisions, the UFC has made a giant leap towards uniting all of the world’s best fighters inside its Octagon. Still, a lot of the top talent at the lighter weights can still be found in Asia. Two of the premier bantamweights in Japan will be fighting for a shot at Shintaro Ishiwatari’s Pancrase crown. Rising star Tezuka already came up short against the titleholder last summer and is fired up for revenge. First, he has to make it past Shimizu, one of the finalists of the Sengoku Asia bantamweight grand prix that never came to a conclusion.

Fledgling promotion MMA Attack is gaining more and more popularity with Polish fans and is challenging longtime top dog KSW for supremacy after only one event. For its second show at the 11,500-seat Spodek Arena, it has lined up many domestic stars like Peter Sobotta, Piotr Strus and Michal Fijalka. In addition to the main event, which features Lithuanian bodybuilder Robert Burneika, the promotion is also bringing back the country’s No. 1 heavyweight in Grabowski. The once-beaten “Polish Pitbull” will take on six-time UFC veteran Sanchez.