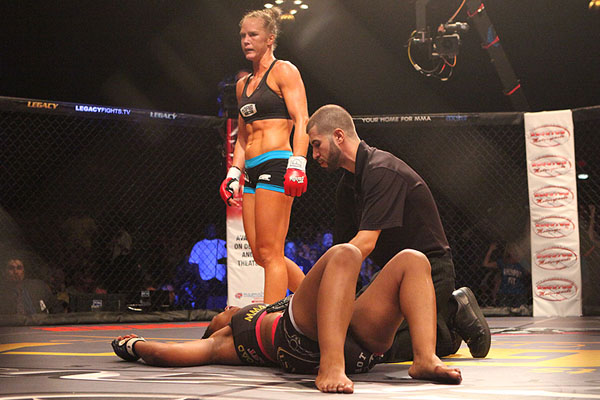 Holly Holm may not be long for the regional mixed martial arts circuit.

Reportedly in negotiations with the UFC, Holm will meet Julianna Werner for the vacant Legacy Fighting Championship women’s bantamweight crown in the LFC 30 headliner on April 4 at the Route 66 Casino in Albuquerque, N.M. This will be the third bout in a four-fight deal with the Texas-based promotion. Holm was signed to a non-exclusive contract that would allow her to sign with the UFC before completing it.

“The Preacher’s Daughter” owns a gaudy 33-2-3 record as a professional boxer, having won titles in multiple weight classes in multiple organizations. The Jackson’s Mixed Martial Arts representative has made a smooth transition to the cage, as she has finished five of her six opponents by knockout or technical knockout. Holm, 32, retired from boxing in 2013 to focus on MMA full-time. She last appeared at a Fresquez Productions event in December, when she notched a unanimous decision over Angela Hayes.

Werner will enter her Legacy debut on the strength of a five-fight winning streak. The 32-year-old Brazilian last competed under the Arena Force banner in August, when she took a unanimous verdict from Deise Lee Rocha. All three of Werner’s losses have come at the hands of Invicta Fighting Championships standout Vanessa Porto.

The Holm-Werner title fight is but one under-the-radar matchup worth monitoring during the month of April. Here are nine more:

Gafurov, who signed with One Fighting Championship in January, will put his M-1 Global featherweight title on the line against the surging Morrison. The 29-year-old Russian has won all eight of his fights, scoring six finishes, and owns a June 2012 victory over current UFC lightweight Mairbek Taisumov. Gafurov last appeared at M-1 Challenge 41 in August, when he put away Yuri Ivlev with second-round punches at The Flying Dutchman in St. Petersburg, Russia. Morrison will carry a streak of eight consecutive wins into the match.

Frenchmen Duquesnoy and Violet will duke it out for the vacant British Association of Mixed Martial Arts featherweight championship. The once-beaten Duquesnoy, 20, has won four in a row, including a 34-second technical knockout against the previously undefeated Scott Hunt. He made his BAMMA debut in December, when he stopped James Saville on second-round punches and elbows at the LG Arena in Birmingham, England. Spawned by the same Haute Tension camp that produced Bellator MMA Season 6 welterweight tournament winner Karl Amoussou, Violet has won all eight of his fights, finishing five of them.

Back-to-back losses to American Top Team’s Kenny Garner cost Gugenishvili the M-1 Global heavyweight title and some of the considerable hype that once surrounded him. However, the 27-year-old Georgian remains an intriguing commodity. Gugenishvili has secured 10 of his 11 career wins by submission, nine of them inside one round. A former two-division King of the Cage champion, Bonello last competed inside the One Fighting Championship organization in August, when he submitted to a third-round rear-naked choke from Rolles Gracie in the Philippines.

A blue-chip prospect in every sense of the word, Pacheco has finished all nine of her foes, four of them in 90 seconds or less. The 19-year-old Brazilian kept her perfect professional record intact in December, when she wiped out Mexican striker Irene Aldana with third-round punches at Jungle Fight 63, capturing the inaugural Jungle Fight women’s bantamweight championship in the process. The unbeaten Silveira returned from a five-year sabbatical in December, submitting Raiane Nunes with a rear-naked choke under the Paracuru Extreme Fight banner in Brazil.

Johns claimed the Cage Warriors Fighting Championship bantamweight strap in September, when he went eight rounds and 40 minutes in winning a four-main tournament at CWFC 59. The undefeated 22-year-old Wales native will now defend his title against Brum, a 26-year-old Englishman who has spent time training at Team Alpha Male. Brum has rattled off eight straight wins and has not lost a fight since he was choked unconscious by Jackson’s Mixed Martial Arts standout Erik Perez at BAMMA 7 in September 2011. 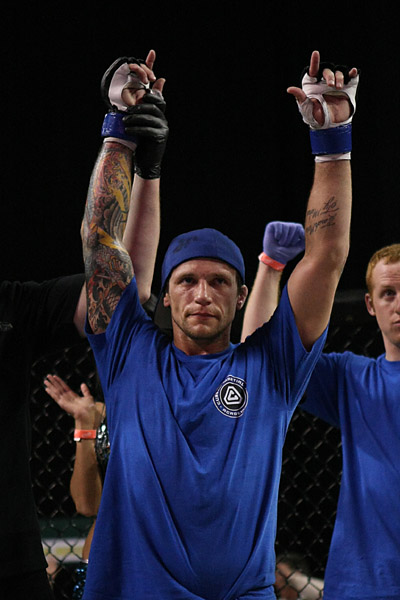 Photo: Keith Mills/Sherdog.com
Curran owns 19 submissions.
Santella will defend his Cage Fury Fighting Championships flyweight crown against Honstein, as he tries to extend his career-best five-fight winning streak. The 29-year-old retained his title with a first-round triangle choke submission against Dave Morgan at CFFC 24 May. Santella trains out of the AMA Fight Club, where he sharpens his skills alongside Ultimate Fighting Championship veterans Jim Miller, Dan Miller and Charlie Brenneman. Honstein will enter the cage on the heels of consecutive first-round stoppages against Isaac Colon and Josh Mercado.

Curran’s retirement was short-lived. The 36-year-old Brazilian jiu-jitsu black belt walked away from MMA following an August defeat to Pedro Munhoz but has elected to return to the sport that helped define him. Curran, who made his professional debut in January 1998, has delivered more than half (19) of his 34 career victories by submission and holds notable wins over Raphael Assuncao, Wagnney Fabiano and Antonio Carvalho. Santos, 33, was released by the UFC following three straight losses to Iuri Alcantara, Ian McCall and Chris Cariaso.

The once-beaten Griffin will put his 170-pound belt on the line against Mitchell, a 34-year-old David Terrell protégé. Griffin has pieced together a four-fight winning streak since suffering his lone career setback in a split decision loss to Justin Baesman in June 2012. He maintained his current push in January, when he outpointed journeyman Waachiim Spiritwolf at The Warriors Cage 19. A former Tachi Palace Fights champion, Mitchell went 1-4 inside the Octagon before being released by the UFC.

Kitaoka will return to Deep for the first time since winning the organization’s lightweight championship in a unanimous decision over Daisuke Nakamura nearly a year ago. The 34-year-old former Sengoku titleholder saw a modest two-fight winning streak grind to a screeching halt in December, when he was knocked out 19 seconds into the second round of his New Year’s Eve showdown with Ramazan Esenbaev. Kitaoka has secured 10 of his 32 professional victories via leg lock. Miyazaki will enter the bout on a string of seven straight wins. His only two defeats have come by disqualification.