The ultimate catastrophe that was the Affliction “Trilogy” cancellation robbed fight fans around the globe of several anticipated matchups -- Jorge Santiago vs. Vitor Belfort, Jay Hieron vs. Paul Daley and, of course, Fedor Emelianenko vs. Josh Barnett.

Still, the month of August passes as arguably the strongest of the year in terms of quality and quantity of top bouts. United States promoters look particularly excellent this month, as all five top spots on this list are occupied by fights that take place inside the country.

As always, this list does not focus only on the major bouts you already know to watch, but rather on fights from all over the planet that are worth seeing.

Fledgling Floridian promotion “Art of Fighting,” which hails from the Macho Man’s old stomping grounds in Sarasota, will move to neighboring Tampa for the first time. Headlining the fourth event in the young history of the organization will be Florida’s own Tom Sauer and Brazilian jiu-jitsu legend Marcio Cruz. Sauer, who had a couple of big wins in the now defunct Rings promotion in 2000, has only returned from a 20-month layoff this April and will face the six-time BJJ world champion “Pe de Pano” in a classic confrontation between wrestling and jiu-jitsu.

London fight fans have seen “One Punch” Pickett rise and mature as a fighter during the past five years. Following his debut in the opening fight at Cage Rage 9, the heavy-hitting featherweight’s career came full circle in March when he headlined his first event for the promotion that had been rebranded as Ultimate Challenge UK. In the first title defense of his UCUK featherweight belt, Pickett takes on Lee, a former welterweight and two-time UFC veteran.

Eliminated from the Dream featherweight grand prix quarter-finals by Brazilian jiu-jitsu black belt Bibiano Fernandes, reality has set in with Imanari. Consider how the leglock master will have to defend his Deep bantamweight title for the first time. Standing across the ring will be spring’s Protect Cup winner Hori. The 27-year-old knockout artist also raised eyebrows when he went the distance with highly touted Swedish prospect Sami Aziz in May.

The battle between Gonzalez, a submission specialist from Sweden, and Asrih, perhaps Germany’s most dangerous striker, has emerged as part of the Team Germany vs. Team World mini-series. Both men have flown under the radar for the majority of their careers, as neither has managed to win a big fight yet. Gonzalez failed to beat Dan Hardy twice; Asrih was knocked out by Tomasz Drwal and submitted by Lucio Linhares. The winner of this fight may finally get the big break for which he has worked his entire career.

Knighted as Europe’s brightest prospect under the age of 23 five weeks ago, Frenchman Amoussou will make his second appearance in the US on the main card at M-1 “Breakthrough.” Speculation about a major M-1 card in the states was rampant last year, but it never came to fruition after the group eventually split from its American partner, Sibling Sports. The promotion’s recent history seems of little interest to Amoussou and Thompson, who want to make their mark in what promises to be an exciting back-and-forth battle. 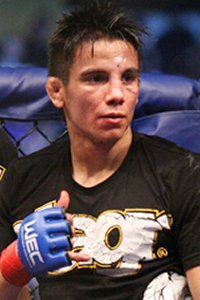 A championship fight between one of the top five pound-for-pound fighters in the world and an undefeated challenger would probably come out in the top spot every other month, but not this time. Consider it proof of the stacked nature of this August. Torres has seamlessly transferred his killer performances from the minor leagues of Indiana to World Extreme Cagefighting -- the playground for the lighter weight classes in North America. Do not sleep on Bowles, however, as he dispatched highly rated Brazilians Marcos Galvao and Will Ribeiro in two of his last three fights.

Even in the UFC, it stands as an exception when two top 10 fighters in one weight class square off against each other outside a main event. Such will be the case at UFC 102, as former King of Pancrase Marquardt faces Brazilian jiu-jitsu world champion Maia in a title eliminator to earn the right to a shot at divisional ruler and pound-for-pound king Anderson Silva. Marquardt has done everything right since his July 2007 defeat to Silva, while Maia has embarrassed his opponents with off-the-charts ground skills.

Strikeforce boss Scott Coker be praised for adding this superb fight to his already arranged Aug. 15 card on short notice. In this showdown, Strikeforce light heavyweight titleholder Sobral will defend his belt against Dream middleweight grand prix winner Mousasi. The aggressive and well-rounded Brazilian represents the first stern test for the rising Armenian star. Mousasi jumped from middleweight to heavyweight to submit former K-1 champion Mark Hunt in Japan in May.

Disappointed by the top pound-for-pound fighter in the world in his last title defense against compatriot Thales Leites, UFC matchmaker Joe Silva has booked Silva into a light heavyweight contest against former 205-pound champion Griffin. With that move, the UFC puts one of its biggest stars (Griffin) at risk of having his stock plunge markedly in defeat. Did the UFC executive have another epiphany -- like the one he had before booking Griffin against Mauricio “Shogun” Rua two years ago -- or will “The Spider” knock out another American on his road to a dream boxing match against Roy Jones Jr.