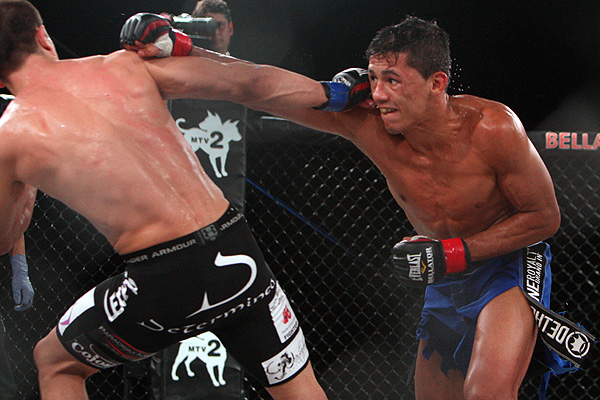 Seven-and-a-half years after the start of “The Ultimate Fighter” revolution, mixed martial arts fans find themselves living in paradise. A big fight highlights almost every weekend and major television networks like Fox are covering a sport that 15 years ago was barely staying alive thanks to pay-per-view, home video releases and the Internet. Nevertheless, plenty of fans are complaining about oversaturation, a watered-down product and the lack of enough star fighters to go around.

What critics should never forget is that MMA is still the greatest sport in the world. Nothing beats going to a live event, and the sport, on the grassroots and independent levels, needs fan support to survive. Many regional promoters are working just as hard as the major players, without the financial windfalls. Why not pick a show nearby, buy a ticket and cheer on the stars of tomorrow? Consider this a guide on where to go.

As always, the list does not focus on the well-promoted main event bouts from major organizations you already know to watch but rather on fights from all over the planet that are worth seeing. Ultimate Fighting Championship, Strikeforce and Bellator Fighting Championships shows are excluded by design.

Rarely do you see a fighter turn down a UFC offer to sign with another promotion. Former Dream featherweight and bantamweight titleholder Fernandes had the courage to do so, which means the three-time Brazilian jiu-jitsu world champion will now compete under the One Fighting Championship banner. His first opponent for the Asian powerhouse will be Australia-based Brazilian expat Falciroli. The 29-year-old is a fellow black belt and the reigning Cage Fighting Championships bantamweight titleholder.

At just 22 years of age, “Dudu” Dantas’ all-out attack on the most recent Bellator bantamweight tournament saw him walk away with $100,000 and cement his reputation as one of the best young lighter-weight fighters in the world. After taking the promotion’s championship with a second-round submission of Zach Makovsky in April, the Nova Uniao standout elected to stay busy by accepting a fight against EliteXC veteran Nam in his native Brazil. The Team Quest fighter is currently riding a three-fight winning streak, with two first-round stoppages.

The lighter weights are on display in the British capital as Ultimate Challenge MMA bantamweight champion Andrews battles the promotion’s interim 135-pound titleholder Hewitt for the newly introduced flyweight strap. Andrews, a teammate of UFC fighters John Hathaway and Karlos Vemola at London Shootfighters, has not exactly been active lately, fighting just three times in the last 36 months. Hewitt, meanwhile, punched his ticket to the title fight with a stunning 10-second knockout of talented prospect Cory Tait in February.

Branch has answered the challenge for Cage Fury Fighting Championships. Since being released from the UFC with a 2-2 record, the Renzo Gracie black belt has not rested on his laurels, as he has stayed active and fought as often as possible, most recently dropping a unanimous decision to fellow Octagon veteran Anthony Johnson in May. Williams will face the toughest challenge of his career here. A brown belt under “Wild” Bill Walters, Williams set the table for the showdown with a third-round stoppage against Andre Gusmao, another UFC castaway and Gracie associate.

Two of the premier bantamweights from the Great White North not yet under UFC employ will go at it in the main event of the Score Fighting Series’ latest installment. Fraser, a 10-year veteran of the sport, has won seven consecutive fights, all by submission. Hill, undefeated at 8-0, has shared fight card space with Fraser on three different occasions. Now they get to lock horns directly, with many wondering whether or not Hill can defend Fraser’s arsenal of chokes. Dalby, a well-rounded 27-year-old Dane, has drawn a ton of hype on the Scandinavian scene. So far in his young career, the Rumble Sports representative has managed to keep an unblemished record in his eight professional fights. Natural lightweight Truscek, who has bounced back and forth between 155 and 170 pounds, will move up in weight again to try and hand Dalby his first defeat on home turf.

Without a doubt the top female fighter not to land on the Invicta Fighting Champions 2 lineup, Eye returns to her old North American Allied Fight Series stomping grounds to take on 2009 HOOKnSHOOT grand prix finalist Magana. “Evil” Eye has been the more active of the two ladies, reeling off four straight decision wins in the past 12 months, including two with Bellator. Because of her activity, she enters this fantastic flyweight fight as the slight favorite. Still, Magana has more than five years of professional experience under her belt and has won five of her last six bouts.

Arguably the top two American expats still holding their ground in Japanese MMA, Ohio’s Shores and Hawaii’s DeLumeau will square off against one another as part of the ninth stop on Pancrase’s Progress Tour. Shores had his shot at the Pancrase crown in June but suffered the first defeat of his career at the hands of Takumi Nakayama. Delumeau, currently ranked third inside the organization, has not tasted defeat in more than three years and feels it is now his turn to challenge the champion. First, he has to make it past his compatriot.

Every once in a while, a fight comes along that is too close to call. Canada’s longest-running active promotion has just such a bout on its hands here. In the middleweight division, “The Ultimate Fighter” Season 11 participant Henle will put his undefeated record on the line against Canadian submission master Harris. Henle has developed nicely since his time on the reality show, but Harris has put together a streak of nine consecutive first-round submissions.

Fans of grappling phenom Estima have stopped counting the times the 32-year-old was supposed to make his professional MMA debut. Now the waiting is supposed to finally come to an end, as the three-time Brazilian jiu-jitsu world champion will take on Holland, a veteran of the Southwestern circuit. Most recently, the 36-year-old knockout artist stopped former Strikeforce middleweight contender Phil Baroni in the main event of Ring of Fire 43. Does this striker-versus-grappler matchup end in a KO or a submission?