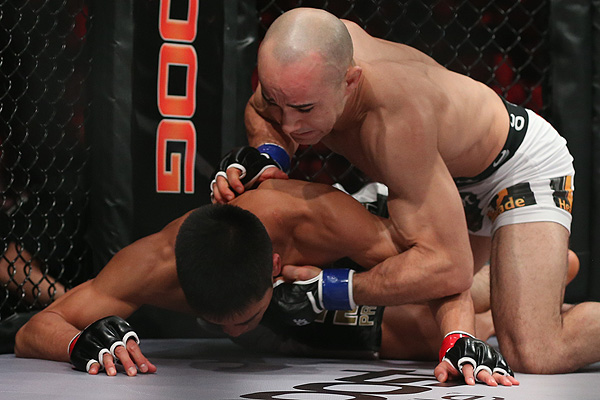 Marlon Moraes is on the rise at 135 pounds. | Photo: Dave Mandel/Sherdog.com


This list does not focus on the well-promoted main event bouts from major organizations you already know to watch, but rather on fights from all over the planet that are worth seeing. Ultimate Fighting Championship and Bellator MMA cards are excluded by design ...

In less than a year, Marlon Moraes went from relative unknown to bantamweight royalty.

Moraes will put his world ranking and four-fight winning streak on the line when he meets once-beaten newcomer Brandon Hempleman in a bantamweight showcase at World Series of Fighting 4 on Saturday at the Citizens Bank Arena in Ontario, Calif. The event will air live on the NBC Sports network at 10:30 p.m. ET/7:30 p.m. PT, and the event's undercard streams live and free on Sherdog.com.

Buoyed by a lengthy background in muay Thai and Brazilian jiu-jitsu, Moraes burst on the global scene with consecutive wins against former World Extreme Cagefighting champion Miguel Torres and highly regarded Sports Lab export Tyson Nam. The 25-year-old last fought at World Series of Fighting 3 in March, when he needed less than three minutes to dispatch Nam with strikes at the Revel Resort and Casino in Atlantic City, N.J. The performance against Nam, who had seven months earlier throttled Bellator titleholder Eduardo Dantas, alerted many to Moraes’ presence. He attacked with aggressive punches and kicks, particularly to the legs. The Florida-based Moraes then floored Nam with a grazing head kick, followed him to the canvas and put him away.

Hempleman trains in Idaho and enters his promotional debut with some momentum of his own, having pieced together a streak of six straight victories. He last fought under the Cage Warriors Fighting Championship banner in December, when he outpointed seasoned Irishman Paul McVeigh by unanimous decision at Kelvin Hall in Glasgow, Scotland.

The Moraes-Hempleman clash is but one under-the-radar matchup worth monitoring. Here are nine more:

Former Shooto 115-pound champion Somdet will carry a nine-fight winning streak into his PXC debut. Viewed by many as the world’s premier strawweight, the 38-year-old muay Thai legend has not lost since he dropped a unanimous decision to Darren Uyenoyama in June 2002. Somdet last competed in October, when he outpointed Takuya Eizumi under the Grabaka banner in Japan. Nicknamed “The Rock,” Catalan has won three of his first four professional bouts.

A semifinalist on Season 13 of “The Ultimate Fighter,” O’Neil has compiled a 3-1 mark since his one-bout audition with the UFC ended in a decision loss to Chris Cope at “The Ultimate Fighter 13” Finale. The 27-year-old Falmouth, Mass., native has trained alongside John Howard, Joe Lauzon, Rick Hawn and other prominent figures on the MMA scene in the American northeast and owns an October 2011 victory over Marcus Davis. Team Link’s de Freitas sharpened his claws inside the Jungle Fight promotion in his native Brazil and has won twice in his past three appearances.

Heavyweight prospects tend to command attention in mixed martial arts. Mocco wrestled collegiately at the University of Iowa and Oklahoma State University, reaching the NCAA finals three times and winning two national championships. The North Bergen, N.J., native qualified for the United States Olympic team in 2008 and nearly medaled at the Summer Games in Beijing. Mocco, who has thrown out his anchor at American Top Team, has made a seamless transition to MMA; the 31-year-old submitted his first two opponents, one with a kimura and the other with a north-south choke. Like Mocco, Wilson rides a modest 2-0 mark into his first Resurrection Fighting Alliance appearance.

The vacant Cage Fury Fighting Championships lightweight crown will be up for grabs when AMA Fight Club’s Brenneman tackles Baker in the CFFC 26 headliner. The 32-year-old Brenneman holds a perfect 3-0 record since being released by the UFC following consecutive losses to Erick Silva and Kyle Noke, having successfully downshifted to 155 pounds. Known for a punishing and relentless clinch game, Baker, 32, has not tasted victory in nearly two years.

Former Bellator champion Soto has resumed his career after a detached retina suffered in a September 2010 defeat to Joe Warren threatened to bring it to a premature end. Anchored at David Terrell’s Nor-Cal Fighting Alliance, the 26-year-old has won his last two fights, both by choke-induced submission. A mainstay of the Gladiator Challenge promotion, Turner will hit the Tachi Palace Fights stage for the first time and will do so on the strength of a career-best four-fight winning streak.

As Buentello approaches the age of 40, he will look to redefine himself as a light heavyweight. Since debuting in April 1997, the 39-year-old Grudge Training Center export has competed in 19 different promotions across four countries, fighting for heavyweight gold in both the UFC and Strikeforce. Buentello will enter his first Legacy Fighting Championship bout with three straight wins in his back pocket. A graduate of Season 10 of “The Ultimate Fighter,” McSweeney has finished five of his last six opponents inside one round and fills in here for the injured Marcus Sursa.

With connections to Nova Uniao, Diniz has become a person of interest on the regional scene at 135 and 145 pounds. Nicknamed “The Nightmare,” the 29-year-old Brazilian has suffered only one defeat in his last 13 fights: a unanimous decision to former two-division Dream champion and current interim One Fighting Championship bantamweight titleholder Bibiano Fernandes in December 2011. Lisita, who trains out of Phuket Top Team in Thailand, has secured eight of his 11 professional victories by knockout, technical knockout or submission.

Kikuno has spent his entire 27-fight career inside his native Japan. While the former Deep lightweight champion has come up short in high-profile matchups with Satoru Kitaoka, Mizuto Hirota, Gesias Cavalcante and Eddie Alvarez, his crescent kick remains one of MMA’s most picturesque and effective weapons. The 31-year-old has been on quite a tear, having finished his last three opponents in 67 seconds or less. The South Korea-based Lee favors the standup and has posted wins in five of his past six bouts.

Strickland will put his unblemished record on the line when he defends the King of the Cage middleweight championship against Hernandez. One of the sport’s more promising middleweight prospects, the 21-year-old Strickland has finished nine of his 12 wins, seven of them in the first round. The Riverside, Calif., middleweight debuted as a teenager in 2008 and quickly drew attention with his devastating knockout power. Hernandez carries a 7-2 mark over his last nine fights.