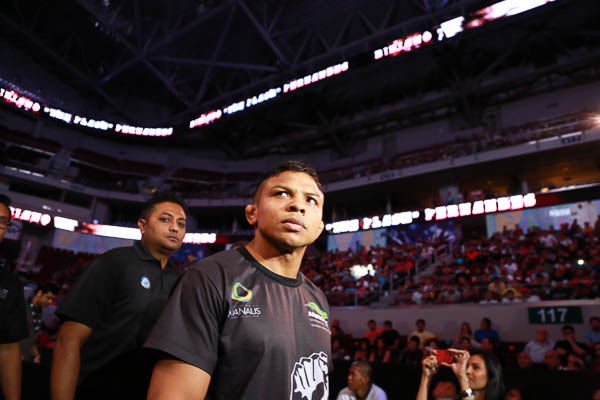 Bibiano Fernandes has not lost since December 2010. | Photo: Taro Irei/Sherdog.com

Bibiano Fernandes remains content to ply his trade outside of the UFC’s sphere of influence.

Fernandes will defend his One Fighting Championship bantamweight crown against the unbeaten Dae Hwan Kim in the One FC 23 “Warrior’s Way” headliner on Dec. 5 at the Mall of Asia Arena in Manila, Philippines. The 34-year-old Brazilian champion will carry a career-best eight-fight winning streak into the cage.

A former two-division Dream titleholder, Fernandes turned down a contract offer from the Ultimate Fighting Championship in 2012 and instead signed with One FC. He has since rattled off three straight five-round decisions, capturing the Singapore-based organization’s interim 135-pound belt against Koetsu Okazaki before winning a unification bout against Soo-Chul Kim. Fernandes -- who has not lost in nearly four years -- last competed at One FC 15 in May, as he took a unanimous verdict from Maskatsu Ueda.

Kim has won four straight fights since his October 2011 encounter with Koji Yoshida ended in a draw. The 27-year-old South Korean has delivered seven of his 10 career victories by knockout, technical knockout or submission, scoring five first-round finishes along the way. Kim last fought at One FC 14 in March, when he coaxed a tapout from Kevin Belingon with a rear-naked choke at Stadium Negara in Kuala Lumpur, Malaysia.

The Fernandes-Kim title clash is but one under-the-radar matchup worth monitoring during the month of December. Here are nine more:

The unbeaten Bennett’s stock continues to climb. The 30-year-old Pit Elevated representative has finished four of her five professional victories and owns a February 2013 decision win over “The Ultimate Fighter” Season 18 winner Julianna Pena. Bennett made her Invicta Fighting Championships debut in September and did not disappoint, as she put away Michelle Ould with a second-round body kick and follow-up punches. Maia, a rising 26-year-old product of the Chute Boxe camp, will enter the cage on the strength of a two-fight winning streak, with victories over Jessica Andrade and Zoila Frausto Gurgel already in her back pocket.

Frazatto meets Murphy in a high-stakes co-main event. The once-defeated Frazatto made his first appearance under the Resurrection Fighting Alliance banner in August, when he needed all of 92 seconds to submit Cory Galloway with a triangle choke. The 30-year-old has trained extensively with Team Nogueira and the Atos Team. A two-time Brazilian jiu-jitsu national champion, Frazatto holds the rank of black belt in the discipline under Roberto Godoi. He announced his intention in 2013 to transition to MMA full-time and has gone 2-1 since, a split decision loss to Bruno Tavares the lone misstep. A World Series of Fighting alum and Cleber Luciano protégé, Murphy bounced back from his first career setback -- a unanimous decision loss to Carson Beebe -- with a split verdict over Victor Henry at a Fight Club OC event in April.

One of England’s prized prospects, Gahadza will put his perfect 14-0 record on the line in his British Association of Mixed Martial Arts debut. The 27-year-old Zimbabwe native has drawn favorable comparisons to current UFC light heavyweight Jimi Manuwa, as he has carved a swathe of destruction through regional competition with 11 finishes inside one round. Strength of schedule remains a question mark for Gahadza, as his past five opponents have 90 losses between them. Lebout, a promising 27-year-old Frenchman, has rattled off five straight wins and could provide Gahadza with his sternest test to date.

Mamed Khalidov and Mariusz Pudzianowski are the bigger box-office draws, but Gamrot might have the highest upside of anyone on the KSW 29 roster. The 23-year-old Pole has not yet branched out beyond Europe but holds an unblemished 7-0 record, with four finishes and three one-sided unanimous decisions. Gamrot last appeared at a Cage Warriors Fighting Championship event in September, when he submitted Tim Newman with a first-round heel hook. Chlewicki, 35, is 11-2-1 in his past 14 outings, losing only to UFC veterans Paul Daley and Demian Maia.

Heavyweight prospects are said to be worth their weight in gold, so it is easy to understand the intrigue surrounding Goltsov. The 24-year-old Russian sambo practitioner enters his latest match on a seven-fight winning streak, having recently toppled Strikeforce and Bellator MMA alum Brett Rogers. The 6-foot-5 Goltsov sports 60-, 85- and 86-second finishes on his resume. In Cisse, he confronts an undefeated Frenchman with a 10-0 record and nine of his wins coming via knockout, technical knockout or submission.

Former M-1 Global lightweight champion Khamanaev finds himself on a seven-fight tear that includes a heel hook-induced submission on Bellator Season 10 tournament winner Daniel Weichel in June 2012. Wrestling and devastating ground-and-pound are at the heart of the 27-year-old Chechen’s success, and those skills have made him one of the sport’s premier prospects at 155 pounds. Khamanaev trains alongside current UFC featherweight Zubaira Tukhugov at a government-backed facility in his native Chechnya. Swain, 23, operates out of the American Kickboxing Academy and has tested himself inside the King of the Cage, Pancrase, Maximum Fighting Championship and Resurrection Fighting Alliance organizations.

Green arrived in Titan Fighting Championship with violent consequences in October, as he wiped out former World Extreme Cagefighting champion Miguel Torres in just 46 seconds. “The Predator” was a two-time Mid-American Conference wrestling champion at the University of Buffalo before transitioning to MMA, and while the 25-year-old remains a work in progress, he seems poised for a breakthrough at 145 pounds. A Team Bombsquad representative, Green has posted four wins over his last five appearances. Siler was released by the UFC following consecutive defeats to Dennis Bermudez, Rony Mariano Bezerra and Noad Lahat.

Widely regarded as one of the top 10-15 welterweight prospects in the sport, Khaliev launched his pro career in October 2010 and has compiled a stellar 11-1 record since, a split decision loss to Yasubey Enomoto the only blemish. The younger brother of Adam Khaliev, who has already signed with the UFC, the 26-year-old has pieced together a three-fight winning streak since his defeat to Enomoto, finishing all three inside one round. A well-traveled journeyman who has fought inside the World Series of Fighting and Cage Fury Fighting Championships promotions, Dixon, 36, has lost three of his last four bouts.

Kobayasha has become one of the bright lights on the Japanese MMA scene. Unbeaten since 2010, the 26-year-old Sakaguchi Dojo representative and lightweight King of Pancrase last competed under the Vale Tudo Japan banner in October, when he claimed a unanimous decision against two-time Shooto champion “Lion” Takeshi Inoue. Kobayashi suffered the only defeat of his career in 2010, dropping a unanimous decision to onetime One Fighting Championship titleholder Koji Oishi -- it was a loss he later avenged. Yokota, 36, will enter their New Year’s Eve showdown riding a nine-fight winning streak. Victories over former International Fight League champion Ryan Schultz and UFC vets Michihiro Omigawa, Mizuto Hirota, Leonardo Santos and Eiji Mitsuoka anchor his 29-fight resume.