Gunnar Nelson will fight for the first time in more than a year on Feb. 25. | Photo: Haraldur Nelson


More than a year has passed since Gunnar Nelson tested his wares on the mixed martial arts scene. His sabbatical did nothing to dim the hype surrounding him.

The 23-year-old Icelandic export makes his presence felt in our monthly “10 Tussles” series, as we take you around the globe in an effort to broaden your MMA horizons, showcasing the best fights and fighters that might not get much attention otherwise.

As always, the list does not focus on the well-promoted main event bouts from major organizations you already know to watch but rather on fights from all over the planet that are worth seeing. The UFC, Strikeforce, Dream and Bellator Fighting Championships shows are excluded by design.

Lauded by the grappling community, Iceland’s Nelson has distinct ideas about the direction of his MMA career. Taking sabbaticals from cage fighting in 2009 and 2011 to focus solely on his Brazilian jiu-jitsu skills, the 23-year-old wunderkind has delivered on the tatami, where he medaled in both the Mundials and the Pan-American Championships. Standing in the way of a successful Nelson MMA comeback is Butenko, an Alexey Oleinik student. The 26-year-old is no slouch on the ground himself, boasting 10 submission wins.

In a featherweight clash, top Korean 145-pounder Kwon will take on undefeated Filipino submission specialist Banario. The 30-year-old Team Posse fighter was originally supposed to face Banario’s countryman, Eric Kelly, but “The Natural” had to pull out of the fight due to personal issues. The bout will featured as the co-headliner in One Fighting Championships’ sophomore event in Jakarta, Indonesia. “Battle of Heroes” will serve as a prelude to One FC 3, the promotion’s next major show. It will once again take place at the 12,000-seat Singapore Indoor Stadium.

One can see the power balance in the world of mixed martial arts shifting when two-time K-1 World Grand Prix finalist Jerome Le Banner -- who took home six-figure purses in his prime in Japan -- accepts bookings in Poland. Needing to give its top stars, Mariusz Pudzianowski and Mamed Khalidov, a break, KSW called the charismatic Frenchman into an MMA bout against domestic kickboxer-turned-mixed martial artist Rozalski. The 33-year-old heavyweight made his MMA debut in 2011, stopping Marcin Bartkiewicz and Sergey Shemetov in back-to-back bouts.

The road to the UFC can be long and rocky, especially if the nationality one’s passport reads “Brazilian.” With so much talent from the Sugar Loaf trying to make it into the Promised Land -- i.e. the Octagon -- a fighter can win 10 fights in a row against quality opposition and still not get the call. Such is the case for Team Nogueira member Paulo “Bananada.” He will look to make it 11 straight against another gentlemen of interest. Robinson has managed and trained himself to wins over UFC veterans David Kaplan and John Gunderson. 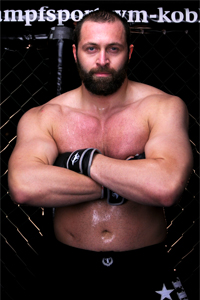 Cage Warriors Fighting Championship was proclaimed dead after a single event in 2009, but new director Graham Boylan has done a marvelous job of changing the direction of the British promotion. Cage Warriors has eight events scheduled for the first half of 2012.

Southern Brazil promotion Nitrix has successfully established its presence in and around Balneario Camboriu, featuring outstanding fighters such as Nazareno Malegarie, Maiquel Falcao and Genair da Silva. Headlining its 10th numbered event will be Rafael “Morcego” and CM System’s D’Avila. Morcego is currently enjoying a six-fight winning streak, with his last defeat coming against D’Avila. A Cristiano Marcello protégé, D’Avila has been on fire the last two years, winning six of his past seven fights.

Two highly specialized heavyweight kickboxers will collide at Draka “Governor’s Cup 2012.” Latvia’s Gluhov possesses some of the nastiest liver shots in all of MMA, but six- and eight-fight winning streaks have not yet yielded a UFC berth. Australian chief Graham plans on countering with his unique use of elbow strikes. The 36-year-old K-1 and Sengoku Raiden Championship veteran knocked out American Carter Williams and former Deep champion Yusuke Kawaguchi with elbows in back-to-back fights in 2010.

“The Ultimate Fighter 2” alumnus Burkman had a successful start to his UFC career, as he won five of his first seven fights between 2005 and 2007. However, a trio of 2008 losses saw him axed from the promotion. Ever since, the 31-year-old wrestler has tried to climb his way back onto center stage. Coming off his first loss outside of the Octagon since his UFC stint, “The People’s Warrior” will take on knockout artist Adzitso. The Togolese fighter came to the United States at age 15 and enters the match on the strength of back-to-back knockouts over UFC veterans Kevin Burns and Brandon Melendez.

Korean prodigy Choi has been one of the few positive discoveries in Japanese MMA in the last year. The 20-year-old shook up the establishment with ear-splitting knockouts against former Deep lightweight champion Nobuhiro Obiya and former Shooto Pacific Rim welterweight champion Mitsuhiro Ishida. Deep boss Shigeru Saeki again ups the difficulty level for the young fighter by matching him with another former Deep titleholder -- longtime Sengoku stalwart Yokota. The 33-year-old judo black belt erased a disastrous 2010 campaign with a pair of wins over ex-King of Pancrase Shoji Maruyama and Shooto mainstay Katsuya Toida.

American Top Team’s Aguilar could have challenged Megumi Fujii for female flyweight supremacy, if not for her razor-thin defeat to Zoila Gurgel in September 2010. The 29-year-old submission specialist has put together a new three-fight winning streak and will put it on the line against Oregon grappler Vidonic. Aguilar will be a major step up in competition for “Little Patricia,” who had a stellar 2011 campaign, as she went 4-0. One streak will have to end, as the ladies throw down in Florida.