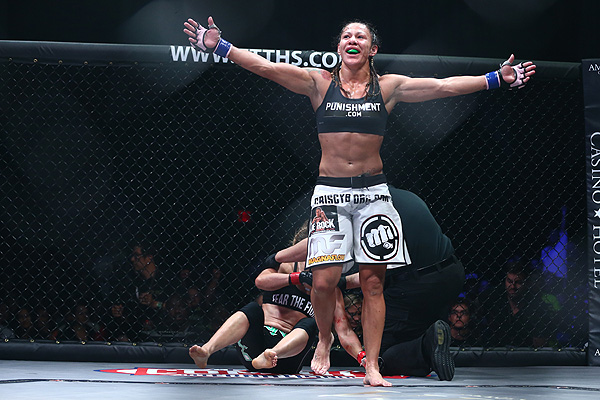 Ronda Rousey may be the brightest star in the women’s MMA universe, but Cristiane Justino remains its most polarizing -- and perhaps compelling -- figure.

“Cyborg” will return to the cage for the first time in almost two years on Feb. 27, when she defends her featherweight title against Charmaine Tweet in the Invicta Fighting Championships 11 main event at the Shrine Auditorium in Los Angeles. The event will stream in its entirety to UFC Fight Pass.

Justino, 29, has rattled off back-to-back wins since being suspended by the California State Athletic Commission in 2011 following a positive test for an anabolic steroid. A former Strikeforce champion spawned by the revered Chute Boxe camp in her native Brazil, she has delivered 10 of her 12 professional victories by knockout or technical knockout. Justino last appeared at Invicta 6 in July 2013, when she put away Marloes Coenen with fourth-round punches and elbows to capture the inaugural Invicta Fighting Championships featherweight crown. Wins over Coenen (twice), Shayna Baszler and Gina Carano anchor the Brazilian’s stellar resume. Talk of a possible jump to the Ultimate Fighting Championship continues to swirl.

Tweet has won five of her past six bouts. The 37-year-old Canadian last competed at Invicta 8 in September, when she dispatched Veronica Rothenhausler with first-round punches and elbows. Tweet has secured five of her six career wins by choke-induced submission.

The Justino-Tweet title clash is but one under-the-radar matchup worth monitoring during the month of February. Here are nine more:

Velasco and Conceicao will duke it out for the vacant Tachi Palace Fights bantamweight championship. A Last Stand Fight Team representative, Velasco will enter the cage on a five-fight winning streak, his most recent conquest resulting in an arm-triangle choke technical submission against Sergio Cortez in November. Conceicao, a 26-year-old X-Gym export, replaced an injured Jeremiah Labiano on short notice. He has recorded 18 of his 24 pro wins by knockout, technical knockout or submission and will step into his organizational debut on the strength of an 8-1 mark over his past nine outings. Tachi Palace Fights 22 will stream live to Sherdog.com.

Checco still holds plenty of promise. The 28-year-old Brazilian middleweight will try to bounce back from his first professional defeat when he collides with Henle in the RFA 23 co-main event. Checco saw his run as an undefeated fighter grind to a halt in October, when he submitted to a rear-naked choke from Jake Collier in a showdown for vacant Resurrection Fighting Alliance gold; Collier later signed with the UFC. Having trained out of the Chute Boxe, Syndicate MMA, Gracie Humaita and Xtreme Couture camps, Checco has finished all seven of his victories, four of them inside one round. Reign MMA’s Henle has won six of his last seven bouts, losing only to former Maximum Fighting Championship titleholder Elvis Mutapcic.

The Maine-based New England Fights promotion appears to have a diamond in the rough with Wood. A perfect 5-0 with five finishes, the man they refer to as “All Business” will next defend his NEF featherweight championship against Morrison -- a well-traveled and seasoned 30-year-old who has seen action inside the Bellator and World Extreme Cagefighting organizations. Wood, 25, last competed at NEF 14 in September, when he took care of Gabriel Baino with second-round punches. He now operates out of the same Revolution MMA camp in South Carolina as 2004 Olympic silver medalist Sara McMann. Morrison, meanwhile, has pieced together a modest two-fight winning streak, but “Cheesesteak” has not fought in more than a year. Ueda will compete for the first time since his failed bid to unseat One Fighting Championship bantamweight titleholder Bibiano Fernandes in May. Now 37, the former Shooto champion has yet to suffer consecutive defeats over a decorated career that stretches back to 2005. Ueda has never been much of a finisher -- his 12 decision wins are evidence enough -- but no one can argue with his success. He remains one of Japan’s most accomplished and respected bantamweights, having defeated Eduardo Dantas, Kyoji Horiguchi, Jens Pulver, Rumina Sato and Royler Gracie. The once-beaten Henry shined in his Grandslam MMA debut in July, when he stopped Dream veteran Hideo Tokoro on second-round punches.

A five-time combat sambo national champion in his native France, Duquesnoy is regarded by some as MMA’s top prospect at 145 pounds. The 21-year-old Frenchman will put his British Association of Mixed Martial Arts featherweight championship on the line against the intriguing Klaczek -- a Pole who has won five straight fights, three of them finishes -- in the BAMMA 18 headliner. Duquesnoy’s five-fight winning streak was brought to an unceremonious end in his Sept. 13 encounter with Ashleigh Grimshaw, as an inadvertent low blow resulted in a no-contest after just 11 seconds. The “Fire Kid” in 2013 suffered his only pro defeat to Makwan Amirkhani, the charismatic Finnish export who burst on the global scene with an eight-second technical knockout on Andy Ogle at UFC on Fox 14.

M-1 Global will bring out two of its biggest guns, as Smoldarev and Perak headline an event being held in honor of Guram Gugenishvili -- the talented Georgian heavyweight who was killed in a car accident in November at the age of 28. Smoldarev experienced his first career setback at M-1 Challenge 53 some three months ago, as he succumbed to a rear-naked choke from the unbeaten Marcin Tybura. The 24-year-old Estonian has secured seven of his nine career wins by knockout, technical knockout or submission and remains one of Europe’s most prized heavyweight prospects. Perak’s only four professional losses have come to Tybura, Jeff Monson, Jordan Radev and Jan Blachowicz.

Gamrot continues his climb on the lightweight ladder in Europe. The 24-year-old Pole last competed at KSW 29 in December, when he captured a unanimous verdict from Lukasz Chlewicki at the Krakow Arena in Krakow, Poland. Gamrot has yet to be sternly tested, with four finishes and four unanimous decisions under his belt. The Cage Warriors Fighting Championship alum owns a 4-0 record in KSW. Correia, 31, is 11-1 over his past 12 appearances, a submission loss to Polish submission savant Marcin Held inside Bellator his lone misstep. The Brazilian striker sports nine first-round finishes on his resume.

One of Japan’s rising young stars, Hatta will defend his Zst flyweight championship against Ito at the Differ Ariake in Tokyo. The 23-year-old has spent his entire career in the Zst organization, compiling an 8-0 record with seven submissions: two by armbar and one each via guillotine choke, rear-naked choke, triangle choke, leg scissor choke and heel hook. Hatta last fought at Zst 42 in August, when he put away Tatsuya Watanabe with a fourth-round armbar. Ito, 21, will enter the match on a six-fight unbeaten streak.

Invicta Fighting Championships has elected to pit two of its blue-chip prospects against one another, as the undefeated Grasso meets Japanese prodigy Inoue. Grasso, 21, improved to 6-0 at Invicta 10 in December, when she wrecked Alida Gray with first-round punches and announced her presence in the 115-pound division. The Mexican export also sports 12-, 15- and 36-second stoppages on her unblemished ledger. Inoue, who will not turn 21 until August, has been on the global MMA radar for some time now. She has not competed since winding up on the wrong side of a split decision against Karolina Kowalkiewicz at Invicta 9 in November.