Here’s something wonderful about disavowing any responsibility to your fellow man: You can throw any two people in a ring, instruct them to smack each other in the head until one falls down and then count the gate receipts. (Toughman’s Art Dore -- your patron saint.)

There are several things to enjoy about the country of Japan -- the food, the pursuit of technological advances, seizure-inducing metropolitan designs -- but uniformly competitive prizefighting is not one of them. For every card like last weekend’s Sengoku 8, there will be a companion event enlisting morbidly obese sumo, ill-prepared actors or -- and may God not make a collective judgment on all humanity -- Jose Canseco.

Not that we’re necessarily any more evolved. Fox gave us multiple installments of “Celebrity Boxing.” But when we subject Todd Bridges to a beating, at least we make him wear headgear.

No such luck in Japan. Ten matches that any athletic commission would’ve projectile-vomited up:

A proud tradition in Japan, sumo is nonetheless the only major sport that requires its athletes be morbidly obese. Good work if you can get it.

Any other career that mandates a degree of mobility, though, is going to be a big problem. And while the nightmare of a 600-pound Chad Rowan in mount is nothing to sneeze at -- your lungs would be too compressed, for one thing -- he’s still a stationary target, easily manipulated by the skilled grappling of Royce Gracie.

Gracie got the submission (a wrist lock, for God’s sake) via beaching.

Question his work ethic or his off-hours habit of waking up in jail, but Charles Bennett is an athlete. And while his style is often very pregnable, when he connects, he can really ruin your day. Ask Karl James Noons, former EliteXC lightweight champion and accomplished striker, whom Bennett knocked cold.

Kaneko is a Japanese film and television actor. For reasons that almost certainly involved a substantial amount of money, he agreed to fight Bennett, then a veteran of 27 bouts. Bennett, displaying compassion either organic or advised, submitted him with an armbar instead of making his brain bleed.

Kaneko might be Japan’s version of Mickey Rourke, taking a sabbatical from acting to try his hand in a field that really didn’t require his participation. He lost his next two fights, then returned to performing. 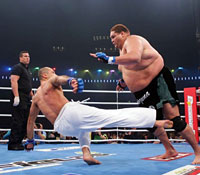 Choi, who recently made headlines for a proposed bout with Canseco on May 26, is over seven feet tall; Kanennorsing is five-foot-eleven and weighs roughly half of Choi’s 328 pounds.

In Japan, this is the kind of tape tale that makes a match a foregone conclusion.

Kaennorsing circled Choi for four rounds of kickboxing, craning his neck to look at Choi’s untouchable head. “Going high” meant Kaennorsing would aim for the ribs, though he did get some altitude on one high kick that landed on Choi’s jaw. This made the big man chuckle. Choi went on to win a decision.

Kanennorsing is an endless resource of ring courage. Despite his small stature, he’s defeated the enormous “Mighty” Mo and went the distance with professional boxer Francois Botha. This is still possibly the most absurd thing I’ve ever seen.

Somehow, someone forgot to call Eric Esch and tell him to report for duty as a James Bond henchman. Over 400 pounds, bald and stout, he looks as if he should be trailing Roger Moore in an underground lair before getting tipped into a pool of sharks.

But the call didn’t come. So Esch went into boxing, first as a ringer for a series of club fights against sloppy, haymaker-obsessed goons and then in four-round professional bouts. Heavy hands and malformed looks go a long way in Japan, and soon Esch was enlisted for an MMA match against lightweight Genki Sudo.

Of course he was.

Sudo danced for a round before snaring Esch’s cankle in a heel hook. There’s some small measure of satisfaction in watching a good little guy beat a no-necked ox, but the fact that organizers accepted the possibility Sudo could’ve gotten his head knocked off is kind of chilling.

Professional wrestlers -- particularly those with legitimate athletic credentials that don’t involve getting a staple gun to the crotch -- are pursuing MMA with increasing frequency; chalk it up to a desire to compete, a less hectic schedule and an influx of cash.

In 1996, though, few stateside wrestlers would’ve considered getting cranked in a shoot fight and risking their reputations for minimal payoff. “Bam Bam” Bigelow was the exception. For a kid growing up on a diet of WWF histrionics, he represented an early cross-pollination between sports entertainment and full contact.

It was not nature’s greatest idea. Bigelow took on a familiar UFC face in Hawaiian bruiser Kimo and proceeded to get pummeled from the mount -- a bare-fist buffet -- for an uncomfortably long time before submitting to a rear-naked choke.

While Bigelow was undoubtedly a tough guy, his fighting skill set -- even for an era as primitive as the mid-’90s -- was skeletal at best. Athletes who appear on ice cream sandwich bars are not necessarily the most equipped for the cage.