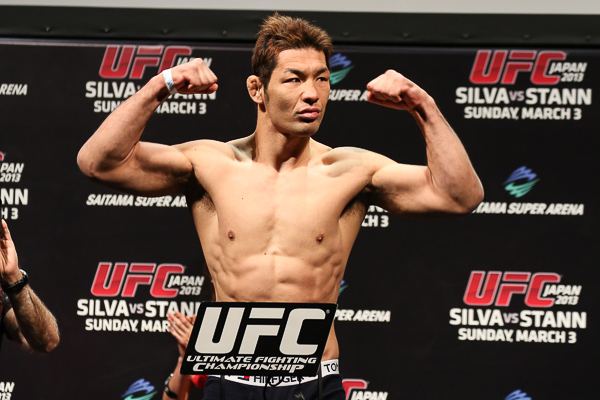 Riki Fukuda was cut by the UFC in March. | Photo: Taro Irei/Sherdog.com

After a five-fight stint in the UFC yielded mixed results, Riki Fukuda has returned to his roots on the Asian mixed martial arts scene.

A Dream, EliteXC and Pancrase alum, Fukuda last appeared at UFC on Fuel TV 8 in March, when he dropped a unanimous decision to the surging Brad Tavares at the Saitama Super Arena in Saitama, Japan. He later tested positive for the banned stimulants phenylpropanolamine, norpseudoephedrine and ephedrine, resulting in his release from the UFC. Fukuda never recorded back-to-back victories inside the Octagon, alternating wins over Steve Cantwell and Tom DeBlass with losses to Nick Ring, Costas Philippou and the aforementioned Tavares. All five of his UFC bouts went the distance.

Kim will carry a modest two-fight winning streak into the match. The 26-year-old Korean has not competed since he stopped Shoma Shibisai on a first-round technical knockout at a Heat event more than a year ago. Kim has delivered five of his six career victories by knockout, technical knockout or submission and owns a 2-1 mark inside the Road FC organization. A Team Posse representative, he trains alongside Road FC lightweight champion Yui Chul Nam.

The Fukuda-Kim showdown is but one under-the-radar matchup worth monitoring during the month of January. Here are nine more:

A finalist on Season 9 of “The Ultimate Fighter” reality series, Johnson now finds himself struggling to keep his head above water. The 31-year-old Jeremy Horn protégé suffered his fourth straight loss on Nov. 2, when he wound up on the wrong side of a split verdict against Ian Williams at Cage Warrior Combat 9. Romero has carved out a nice niche on the regional circuit. The 33-year-old Minnesota Fight Factory export will ride a four-fight winning streak into his return to the Dakota Fighting Championship promotion. Romero sports 20 finishes among his 22 career victories.

Sasaki has emerged as one of Japan’s more intriguing prospects. Unbeaten in his past eight outings, the 24-year-old former Shooto Pacific Rim 132-pound champion last competed at a Vale Tudo Japan show in October, when he needed all of 1:36 to submit Geun Do Park with a rear-naked choke; that finish came on the heels of his 11-second knockout against Kenji Yamamoto. Fujiwara, 31, will enter the bout with some momentum, having recorded back-to-back wins over Hideto Okada and Takumi Murata.

Team Takedown’s Skelly remains a perfect 11-0 as a professional. The 28-year-old Texan last fought at Bellator 98 in June, when he notched a unanimous decision over Jarrod Card at the Winstar World Casino in Thackerville, Okla. Skelly holds a pair of submission victories against former two-division Legacy Fighting Championship titleholder and current UFC featherweight Daniel Pineda. All 13 of Villa’s bouts have ended inside the first or second round, including his August 2008 triumph over Drew Fickett.

Hamilton captured the Maximum Fighting Championship heavyweight crown with a second-round knockout against Smealinho Rama in October and will defend it for the first time when he locks horns with Schoonover in the MFC 39 main event. The Jackson’s Mixed Martial Arts representative has finished his last five foes, four of them inside one round. Schoonover, who competed on Season 10 of “The Ultimate Fighter,” has not fought since he knocked out Alonzo Roane under the Rogue Warrior Championships marquee in September 2012.

The outspoken Kwon has a well-established reputation as one of Korea’s most exciting mixed martial arts exports. The 28-year-old returned from a two-year absence in October, only to be unceremoniously separated from his senses by Koji Nakamura’s head kick and follow-up punches at Road FC 13. Kwon will next welcome former world muay Thai champion Abdollahi to the MMA world. The 31-year-old Iranian serves as the muay Thai instructor for the Epic MMA camp in Hong Kong, where he trains alongside the undefeated Alberto Mina and One Fighting Championship lightweight contender Vuyisile Colossa. 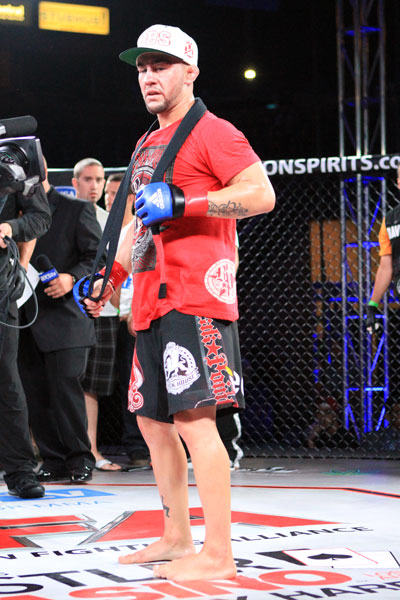 Munhoz will defend his Resurrection Fighting Alliance bantamweight championship against Daniels, a promising but unproven 21-year-old based out of the Ironclad Training Center in Utah. Munhoz, who holds the rank of black belt in Brazilian jiu-jitsu and brown belt in judo, won the RFA title at 135 pounds with a split decision over Jeff Curran in August. He trains under Rafael Cordeiro in California. Daniels, who will enter his RFA debut with an unblemished 7-0 record, cut his teeth inside the Rocky Mountain Fight Championships, Crown Fighting Championships and Showdown Fights organizations.

After a disappointing and rather nondescript two-fight turn in the UFC, Lopez has become something of a forgotten prospect.

The 25-year-old Wanderlei Silva disciple returned from a 16-month hiatus in September, as he threw the brakes on a two-fight losing streak and stopped Brandon Melednez with strikes in the first round of their Showdown Fights 12 encounter. Spawned by the Elite Performance gym, the 31-year-old Castillo has delivered 15 of his 17 professional wins by knockout, technical knockout or submission.

Ring of Combat rings in the New Year by upping the ante for two of its more intriguing talents, as Chris Wade and Pat DeFranco duke it out for promotional gold. A decorated amateur wrestler who earned All-America honors at SUNY Oneonta in New York, Wade has trained extensively with current UFC welterweight Ryan LaFlare, “The Ultimate Fighter” Season 14 finalist Dennis Bermudez and two-time Brazilian jiu-jitsu world champion Marcos Galvao. DeFranco represents the Serra-Longo Fight Team and will carry a two-fight winning streak into his latest appearance. The 26-year-old has spent his entire career inside the Ring of Combat organization.

Cejudo has the tools necessary to become a star. He became the youngest American wrestler ever to strike gold in the Olympics when he did so at the age of 21 in 2008. Cejudo has made a seamless transition from the amateur wrestling world to MMA, as the soon-to-be 27-year-old Californian has started his career with five straight wins. After finishing his first four opponents inside one round, Cejudo went the distance for the first time in October, when he posted a unanimous verdict over Ryan Hollis at Legacy FC 24. Though far less heralded, Garcia, 27, also owns an undefeated record.