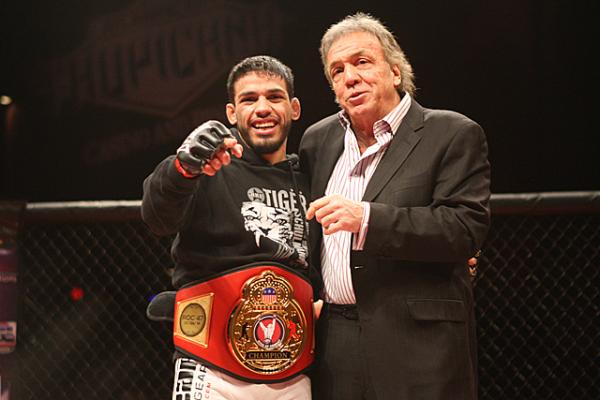 The New Jersey-based Ring of Combat organization has long been lauded as one of the premier regional staging grounds for blue-chip talent. Chris Weidman, Frankie Edgar, Edson Barboza and Jim Miller are among the UFC standouts who have passed through its doors. Perhaps Julio Arce will someday join their ranks.

A Team Tiger Schulmann representative, Arce will put his unbeaten professional record and bantamweight championship on the line against Thomas Vasquez at Ring of Combat 50 on Jan. 23 at the Tropicana Resort and Casino in Atlantic City, N.J. The 25-year-old has appeared in four of the last five Ring of Combat events, entrenching himself as one of the top 135-pound prospects in North America.

Striking forms the foundation for Arce’s skill set. A former New York Golden Gloves champion, he also has experience as a professional boxer and muay Thai fighter. Arce went undefeated as an amateur mixed martial artist -- a victory over “The Ultimate Fighter” alum Anthony Gutierrez included -- before turning pro in 2012 and rattling off six consecutive wins. The 25-year-old last appeared at Ring of Combat 49 in September, when he needed just 2:20 to submit Jake Grigson with a rear-naked choke.

Vasquez will enter the cage on the heels of back-to-back decision losses to Marcos Galvao and Mike Hernandez under the Bellator MMA banner. The 28-year-old sports four finishes among his six victories.

The Arce-Vasquez clash is but one under-the-radar matchup worth monitoring during the month of January. Here are nine more:

The promising Flick has fought just once in the past two years. The 24-year-old flyweight returned from a lengthy layoff in December, scoring a 46-second submission on Sean O’Grady at a Rage on the River show in Tulsa, Okla. It was Flick’s first appearance since a failed bid for Legacy Fighting Championship gold in 2012, when he succumbed to a second-round knee strike and subsequent punches from UFC veteran Will Campuzano. He had won his first six fights, four of them by submission. The once-beaten Ybarra suffered his only career defeat in May 2013, when he was cut down by a Damacio Page punch.

Oropeza made headlines on Jan. 8, when he revealed that he had requested and had been granted his release from Bellator in hopes of drawing the attention of the UFC. The 29-year-old Philadelphia Fight Factory middleweight has finished seven consecutive opponents, six of them inside one round, and has never gone the distance in 14 professional appearances. Oropeza last fought at Bellator 130 in October, when he put away Gary Tapusoa with first-round punches. Woods has alternated between victory and defeat in each of his past six outings.

A Team Takedown stablemate of former UFC welterweight champion Johny Hendricks, Feist will look to rebound from his first career setback in his return to the Xtreme Knockout promotion. The 30-year-old Texas-based Idaho native has not competed since dropping a unanimous verdict to Carlos Diego Ferreira inside the Legacy Fighting Championship organization in 2013. Less than a year later, Ferreira was in the UFC. Feist was a state wrestling champion in high school, where he teamed with Jake Rosholt, and went on to wrestler collegiately at Portland State University. He has secured five of his eight wins by submission. Hill, 32, has rattled off four wins in his last five fights.

Once-defeated Bellator and World Series of Fighting vet Tiller will lock horns with Sursa for the Shamrock Fighting Championships light heavyweight title. The 24-year-old Tiller christened his career with six straight wins, five of them via stoppage, before he ran into Elvis Mutapcic at WSOF 12 in August. There, he dropped a three-round unanimous decision to the former Maximum Fighting Championship titleholder. The well-traveled Sursa, 32, will carry a three-fight winning streak into the match. Seven of his eight losses have come against fighters who have appeared at least once in the UFC: Alan Belcher, Stefan Struve, Eliot Marshall, Josh Bryant, Trevor Prangley, Eddie Sanchez and Logan Clark.

A former Cage Fury Fighting Championships titleholder, Santella returns to the Ring of Combat promotion for the first time in nearly four years. The 30-year-old Ricardo Almeida disciple has not fought since April, when he surrendered his CFFC crown in a unanimous decision loss to Nick Honstein; the setback halted Santella’s run of five wins in a row. In Rizzo, he faces a defending Ring of Combat flyweight champion. “Razor Sharp” Rizzo, 28, has won four of his past five bouts, having avenged his only defeat in that stretch in September, when he submitted Jimmy Grant with a first-round rear-naked choke. 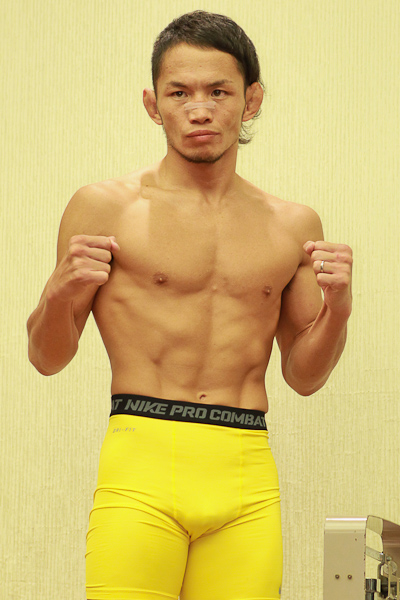 The soon-to-be 40-year-old Uno keeps plugging away in his native Japan. On a six-fight tear, he will challenge Nakamura for the vacant Shooto Pacific Rim lightweight championship in an attempt to further what has become something of a career renaissance. Uno last appeared at Vale Tudo Japan 6 in October, when he submitted Raja Shippen with a rear-naked choke at Ota City General Gymnasium in Tokyo. Having debuted all the way back in 1996, the 39-year-old Uno holds victories over Rumina Sato (twice), Din Thomas (twice), Yves Edwards, Ivan Menjivar, Mitsuhiro Ishida and Dennis Hallman. Mach Dojo’s Nakamura will enter the bout with plenty of his own momentum. The 26-year-old is 7-1 over his past eight appearances.

O’Neil appears to have found his niche in the CES MMA organization. The 29-year-old “Ultimate Fighter 13” graduate will defend his welterweight championship against Walo in the CES MMA 27 headliner. O’Neil has pieced together a three-fight winning streak since suffering a technical knockout loss to Gil de Freitas in 2013. He last appeared in October, when he submitted fellow UFC veteran Ricardo Funch with a second-round armbar. Walo -- who got his start in MMA by joining an Army Combatives class after watching old Ultimate Fighting Championship DVDs to pass the time while he was serving in Iraq -- is unbeaten (7-0-1) over his last eight outings.

Cotton made her first Bellator appearance in October and promptly spoiled the mixed martial arts debut of Canadian boxer Holly Lawson, claiming a unanimous decision on the Bellator 129 undercard. The 26-year-old Nebraskan now returns to the place where she got her start, as she puts her unbeaten record on the line against Makihele inside the Dynasty Combat Sports promotion. Cotton has finished three of her first five foes with strikes. The Utah-based Makihele has touched off her career with back-to-back first-round stoppages. Neither of her opponents lasted two minutes.

Cisse became the latest victim of fast-rising Russian prospect Denis Goltsov in December, when he tapped to a first-round armbar in a Tech-Krep Fighting Championship co-main event. That loss notwithstanding, the once-beaten Frenchman remains a person of intrigue in the 205-pound division, with eight-, 21-, 26- and 67-second finishes on his resume. Merad, meanwhile, saw his career-best six-fight winning streak grind to a halt in October, when he bowed to second-round elbows from former Pride Fighting Championships wrecking ball Rameau Thierry Sokoudjou at Bellator 127.