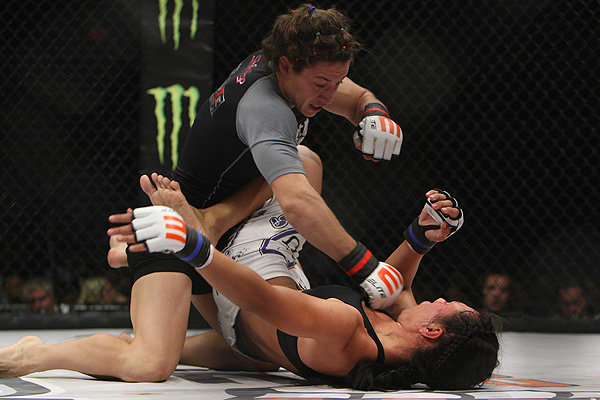 Invicta Fighting Championships will hold its second women’s-only event on July 28 at Memorial Hall in Kansas City, Kan., with an Olympian as its centerpiece. Traditionally, female mixed martial arts was more at home in Japan, but the minds behind Invicta have plans to change that.

In this monthly series, we take readers around the globe in an effort to broaden their MMA horizons, showcasing the best fights and fighters that might not get much attention otherwise. The latest installment features undefeated 2004 Olympic silver medalist Sara McMann, as she continues her climb on the 135-pound ladder.

As always, the list does not focus on the well-promoted main event bouts from major organizations you already know to watch, but rather on fights from all over the planet that are worth seeing. The Ultimate Fighting Championship, Strikeforce and Bellator Fighting Championships cards are excluded by design.

Upstart Texas promoter Jesse Rodriguez has managed to sign a manly main event between two of the Lone Star State’s top 145-pounders for his inaugural show. Skelly, a NAIA All-American and teammate of UFC vets Johny Hendricks and Shane Roller, will put his undefeated record on the line against Carlos “Caique” Elias black belt Luis Vega. Skelly recently returned from an injury-related two-year hiatus to submit journeyman bantamweight Jeremy Myers. Vega will be a different animal, however, as the former welterweight is currently riding a seven-fight win streak.

Even though it boasts two current UFC fighters in Stefan Struve and Michael Kuiper, the Netherlands is not exactly known for being an MMA-keen country. The Dutch prefer their kickboxing instead. Still, regional promotion Fight Club Den Haag offers a nice little scrap between Armenian knockout artist Darpinyan and Brazilian jiu-jitsu black belt Stapel. Unfortunately Stapel, who has fought as low as lightweight in his career, has had a tendency to pull out of fights at the last minute. Fans need to cross their fingers for this intriguing striker-versus-grappler confrontation to go through.

One-time Pancrase bantamweight title contender Kawahara racked up plenty of bad boy points when he did his best Paul Daley impersonation, punching veteran grappler Yuta Numakura after the bell in their March 11 bout. The 24-year-old returns from his seven-week suspension to take on eighth-ranked Shooter Sannai. The 30-year-old submission specialist made the jump from Shooto to Pancrase this year and immediately made an impact, becoming the first fighter to knock out experienced Grabaka ironman Shigeyuki Uchiyama.

King of the Cage flyweight champion Baca will make the first defense of his strap against undefeated challenger Doane. The 26-year-old all-around standout has been on fire ever since he suffered his lone career defeat at the hands of Mamoru Yamaguchi in January 2010, winning his next nine fights and stopping six of his opponents during that stretch. Hawaii native Doane may have the home-field advantage, but the X-1 World Events champion has not fought for a year, so ring rust may be an issue for him. Sometimes there are fights that just have to end in a knockout. Prime examples: Chuck Liddell-Quinton “Rampage” Jackson, Jackson-Wanderlei Silva and Evangelista “Cyborg” Santos-Melvin Manhoef. Top European promotion Cage Warriors has identified the strengths and weaknesses of two of its premier middleweights and booked a fight between Welsh knockout artist Phillips and Moroccan-born French kickboxer Hucin. Both men came up short in the semifinals of the promotion’s middleweight tournament and are looking to redeem themselves.

Hailed as one of the top prospects in his native Poland, 22-year-old grappler Jotko is putting his undefeated record on the line against coeval Frenchman del Guerra. The duo will collide on the main card of Pro Fight’s seventh show. The ambitious Polish promotion uses the most violent set of rules in today’s MMA, allowing stomps, soccer kicks and elbow strikes in all positions. Both fighters will hope for good weather, as the event will take place in an open-air setting at Barlinek’s Municipal Stadium.

After losing an ultra-tight decision to titleholder Ben Askren inside Bellator in October, former International Fight League champion Hieron had to ease off the accelerator for a while. After seeing Xtreme Couture Mixed Martial Arts stablemates Martin Kampmann and Mike Pyle enjoy great success in 2012 so far, “The Thoroughbred” was itching to get back into the cage, as well. The 35-year-old wrestler will face fellow Strikeforce veteran Bronzoulis in the co-headliner of Legacy’s third event this year. The Texans have been pumping out quality shows on a regular basis, and this one promises to be no different.

A regular subject in this column due to its creative matchmaking, Cage Contender has done it again and delivered another highly intriguing inner-European bantamweight bout. Lithuania’s Sitenkov, the No. 1 flyweight in Europe, will make a onetime move back to 135 pounds to take on Top 5 United Kingdom bantamweight Holohan. “The Hooligan” scored a nice win over countryman Damien Rooney in April and gets another serious bump in competition in the form of the most dangerous lower-weight submission master west of Masakazu Imanari.

There was more hype on 21-year-old Shooter Horiguchi than on any Japanese prospect in recent memory after he won the promotion’s 2010 Rookie Tournament and knocked out five consecutive opponents. This was partly due to his flamboyant style and heavy hands but also because of his affiliation with the Krazy Bee camp. Many fans saw him as the natural heir to Norifumi “Kid” Yamamoto. The platinum-blond striker will take on longtime King of Pancrase Inoue in another thrilling prospect-versus-seasoned-vet encounter.

Invicta FC matchmaker Janet Martin has come up with another brilliant main event to headline the promotion’s sophomore event. Making her return from a 19-month hiatus will be Freestyle Cage Fighting bantamweight grand prix winner Baszler. The Josh Barnett pupil will take on 2004 Olympic silver medalist McMann. The 31-year-old world-class athlete joins Invicta from idle ProElite, where she won a unanimous decision over experienced Japanese standout Hitomi Akano in January.