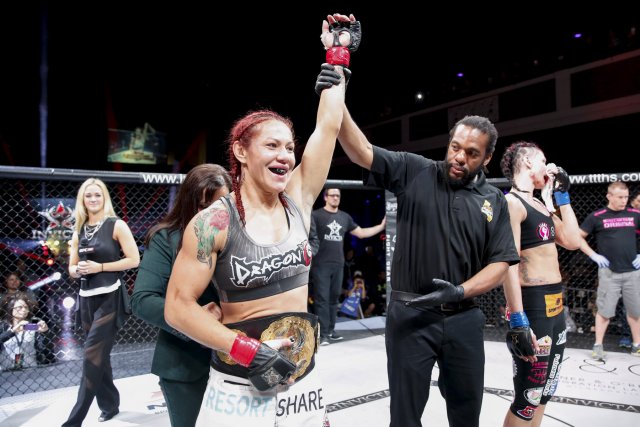 No one has mounted a legitimate threat to Cristiane Justino’s reign. | Photo: Esther Lin/Invicta FC

Wherever she goes, fear and intrigue are sure to follow.

Cristiane Justino will defend her Invicta Fighting Championships featherweight crown -- perhaps for the final time -- against the once-beaten Faith Van Duin in the Invicta 13 main event on July 19 at The Cosmopolitan in Las Vegas. “Cyborg” has already agreed to terms on an Ultimate Fighting Championship contract but must first prove she can meet the 135-pound bantamweight threshold such a move would require. Only then can they pave the way to a much-discussed showdown with UFC champion Ronda Rousey.

Justino has rattled off three straight wins, all of them finishes, since her December 2011 blowout victory over Hiroko Yamanaka was overturned by the California State Athletic Commission following her positive test for anabolic steroids. The 29-year-old Brazilian last competed at Invicta 11 on Feb. 27, when she needed just 46 seconds to dispose of Charmaine Tweet with punches at the Shrine Auditorium in Los Angeles. Justino has secured 11 of her 13 professional victories by knockout or technical knockout, six of them inside one round.

Like virtually every other “Cyborg” opponent, Van Duin will enter the cage as a substantial underdog, viewed as the proverbial lamb being led to slaughter. The New Zealand native made her organizational debut at Invicta 12 on April 24, as she submitted Amanda Bell with a second-round rear-naked choke at the Municipal Auditorium in Kansas City. Van Duin, 29, suffered her only career defeat in August, when she succumbed to a knee strike from Arlene Blencowe -- a woman she had previously beaten.

The “Cyborg”-Van Duin title clash is but one outside-the-major-MMA-bubble matchup worth monitoring during the month of July. Here are nine more: 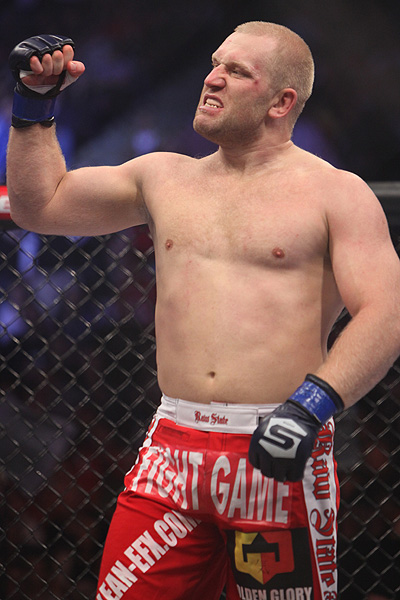 Kharitonov remains one of the most successful heavyweights never to compete in the UFC. The 34-year-old Russian has won four fights in a row, all of them inside the distance, including a third-round TKO against Garner in November. A destructive offensive force, Kharitonov sports 21 finishes among his 22 career victories. The lone win by decision: an October 2005 split verdict over reigning UFC heavyweight champion Fabricio Werdum. A former M-1 Global titleholder, American Top Team’s Garner has posted back-to-back wins against Aslambek Musaev and William Hoffmann since his loss to Kharitonov.

Sklavos will face Burgos in a Resurrection Fighting Alliance co-main event. A 33-year-old Pedro Sauer protégé, Sklavos has won four of his past five bouts, a five-round decision loss to Japanese standout Hiromasa Ogikubo under the Vale Tudo Japan banner the lone misstep. The only other three defeats of his career, all by decision, have come against T.J. Dillashaw, Josh Sampo and Alexis Vila. Sklavos has delivered nine of his 11 professional victories by submission. Burgos, who trains alongside Jeremy Horn at Elite Performance, will enter the cage on a six-fight winning streak.

Once a consensus top 10 bantamweight, Ueda has fallen on hard times. The former Shooto champion failed in his bid to dethrone One Championship titleholder Bibiano Fernandes in May 2014 and then submitted to a third-round kneebar from fast-rising prospect Victor Henry at a Grandslam MMA event on Feb. 8. Ueda, 37, will enter his showdown against Nogueira on the first two-fight losing streak of his career, with doubts swirling about how much he has left in the tank. Renovacao Fight Team’s Nogueira has rattled off four straight wins since his August 2013 encounter with Francisco de Lima Maciel ended in a draw.

Tiburcio will defend the Invicta atomweight title for the first time against the once-beaten Hamasaki. The 22-year-old Tiburcio snatched the 105-pound championship from Michelle Waterson in December, as she submitted “The Karate Hottie” with a third-round guillotine choke. She will step back into action on the strength of four straight wins, three of them by submission. Hamasaki suffered her only career defeat to Nova Uniao’s Claudia Gadelha a little less than two years ago. Wins over Seo Hee Ham (twice), Mizuki Inoue and Emi Fujino bolster her resume.

A cornerstone of the Extreme Fighting Championship Africa promotion, Pena will put his unblemished record and bantamweight championship on the line. The 25-year-old last appeared at EFC Africa 34 in October 2014, when he stopped Francois Groenwald on fourth-round punches. Not much of a finisher to this point in his career, Pena already has five five-round decision wins to his credit. Doyle has pieced together a four-fight winning streak since submitting to a second-round triangle choke from Nkazimulo Zulu in his pro debut two years ago.

A former Brazilian jiu-jitsu world champion based at the MMA Lab in Glendale, Ariz., Mendes has had no issues with his transition to MMA. The Francisco Mansur disciple has finished each of his first four opponents and last fought at Legacy 38 in February, when he took out Evan Martinez with second-round elbows at the Allen Event Center in Allen, Texas. Mendes, 32, will be back in the regional spotlight against Williams, a 27-year-old who finds himself on a three-fight losing streak.

One of the sport’s top prospects returns from an eight-month layoff when Hawes makes his Titan Fighting Championship debut against Rota. A decorated amateur wrestler, Hawes won a national championship at Iowa Central Community College, the same school at which Jon Jones and Cain Velasquez go their starts. The 26-year-old middleweight has taken a liking to MMA, compiling a 3-0 record with three finishes. Hawes, who trains with the Blackzilians, has not competed since he submitted Brandon Collins with a first-round armbar in October. Rota is in the midst of a six-fight winning streak. 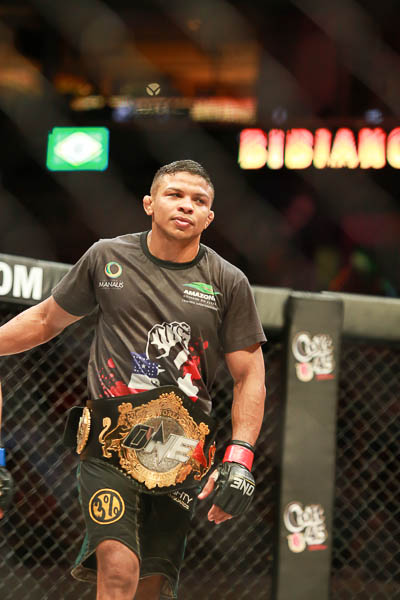 Bantamweight gold will be up for grabs when Fernandes defends his One Championship title. The 35-year-old Brazilian has long been viewed as one of the premier 135-pound fighters operating outside the UFC and has parlayed his skills into a career-best nine-fight winning streak that stretches back to 2011. Fernandes was also a two-division champion in the Japan-based Dream organization. A former Cage Warriors Fighting Championship titleholder, Finland’s Tauru has won 10 straight bouts, the last seven of them by submission.

Watanabe’s Deep welterweight strap will be on the line against the well-traveled Nakamura. A 30-year-old Alliance-Square rep, Watanabe last appeared at Deep 70 Impact on Dec. 20, when he wiped out Yuya Shirai with first-round punches at Differ Ariake in Tokyo. He has finished six opponents during his current seven-fight winning streak. Nakamura, 31, has competed in Shooto, Sengoku, Dream and the UFC. The 38-fight veteran has posted three straight wins since his decision loss to Frank Camacho under the Pacific Xtreme Combat banner in February 2014, stopping Yoshiyuki Katahira, Yuki Okano and Keiichiro Yamamiya in succession.