Fasten your seatbelts and hang on for a unique ride through the world of professional mixed martial arts.

The monthly “10 Tussles” series takes fans around the globe in an effort to broaden their horizons, showcasing the fights that might not otherwise get much attention. For June, the spotlight settles on 10 bouts from 10 different countries.

South African promotion Extreme Fighting Championship Africa is the first organization to put the plateau continent on the MMA map. The Johannesburg-based fight league has already put on eight events in its 20-month existence and has drawn respectable crowds, some as large as 7,000. Headlining the EFCA’s ninth show will be its heavyweight champion, Wessels, who will make the first defense of his title. Challenging the “Chef” will be undefeated judoka Potts. The 33-year-old stopped fellow judo ace Baygon Obutobe in April to earn his shot at the gold.

The Almogavers were a class of soldiers from the Crown of Aragon in the 13th and 14th centuries. Today, their name is emblazoned on Spain’s lone internationally relevant MMA event. Its fifth show will feature arguably the country’s best fighter in Bellator Fighting Championships veteran Lloret. He will take on Switzerland’s Reiz. Even though the Augusto Frota student has just one MMA fight, he has won countless titles in karate, kickboxing and muay Thai. The Bosnia-born heavyweight is one violent human being.

Olympian MMA Championships, the promotion formerly known as Cage Gladiators, is the stomping ground for the Team Kaobon talent looking to make a name for itself. The main event for OMMAC 10 is a welterweight title eliminator for the crown currently held by submission specialist John Maguire. To earn another shot at Maguire, Murrie first has to make it past Iranian wrestler Arish. The Manchester-based grappler is dropping down from middleweight after having a 10-fight win streak snapped in April.

Although he has lost at few steps from his 2008-09 prime due to constant back problems, Poland’s Jocz remains a solid touchstone for every middleweight looking to make a name for himself in Europe. Enter former M-1 light heavyweight champion Vasilevsky. The 22-year-old had an impressive 2010, as he won all six of his fights, including a submission win over two-time UFC veteran Xavier Foupa-Pokam. It will be interesting to see how he performs outside of Russia. 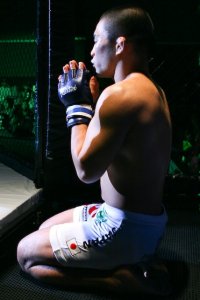 Super flyweight King of Pancrase Shimizu will make the third defense of his 125-pound crown against a familiar foe. The 27-year-old sambo fighter has already turned in a trilogy against Sunabe, with the series tied at 1-1-1. The fourth encounter with the Hideo Tokoro training partner is supposed to provide certainty about the superiority between the two. A key to victory for Shimizu will be to neutralize Sunabe’s whopping six-inch reach advantage.

Santos is arguably the top Brazilian middleweight still plying his trade in his home country. At 8-0, the only minor blemish on his record is his lack of stoppages. The 23-year-old has a chance to add three more wins to his ledger in a single night, as he enters the Bitetti Combat Cup 9 middleweight grand prix.

His quarter-final opponent is no stranger to tournament action. In 2009, Portugal-based Brazilian jiu-jitsu black belt Nobrega won the KSW middleweight tournament. With only one win in his last four fights, he will enter the clash with “Carioca” as the underdog.

Seven years ago, “The Hulk” Palelei seemed like the second coming of Mark Hunt -- a big Samoan knockout artist. A product of the Australian Shooto Circuit, the 33-year-old was given chances in Pride Fighting Championships and the UFC but never really managed to get that significant win. However, he remains ultra-popular in his homeland. Deep Megaton champion Kawaguchi is as close as it gets to a decent Japanese heavyweight. Although he was stopped by another Australian kickboxer, Peter Graham, in November, he has proven durable and moves relatively well for a big man.

For only the fourth time in its nine year history, revived UK promotion Cage Warriors Fighting Championship is putting on an event outside of the British Isles. Its foray into the Arabian Desert will mark its debut in the Middle East. Headlining an international card will be Iranian Swede Madadi and Matt Hughes training partner Matt Veach. “Mad Dog” Madadi was born 950 miles east of Amman in Tehran, Iran, and has already beaten two American fighters in Junie Allen Browning and Rich Clementi. However, the decision over Clementi was highly controversial.

After a forgettable 2010, reigning Dream welterweight champion Zaromskis kicks off his latest campaign with his Canadian debut against Mein. “Young Guns” has scored some prominent wins over Joe Riggs and Josh Burkman. Mein has his eyes on the UFC’s December stop in Canada. To get there, he needs to beat the Lithuanian “Whitemare” -- his toughest test to date.

Sandro, the sixth-ranked featherweight in the world, will make his Bellator and stateside debut in his Bellator Season 4 featherweight tournament quarter-final against countryman Da Silva. “Junior PQD” is currently riding a five-fight winning streak and is undefeated since dropping to featherweight. The Marcio Cromado student has experience with the grand prix format, as well, having competed in Fury Fighting Championship and Watch Out Combat show tournaments. Fighting the brutal knockout artist Sandro serves as a huge step up in competition for the 24-year-old.