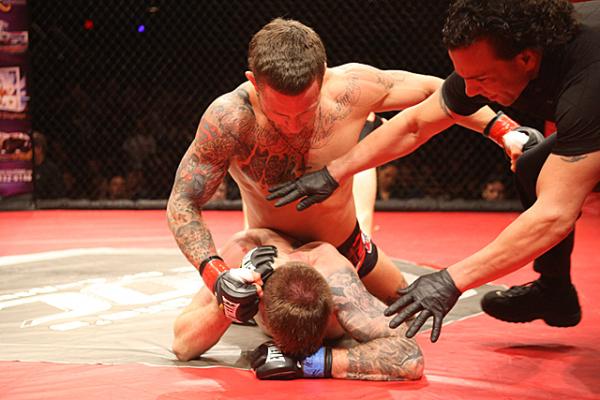 Gregor Gillespie seems to have all the ingredients.

Regarded as one of MMA’s top lightweight prospects, Gillespie will risk his undefeated record when he confronts journeyman George Sheppard at Ring of Combat 51 on June 5 at the Tropicana Casino in Atlantic City, N.J. “The Gift” has a wealth of tools upon which to draw, most notably his collegiate wrestling pedigree.

Gillespie was a four-time NCAA All-American wrestler at Edinboro University in Pennsylvania, where he won a national championship in 2007. The 27-year-old still ranks first on Edinboro’s all-time list in career wins (152) and winning percentage (.917), and he remains one of only two wrestlers -- Josh Koscheck is the other -- in school history to earn All-America honors four times. Gillespie has experienced no issues in his transition to mixed martial arts, as he has posted a perfect 4-0 mark, with four first-round finishes. He last competed at Ring of Combat 50 in January, when he disposed of Justin Stewart with first-round punches. Gillespie has thrown out his anchor at Long Island MMA, where he trains alongside “The Ultimate Fighter” Season 14 finalist Dennis Bermudez.

Sheppard represents Gillespie’s most seasoned opponent to date. The 26-year-old, 25-fight veteran has dropped five of his past eight bouts but has tested himself against a number of noteworthy competitors, including Charlie Brenneman and Jim Hettes.

The Gillespie-Sheppard clash is but one under-the-radar matchup worth monitoring during the month of June. Here are nine more:

Brown will welcome yet another highly touted prospect to the Ring of Combat promotion, when he defends his welterweight title against the unbeaten Vlad Popovskiy. A 23-year-old Moldovan, Popovskiy carries with him an unblemished 9-0 record. He sports 30-, 35-, 38-, 56- and 91-second finishes on his resume, having last appeared under the World Warriors Fighting Championship banner in June. There, he put away Vasiliy Fedorych with first-round punches. Brown, 24, has stopped all three of his opponents. The undefeated Jamaican captured the vacant Ring of Combat welterweight crown with a second-round technical knockout on Mike Winters in January.

Benjamin Smith will put his Resurrection Fighting Alliance welterweight crown on the line for the first time when he takes on “The Ultimate Fighter” Season 17 graduate Gilbert Smith in the RFA 26 headliner. The 35-year-old Xtreme Couture representative has rattled off six consecutive victories and captured the 170-pound title by dispatching Indalecio Tat Romero with third-round punches at RFA 24 in March. Gilbert Smith has not fought since dropping a unanimous decision to Chidi Njokuani some five months ago.

Vitruk’s stock took a hit in February, when he suffered his first pro defeat in submitting to a Max Coga rear-naked choke. Still, the 24-year-old Ukrainian remains an intriguing talent at 145 pounds. Vitruk will now look to right his ship and rebound against Morrison, a Sikjitsu export who owns an 8-2 record across his past 10 appearances. The 29-year-old “American Bulldog” last competed at M-1 Challenge 49 a year ago, when he tapped to a first-round armbar from Tural Ragimov.

Mineev draws a much-needed step up in competition in the form of Foupa-Pokam. The unbeaten 25-year-old Russian light heavyweight has taken care of all four of his opponents inside one round. Their combined record: 15-12. Mineev has already fought three times in 2015, scoring wins over Josip Perica, Mikhail Shein and Ivan Sedo. Foupa-Pokam, a well-traveled Frenchman with more than 50 pro bouts under his belt, finds himself in the midst of a resurgence, with victories in nine of his last 11 fights.

Carving out a nice niche for himself on the regional scene, O’Neil’s CES MMA welterweight title will hang in the balance when he faces Steele. A semifinalist on Season 13 of “The Ultimate Fighter,” the 29-year-old Falmouth, Mass., native has compiled a 7-2 record since being jettisoned by the UFC four years ago. O’Neil claimed CES MMA gold in October with a second-round submission on Ricardo Funch and then defended it with an 11-second knockout against Emmanuel Walo on Jan. 30. Steele, a Bellator alum, owns wins over Dan Hornbuckle, Ryan Thomas and Nate Moore.

Aliakbari enters the MMA world with two passengers: potential and controversy. A two-time world champion in Greco-Roman wrestling, the 27-year-old Iranian heavyweight was stripped of one of his gold medals, missed the 2012 Olympics and received a lifetime ban from the International Federation after he was flagged for suspected use of performance-enhancing drugs for a second time. Aliakbari has thus turned his attention to mixed martial arts, training out of an American Kickboxing Academy affiliate in Thailand. He will make his professional debut opposite Benjamin Sosoli at an Australian Fighting Championship event. Sosoli has finished each of his first two opponents with strikes.

Nearly five years have passed since Somdet appeared inside Shooto. A former 114-pound champion, the 40-year-old Thai will return to the venerable Japanese organization, as he takes aim at Kato and tries to rebound from his first loss since 2002. Somdet saw an 11-fight winning streak -- his run lasted almost 12 years -- grind to a halt in a split-decision setback against Crisanto Pitpitunge at a Pacific Xtreme Combat show in November. Kato, 31, has lost five of his last eight fights after starting his career 5-1-1.

Climbing the ladder at 135 pounds, the once-beaten Shevchenko runs into Damm inside the Legacy Fighting Championship organization. Based at the Tiger Muay Thai camp, the 27-year-old Peruvian has pieced together four straight wins since she suffered her only professional loss in a September 2010 encounter with Liz Carmouche. Shevchenko last fought at Legacy 39 in February, when she took a three-round unanimous decision from Jan Finney. Damm, meanwhile, has dropped back-to-back bouts to Marciea Allen and Elaine Albuquerque.

Torres, a former World Extreme Cagefighting champion, will meet fellow UFC castaway Chope in the semifinals of the Rebel Fighting Championship featherweight grand prix; the winner will face the survivor of the other semifinal between Kleber Koike and Michael Tobin. The 34-year-old Torres is 3-1 over his last four outings but saw his momentum stymied in a 46-second knockout loss to Desmond Green at a Titan Fighting Championship event on Halloween. Chope will enter the match on a five-fight winning streak, the last four of them by submission.
SHARE ON FACEBOOK SHARE ON TWITTER
Related Articles
Latest News
+ VIEW MORE