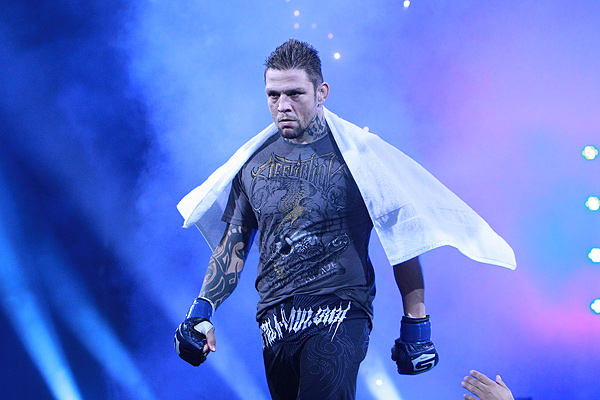 While the first two months of the year usually run a bit slow on the independent circuit, the mixed martial arts calendar will find another gear in March, with a least five non-Zuffa LLC events poised to draw 5,000 fans or more.

Sengoku has disappeared from the scene and Dream has fallen into a deep sleep, so the power balance in the Far East shifts towards the three islands of Singapore, Indonesia and Malaysia -- home of the fledgling One Fighting Championship promotion. It settles into a prominent position in our monthly “10 Tussles” series, as we take you around the globe in an effort to broaden your MMA horizons, showcasing the best fights and fighters that might not get much attention otherwise.

As always, the list does not focus on the well-promoted main event bouts from major organizations you already know to watch but rather on fights from all over the planet that are worth seeing. The UFC, Strikeforce and Bellator Fighting Championships shows are excluded by design.

With Sobral’s wins over Kiyoshi Tamura, Tsuyoshi Kosaka and Mauricio “Shogun” Rua and Manhoef’s victories against Kazushi Sakuraba, Kazuo Misaki and Mark Hunt, it is safe to say both men have built successful names in Japan. It will be interesting to see how that translates to the “New Japan,” Singapore, which appears to be the latest hotbed for MMA in Asia. On the sporting front, neither man has fought in MMA in more than a year. As is the case with every Manhoef fight, if he can keep it standing, he becomes a heavy favorite.

With its stacked cards, Tachi Palace Fights has become a favorite stop for the lower-weight aficionados. TPF matchmaker Richard Goodman has put together about as legitimate a featherweight scrap as can be made outside of the UFC, pairing “The Ultimate Fighter 14” alum Miller with Bellator veteran Karakhanyan. The Armenian made short work of Isaac DeJesus in December. Miller was upset by Steven Siler on “The Ultimate Fighter” and wants a victory to redeem himself.

Arguably the best United Kingdom-based fighter not currently in the UFC, Southampton’s Watson has alternated between battling injury woes and dispatching hand-picked opponents inside the British Association of Mixed Martial Arts cage. “Kong” was last seen head kicking former EliteXC middleweight champion Murilo “Ninja” Rua into retirement in May. Ten months later, he will face BAMMA’s undefeated British champion Marshman. The 22-year-old Welshman may not possess Watson’s experience, but he has been quite active lately, fighting eight times within the last 24 months.

Although he dropped the M-1 Global welterweight title in spectacular fashion with a last-minute submission loss to Yasubey Enomoto, stocky sambo specialist Zavurov remains one of the top 170-pound fighters in Europe. Another intriguing Russian prospect, “Bad Boy” Yakovlev, will challenge the former champion. Yakovlev possesses one of the most entertaining entrances in M-1 -- he is often accompanied by his own rapper -- and also wields well-rounded skills with striking and submissions. Zavorov’s heavy top game seems certain to test the guard of the St. Petersburg fighter. “You can’t teach an old dog new tricks.” That saying certainly does not apply to Dutch kickboxer Yvel, who made the move from heavyweight to 205 pounds 14 years into his professional career. After punching overmatched Damian Dantibo into submission in his light heavyweight debut, the “Hurricane” ups the ante by signing to fight former UFC knockout artist Alexander. The 39-year-old Nebraskan successfully revived his career with knockouts of Rameau Thierry Sokoudjou and Razak Al-Hassan and remains a dangerous one-punch striker.

Former UFC middleweight Reljic moves up two weight classes to take on Spain’s Lloret. Reljic quietly bounced back from a trio of defeats inside the Octagon with a must-win over Serbian debutant Goran Scepanovic in October. Lloret was not as lucky, as he was submitted by American Bobby Brents in his last outing for the Cage Warriors Fighting Championship. It will be interesting to see if Reljic, a versatile striker with a solid ground game, can overcome a possible 20-pound weight deficit.

One of the cradles of MMA, Brazil features great domestic promotions. Many of today’s champions have passed through those shows, from Jungle Fight and Bitetti Combat to Fury Fighting Championship and Mecca. The current top dog where big-name fighters are concerned appears to be Amazon Forest Combat. Following up its eyebrow-raising debut in September, AFC has put together another stellar card, including a welterweight scrap between Pride Fighting Championships veteran Acacio and “The Ultimate Fighter” alum Burkman.

In the shadow of Strikeforce’s blockbuster women’s bout between Miesha Tate and Ronda Rousey, MEZ Sports has compiled a formidable female battle of its own between top 115-pounders Esparza and Magana. Team Oyama’s Esparza enjoys home-field advantage, as she trains just a 40-minute drive from the event location. The 24-year-old submission specialist is coming off a strong win over Felice Herrig in December. Magana will bring with here a considerable size and reach advantage, along with the fact that she has faced much tougher competition.

In this month’s most notable heavyweight battle, Germany’s Kraniotakes faces off against Strikeforce and Bellator veteran Hayes just three weeks after his win over Ukraine’s Dmitry Poberezhets. Hayes has managed to free himself from his Bellator obligations after staying on the shelf for more than five months; here, he is rewarded with a crack at the vacant Cage Warriors heavyweight strap. Both of them like to stand and trade, as well as fight on the ground, so it figures to boil down to which man is better prepared physically for this five-round title bout.

Bouncing back and forth between Shooto and Pancrase -- where he holds the flyweight crown -- the world-ranked Shimizu remains one of Japan’s Top 5 “little men.” Always looking to stay active, the sambo artist will face Ochi at Shooto’s March 10 event. Oachi is a violent flyweight with power in both of his hands, vicious ground-and-pound and extreme upper-body strength. Shimizu has not been in top form in his last two fights, so the possibility of an upset definitely exists here.