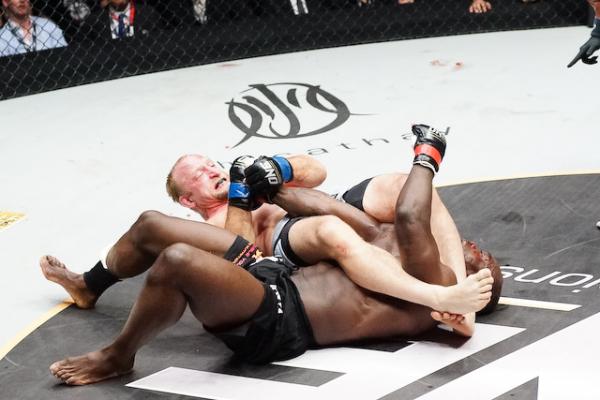 While Brock Larson and Nobutatsu Suzuki battle it out for the vacant One Fighting Championship welterweight crown, a certain “Funky” free agent acquisition watches and waits.

Larson and Suzuki will collide with promotional gold on the line in the One FC 14 “War of Nations” main event on March 14 at Stadium Negara in Kuala Lumpur, Malaysia. The winner will defend the title later this year against the unbeaten and world-ranked Ben Askren, who agreed to terms with One FC in December following a dominant run as Bellator champion.

A UFC and World Extreme Cagefighting veteran, Larson will enter the cage on a four-fight winning streak. The 36-year-old Minnesotan last appeared at One FC 8 in April, when he captured a unanimous decision over Dutch knockout artist Melvin Manhoef at Singapore Indoor Stadium in Kallang, Singapore. A potent and punishing ground fighter, Larson has secured 26 of his 37 career victories by submission. His list of victims includes former International Fight League champion Ryan McGivern, Syndicate MMA’s Mike Pyle and “The Ultimate Fighter” Season 9 finalist DaMarques Johnson.

Suzuki has recorded seven wins in his past eight outings. A training partner and karate coach to onetime Pride Fighting Championships lightweight titleholder Takanori Gomi, the 36-year-old was originally booked to compete for the One FC title in November before losing two opponents to injury. Suzuki suffered his only professional defeat to Keita Nakamura in December 2012 but rebounded to stop Phil Baroni on first-round punches at One FC 9 five months later. He has delivered all 10 of his victories by knockout or technical knockout, six of them inside one round.

The Larson-Suzuki title clash is but one under-the-radar matchup worth monitoring during the month of March. Here are nine more:

Njokuani seems primed for a move to the big stage. The 25-year-old younger brother of UFC and WEC veteran Anthony Njokuani has won five of his past six bouts. Njokuani last fought in August, when he put away LeVon Maynard with first-round punches at a Shinzo Fight Sport event in Guatemala. He has gone the distance only once in 14 career bouts. Heatherly will enter his Resurrection Fighting Alliance debut on a modest two-fight winning streak. He submitted Dakota Cochrane with a first-round armbar under the Warriors for Heroes banner in October. 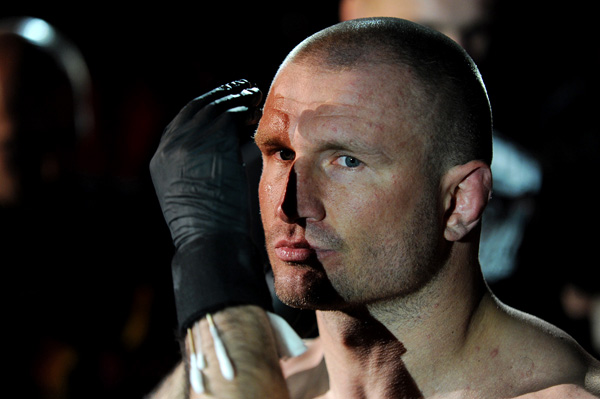 Photo: Piotr Pedziszewski/Sherdog.com
Grabowski owns a 19-1 record.
Long regarded as one of Europe’s top heavyweights, Grabowski captured the M-1 Global title with an arm-triangle choke submission against Kenny Garner a little more than three months ago and has rattled off six consecutive victories since suffering his lone professional defeat to Cole Konrad at Bellator 29 in September 2009. A potent finisher, the 33-year-old Pole has delivered 16 of his 19 wins by knockout, technical knockout or submission, 10 of them inside one round. The unbeaten Tybura, 28, took out Latvian strongman Konstantin Gluhov with a rear-naked choke in October.

A former Shooto champion who was once hailed as the world’s premier flyweight, Kojima made his One Fighting Championship debut at One FC 7 in February 2013, when he submitted Rey Docyogen with a second-round guillotine choke. The 35-year-old has not fought since. Phuket Top Team’s Leone, the younger brother of Strikeforce and WEC alum Anthony Leone, has won six times in his last seven appearances, a submission loss to current UFC bantamweight Kyung Ho Kang the lone hiccup.

Brookins won Season 12 of “The Ultimate Fighter,” compiled a 2-3 record in the UFC and then proceeded to disappear from the MMA scene after moving to India. In his first appearance since submitting to a Dustin Poirier brabo choke at “The Ultimate Fighter 16” Finale in December 2012, the 28-year-old Gracie Barra Orlando representative will compete under the Legacy Fighting Championship banner. Fuller will enter the cage on the heels of back-to-back losses to Micah Stockton and Ryan Benoit.

Conceicao has put together a 3-0-1 mark since dropping a split decision to Hugo Viana at UFC 147 in June 2012. The 27-year-old Brazilian jiu-jitsu black belt failed to make weight for the bout and was not given a second opportunity inside the Octagon. A graduate of “The Ultimate Fighter: Brazil” Season 1, Conceicao last fought in June, when he battled Rivaldo Junior to a split draw at Shooto Brazil 40. Tenorio, 26, has lost only once -- he was victimized by a Lucas Martins head kick in 2012 -- in the last three years.

Sylvia has known better days. The two-time UFC heavyweight champion finds himself on the second three-fight losing streak of his career as he approaches his 38th birthday. Once a mainstay on MMA’s center stage, Sylvia has retreated to the regional circuit in recent years. “The Maine-iac” last competed in October, when he wound up on the wrong side of a unanimous decision against Ruslan Magomedov at a Fight Nights show in Russia. The 30-year-old Bedorf seems to be trending upward, with victories in each of his past four fights.

A former two-division Deep champion, Imanari remains one of MMA’s most feared grapplers. The well-traveled 38-year-old has delivered 17 of his 27 career victories by submission, including wins over onetime World Extreme Cagefighting champion Mike Thomas Brown and former King of Pancrase Yoshiro Maeda. However, Imanari has remained on the sidelines since defeating Kenichi Ito by unanimous decision at Deep Impact 61 more than a year ago. Motoya, 24, has won six of his last seven fights.

Churilov and Dalby will duke it out for the vacant Cage Warriors Fighting Championship welterweight crown. A 28-year-old Ukrainian, Churilov has finished his last five opponents, four of them in the first round. Still, the Combat Dobro representative has not competed under the Cage Warriors banner since February 2012. Dalby owns a perfect record through 11 professional outings. The 29-year-old Dane last appeared at a European MMA event in September, when he stopped Morten Djursaa on first-round punches in his native Denmark.

Still viewed by many as the world’s premier strawweight, Somdet has not lost since he dropped a unanimous decision to Darren Uyenoyama in June 2002. The 39-year-old former Shooto 115-pound champion ran his current winning streak to 11 fights in October, when he outpointed Kenichi Sawada at a Grabaka event in Tokyo. Lakay MMA’s Sangcha’an has finished each of his first four opponents. He made his Pacific Xtreme Combat debut in September, when he submitted Ernesto Montilla with a second-round rear-naked choke.