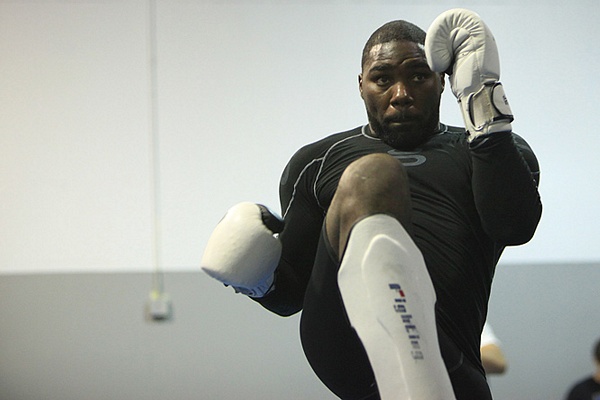 Looking back at recent weeks and months, one can truly say mixed martial arts has become a global phenomenon. Major credit is due the Ultimate Fighting Championship, which has done a fantastic job of opening new markets in Europe, Australia, the Middle East and South America, but domestic promotions continue to increase the quality of their product, as well. In 2012, one can find quality MMA from Bahrain and Sweden to Canada and Russia, provided one knows where to look.

In this monthly series, we take fans around the globe in an effort to broaden their MMA horizons, showcasing the best fights and fighters that might not get much attention otherwise. This month, we feature the return of the talented but enigmatic Anthony Johnson, who was shown the door by the UFC after he failed to make weight for his ill-fated showdown with Vitor Belfort in January.

As always, the list does not focus on the well-promoted main event bouts from major organizations you already know to watch, but rather on fights from all over the planet that are worth seeing. The UFC, Strikeforce and Bellator Fighting Championships cards are excluded by design.

Three strikes and you are out. After missing weight for his fights against Rich Clementi and Yoshiyuki Yoshida, the whopping 12 pounds by which “Rumble” Johnson exceeded the middleweight limit for his UFC 142 matchup with Belfort were the final straw. The incident made UFC President Dana White furious and sent Johnson out of the UFC despite five of his six wins inside the promotion coming by knockout. He will now try to bounce back against another Zuffa LLC outcast in Branch. The Renzo Gracie black belt is 2-0 after being given the boot in March 2011 and wields a huge reach for a middleweight.

Accomplished wrestler Coy used his strong takedowns and top control to shut down the game of highly touted prospect Dhiego Lima in January. Now, the 33-year-old American Top Team fighter gets to face another promising up-and-comer in McGillivray. “The Ultimate Fighter” Season 13 alum won his return fight with the MFC in January, as he submitted the previously undefeated Diego Bautista. The young Canadian is going into the fight against Coy as a heavy underdog. Can he pull off the upset?

The Cage Warriors Fighting Championship 2012 World Tour continues. Originally, the United Kingdom promotion’s sixth stop this year was slated for desert country Qatar. Instead, it has now opted for the island state of Bahrain. In the main event of CWFC’s fourth Middle East show of 2012, French champion Grimaud will defend his welterweight title against UFC and Strikeforce veteran Taylor. “JT Money” had a mixed 2011, with a submission win over Denis Kang and two submission losses to Hector Lombard and Mamed Khalidov. Grimaud has won five straight. Dave Mandel
Garner is a road warrior.
Russian Malikov, 28, rose to fame overnight when he knocked out former Top 10-ranked heavyweight Aleksander Emelianenko in just 23 seconds in November. In the absence of still-injured champion Guram Gugenishvili, the teammate of M-1 Global welterweight champion Rashid Magomedov and middleweight champion Magomed Sultanakhmedov will now fight former title contender Garner for the promotion’s interim heavyweight strap. The American put together a strong 2011 campaign, capped off with a fifth-round submission of Maxim Grishin.

In the bona fide bantamweight bout of the month, Shooto pits its 132-pound champion, Okazaki, against its Pacific Rim champion and number one challenger, Ogikubo. Seasoned veteran Okazaki won the strap in April 2011 by knocking out previous titleholder Shuichiro Katsumura. Ogikubo, seven years the champion’s junior, punched his ticket for the title fight with a hard-fought decision victory over eccentric submission specialist Tetsu Suzuki.
The winner will likely put himself in position for even bigger tasks stateside.

These two serious contenders in the Scandinavian fight scene were criminally overlooked for UFC berths last month and will duke it out in the return of The Zone FC. Gothenburg’s most prominent promotion took a one-year hiatus and will come back with a stellar card. Well-rounded Troeng was last seen finishing a pair of Czechs late last year, while master grappler Nilsson made an impressive Cage Warriors debut in February, submitting “The Ultimate Fighter” Season 6 finalist Tom Speer before sweeping away Dream veteran Alavutdin Gadjiev in just 24 seconds a month later.

Old school versus new school is the theme of Pure MMA’s sophomore event, as nine-time UFC veteran Thomas fights red-hot California prospect Bollinger in the headliner. “Dinyero” has been sidelined for a whopping 28 months due to various cancelled fights, smaller and more serious injuries and a car accident. Bollinger has been active, winning six out of seven fights in that same period, including his first high-profile win over “The Ultimate Fighter” alum Cameron Dollar. Can Bollinger’s wrestling shut down Thomas’s jiu-jitsu game?

With “freak fights” being as popular as ever in many parts of the world, Indian promotion SFL has taken the plunge and booked former World Wrestling Entertainment star Lashley to fight Pride Fighting Championships veteran James Thompson. After an unprecedented losing streak of 12 of 15 fights from 2006-10, “The Colossus” has rebounded with a highly controversial pair of fights against Polish strongman Mariusz Pudzianowski and a submission of Bob Sapp in SFL’s inaugural show. Lashley had trouble securing fights in 2011 but ultimately won the Shark Fights heavyweight title in November.

In this month’s featured female fight, reigning Jewels 115-pound champion Hamasaki makes the second defense of her title against 25-fight veteran Tsuji. The challenger was the longtime Smackgirl lightweight champion and the Valkyrie featherweight champion -- until she dropped the belt to Mei Yamaguchi in a rare submission defeat. Tsuji has been in the game for more than 10 years and possesses far more experience Hamasaki, who has only been fighting professionally since 2009.

Stockholm’s Globe Arena is becoming a place of pilgrimage for martial arts. Only six weeks after the UFC hosted its Scandinavian debut at the 16,000-seat orb, Glory teams up with Swedish promoter Rumble of the Kings to stage the first round of a 155-pound muay Thai tournament. They also drop in a little gem for the MMA fans, as former Pride star Sergei Kharitonov battles King of the Cage heavyweight champion Lopez. “Kryptonite” has been hunting down top-ranked Russians as of late, submitting Dmitry Zabolotny and Shamil Abdurahimov last year.