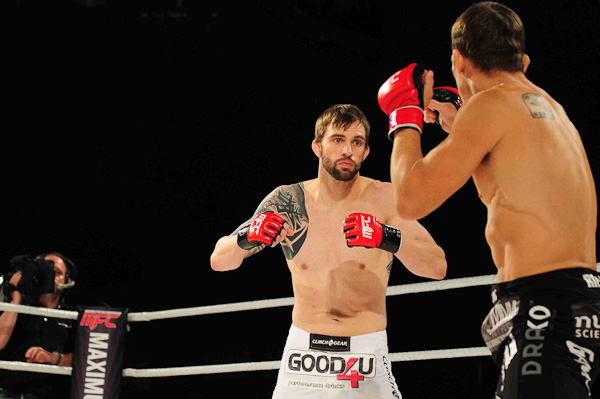 Brian Cobb has won 19 professional fights, 12 of them by submission. | Photo: Greg Hamilton/Sherdog.com


Mixed martial arts has established itself on network television in 2012, as the Ultimate Fighting Championship spread its content across multiple Fox platforms. At the same time, Strikeforce struggled to build on perhaps the strongest stretch of its existence; Bellator Fighting Championships underwent a transition, as it prepares for a move from MTV 2 to Spike TV in 2013; and, on the regional circuits, fans have been treated to a number of spectacular fights, as new stars continue to rise around the globe.

Our monthly “Tussles” feature -- which takes readers around the globe in an effort to broaden their MMA horizons and showcase the best fights and fighters that might not draw much attention otherwise -- turns its attention to the lower weight classes. Las Vegas-based promotions World Series of Fighting and Resurrection Fighting Alliance feature a pair of highly intriguing lightweight clashes, while venerable Japanese organization Pancrase puts its flyweight crown up for grabs. Lastly, two featherweight studs collide in the Philippines within the scope of an interesting country-versus-country storyline.

As always, the list does not focus on the well-promoted main event bouts from major organizations you already know to watch but rather on fights from all over the planet that are worth seeing. The UFC, Strikeforce and Bellator cards are excluded by design.

Arguably the top Brazilian and American lightweights not under Zuffa contract will square off as part of the World Series of Fighting 1 prelims streaming live to Sherdog.com. “Jungle Boy” Torres has been on an absolute tear ever since he received what many felt was a premature release from the UFC after two close decision losses. Cobb went 4-0 in 2010-11, only to suffer a setback at the hands of Antonio McKee in January. The winner of this fight could find himself back on the sport’s brightest stage in 2013.

For the first time since winning the title in December, veteran redhead Sunabe will defend his 120-pound strap. Challenging the 33-year-old all-rounder will be Paraestra knockout artist Utsugi. The 27-year-old Ibaraki native literally punched his ticket to the No. 1 contender’s slot with back-to-back knockouts over Yoshihiro Matsunaga and Takuya Eizumi. Even though Utsugi has a couple of good wins on his resume, the title fight against Sunabe represents a huge step up in competition for him.

Three years ago, a then 23-year-old Faria fought the already established international MMA veteran Damm in only her fourth professional fight. After an even first round, she was mounted and grounded-and-pounded until her corner threw in the towel. Now, the two ladies get to dance again on Warriors Fighting Championship’s inaugural event. Faria has developed into a serious flyweight contender and is riding a four-fight winning streak, while Damm is coming off a tough knockout at the hands of Munah Holland in July.

Due to a recent stretch of bad results, five-time UFC “Fight of the Night” winner Griffin and “The Ultimate Fighter” Season 8 winner Escudero find themselves in the primes of their careers but on the outside of the Octagon looking in. Both men made virtue out of necessity and are now fighting each other in the headliner of Resurrection Fighting Alliance’s latest event.

Griffin competed at featherweight in his past two bouts but will return to 155 pounds for the scrap with Escudero, who has never been knocked out in his 23-fight career.

Although he was not one of the headliners, rising Canadian star Mein was one of the fighters affected by Strikeforce’s Nov. 3 cancellation. One man’s sorrow is another man’s joy, as his previous employer, the Score Fighting Series, gladly welcomed the “Young Gun” back and put him in the main event slot against grizzled veteran Petz. “The Meat Cleaver” has already proven to be a stumbling block for many other promising talents throughout his career. In 2006, he won a five-round decision over Dan Hardy.

The M-1 Global welterweight title picture has been a four-way dance the last couple of years. The current champion, Magomedov, came out on top of a hard-fought five-rounder against Switzerland’s Yasubey Enomoto in March. The Dagestani knockout artist also holds a split decision win over previous titleholder Shamil Zavurov. Now, he gets a fresh foe in Yakovlev. The versatile St. Petersburg native fought to a draw with Zavurov in March and was awarded the title shot in his hometown.

Utah may not seem like a hotbed for mixed martial arts, but the Showdown Fights promotion is certainly raising the flag for the Beehive State. In its latest installment, the organization’s vacant lightweight title is up for grabs. One of the challengers is Salt Lake City’s own Castillo, who has gone 3-0 under the Showdown Fights banner. Across the cage from him will be Team Alpha Male’s Buchholz. The 29-year-old has won four of his last five fights and is coming off an assistant coaching stint on Season 15 of “The Ultimate Fighter.”

Leading Filipino promotion Pacific Xtreme Combat is becoming more and more of a player due to its good eye for up-and-coming talent and rock-solid matchmaking. This month, PXC will delight the fans in the Philippines with a battle between Hawaii and Japan. Representing Japan, ironically, will be Shooto and Pancrase veteran Delumeau, who originally hails from Honolulu but currently resides in Tokyo. He will square off against undefeated submission specialist Kimura, who, despite his name, prefers to win fights with various chokes.

Taylor, a finalist on Season 7 of “The Ultimate Fighter,” has become an MMA globetrotter. Since appearing on the UFC reality series, the 28-year-old wrestler has competed in Mexico, Japan, Australia, Panama, Poland and Bahrain. “JT Money” has especially fallen for the land Down Under and will appear there for the fourth time when he faces Australian standout “Steamroller” Kennedy for the K-Oz Entertainment middleweight title. Kennedy has enjoyed a stellar 2012 campaign, winning four of his five fights, with three finishes.

Some fighters remain underrated for their entire career. Case in point: Lithuania’s Taurosevicius. After rising to fame during his run in the International Fight League, “Taurus” earned a WEC contract when the IFL went out of business. Despite going 2-1, his services were deemed expendable. A regular attraction for Ring of Combat since 2011, the 35-year-old Taurosevicius will make his fourth appearance for the New Jersey promotion when he squares off with Bellator veteran Caraballo. “The Tank” will ride a six-fight winning streak into this matchup.