As fall sets up shop, days get shorter and outdoor temperatures begin to drop. Quite a different environment exists in mixed martial arts, where autumn and winter have traditionally been the busiest and hottest seasons. This year looks no different, as there will be plenty of promising bouts around the globe.

Fasten your seatbelts and hang on, as Sherdog.com takes you around the world for 10 October tussles mixed martial arts fans must not miss.

As always, this list does not necessarily focus on the major bouts you already know to watch, but rather on fights from all over the planet that are worth seeing.

In his final domestic test before he takes on Jason Wood in an Xtreme Fighting Championships featherweight title eliminator, rising star Omer will step into the cage with seasoned veteran Buckler. The bout between arguably Germany’s two best 145-pound fighters has been more than a year in the making, and fledgling promotion Kafig Kiel jumped at the chance of having it as one of its featured matches. MMA events in the North of Germany always have a special raucous charm, and this scrap seems destined to make the North Sea boil.

Recently championed as one of the top 10 prospects in Europe, young Liverpool native Sass will try to capture the British lightweight crown in the newly established promotion Olympian MMA Championships. Defending champion Sinclair stands in his way. Sinclair -- along with his brother, Mick -- has emerged as one of the most promising up-and-comers in the U.K. and turned more than a few heads when he knocked out Brazilian jiu-jitsu black belt Alexandre Izidro in June.

Originally scheduled to fight in individual bouts at an Affliction mega event that never saw the light of day, Taurosevicius and Vazquez will now butt heads on the undercard at the next WEC show. “Showtime” Vazquez -- who has become as well known for his pink pants as he has for his slick submission skills -- fought in the UFC’s sister promotion in August and dropped a close decision to L.C. Davis. Taurosevicius has not fought since May 2008, when the Lithuanian lost a unanimous decision to Ryan Schultz.

Sengoku and Deep veteran Monteiro will try to encourage the powers that be with the major Japanese promotions to bring him back into the fold. He has only fought once -- a first-round submission victory against fellow Deep veteran Yoshitomo Watanabe -- since a highly controversial defeat to Nick Thompson during Sengoku’s inaugural event. He will battle Bezerra for the Real Fight middleweight championship. Although he sports a 1-3 mark in his last four bouts, Bezerra holds a recent win against Fury FC middleweight titleholder Leandro Silva.

Thompson and his camp have cried for a top domestic adversary ever since “The Ox” went on a six-fight tear that saw him finish all of his opponents inside the first round. After nearly a full year of waiting, his call has been answered, as UCUK heavyweight champion Grove will defend his coveted strap against an opponent 14 years his junior. The battle for the belt will serve as a true David versus Goliath duel, as the 6-foot-6 Grove has to cut weight to make the 265-pound weight limit; Thompson could realistically fight at light heavyweight. 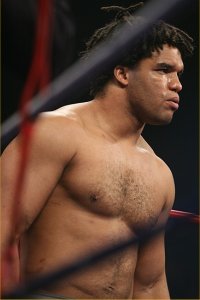 In a battle of two fighters who were considered among the very best in their division 10 years ago, Newton will take on “Mr. International.” While the jury remains out on Newton after he ended an abysmal 1-6 run with a first-round technical knockout in March, Carter has proven durable and extremely tough to finish in each of his 74 recorded career bouts. Can the 37-year-old American wrestle the W-1 welterweight belt from the 33-year-old Newton in a showdown between two of MMA’s most beloved veterans?

Martijn de Jong disciple Bahadurzada ducks no one. In his next test, he will take on Jocz, an ultra-tough Pole, at Golden Glory’s 10-year anniversary gala at Amsterdam’s Passenger Terminal. There were solid rumors that Jocz, who will carry a 10-fight winning streak into the showdown with the “Afghan Killa,” signed with Sengoku last October, and one has to wonder what he has to do to finally earn his shot in Japan. Beating Bahadurzada would be a good start.

Vale Tudo Japan brings back fond memories of Rickson Gracie and legendary battles like Frank Shamrock vs. Enson Inoue. Former Shooto lightweight champion “Pequeno” Nogueira already has a piece of that history. Considered one of the top pound-for-pound fighters in his prime, the Brazilian Luta Livre ace was plagued by injuries in recent years. Against current champion Inoue, the 31-year-old legend will put his legacy on the line after disastrous runs in the now defunct K-1 Hero’s promotion and World Extreme Cagefighting.

Not that they have ever been démodé, but Brazilian fighters are definitely on the rise again in the UFC. At least one Brazilian has participated in the main event or co-main event on the last 12 UFC pay-per-views. It should not surprise anyone that two fighters from the Sugarloaf Mountain would eventually square off in a marquee matchup. Can former divisional standout Rua complete his impressive comeback from two severe knee injuries and solve the enigmatic Machida?

There have been MMA trilogies for which the world did not ask, but there are cases in which a rubber match becomes an absolute must in order to settle a score. The Hansen-Aoki rivalry has become such a case. Everybody’s favorite spandex-wearing grappler embarrassed the Norwegian metal-head with a first-round gogoplata in their first meeting and got ground-and-pounded for a technical knockout in the rematch. Purists’ mouths are watering at the thought of Hansen-Aoki III.