As 2011, heads into its home stretch, fighters are trying to position themselves for a shot at the major leagues, and the Joe Silvas, Sean Shelbys, Sam Caplans and Keiichi Sasaharas of the MMA world are paying more attention than ever. Which fighters are taking on legitimate competition and which ones are simply padding their records?

In our monthly “10 Tussles” series, we take you around the globe in an effort to broaden your MMA horizon, showcasing the best fights that might not get much attention otherwise. This month, we have ten bouts from eight different countries on four different continents for you. So fasten your seatbelts and hang on for a unique ride throughout world MMA.

The United Kingdom’s longest-running promotion, Cage Warriors, is slowly but surely living up to its 2005-06 heyday, thanks to the hard work of new director Graham Boylan and encyclopedic matchmaker Ian Dean. In Cage Warriors’ seventh show this year -- its fourth in London -- the promoters have lined up their undefeated young lightweight ace Duffy against Swiss-Italian submission specialist Musardo. Ireland’s Duffy was a cast member on Season 12 of “The Ultimate Fighter 12” and has gone 4-0 since leaving the show. Musardo has trained at Team Nogueira for his shot at the vacant title.

Among the many traits that make MMA such an exciting sport is the fact that an almost 30-fight veteran like Pang can go into his first defense of the LFC lightweight title as an underdog against somebody with less than a third of his actual in-ring experience. An announcer’s worst nightmare, Narantungalag has recovered from a rough start into his MMA career; it saw him go 0-2, including a highlight-reel knockout at the hands of Norifumi “Kid” Yamamoto. He scored a pair of major upsets over Sengoku aces Akihiro Gono and Kazunori Yokota in 2010. Let us see what kind of form the 35-year-old is in after a 10-month layoff.

In the prime of his career and during his run in Pride Fighting Championships, Fedor Emelianenko’s estranged brother, Aleksander, would have likely knocked out an adversary the caliber of Dabrowski in the first round. However, this is not 2006, and Emelianenko is not nearly in that kind of shape. That makes a tough, durable and well-rounded opponent like “Uszol” a very dangerous foe. Question marks for promoter Strefa Walk will revolve around the condition in which Emelianenko shows up and how many tickets can be sold for the event. A week later, Warsaw plays host to the MMA Attack mega card.

After having to cancel his Aug. 20 clash with jiu-jitsu champion Sergio Moraes due to injury, the powerful Trator will return with a double pack of fights in October. First, he will warm up with a bout against Holland-based Italian Shooto veteran Paolo Milano at Ultimate Takedown 3 in Brussels, Belgium on Oct. 8. Then, he will take on busy Pride veteran Daniel Acacio at Kumite MMA’s inaugural show in Porto Alegre, Brazil. Despite his muay Thai background, Acacio has not been submitted by a fellow countryman since his heel hook loss to Rousimar Palhares in December 2007.

Whenever names are thrown around as most likely additions to the UFC’s roster ahead of its upcoming Scandinavian expansion, Helsinki’s Kuivanen may be mentioned most. The 27-year-old submission specialist is currently riding an eight-fight winning streak, with solid wins over Erikas Petraitis, Tim Radcliffe and Ivan Buchinger. Trying to prevent the Finn from extending that streak is Black House veteran Meller. “Minu” has been in there with some of the best lightweights in Brazil and recently had a six-fight winning streak of his own snapped. 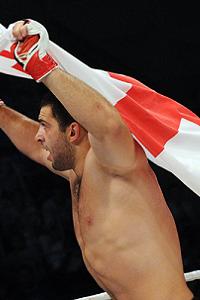 At 37 years old and still going strong, Somdet remains perhaps MMA’s most dangerous strawweight fighter. Even though the Thai assault rifle had to vacate his Shooto 114-pound title in April due to a partially torn left biceps, it is expected that he will get a crack at de facto interim champion Junji Ikoma this winter. Standing between him and reclaiming his gold is a fight against flyweight Uozumi at the Grabaka gym’s inaugural event. Contrary to the customs of both fighters, this event will, as the name suggests, be fought inside the cage.

The time has come for Gugenishvili’s United States debut. The big Georgian heavyweight was due to fight Pat Bennett on July 8 but had to cancel the fight with an arm injury suffered in training.

Now that the 25-year-old sambo specialist is 100 percent healthy, he will rematch American Top Team’s Kenny Garner. Garner beat Bennett for a second shot at M-1’s heavyweight champion. It will be crucial for “Deuce” to keep the fight upright again if he wants to avoid the same fate he suffered in their first clash almost exactly a year ago.

After he burst on the scene with two jaw-dropping knockouts against Antonio Rogerio Nogueira and Ricardo Arona, it appeared as if Sokoudjou was destined to become the first African breakout star in the young history of the sport. Five years into his tenure and the “African Assassin” has settled into being a solid player on the free agent circuit, even though he still hovers around the .500 mark. Jimmo, perhaps Canada’s top light heavyweight prospect, needs this final victory -- it would be his 16th in a row -- to finally punch his ticket to the UFC. However, Sokoudjou spoiled similar hopes for Jan Blachowicz earlier this year.

Perhaps a little overshadowed by the bigger names of Katsunori Kikuno, Ryo Chonan and Kazunori Yokota, this gem of an evenly matched bantamweight fight stands on its own. While both men have had their ups and downs, there is no denying their quality, which easily ranks them among the Top 5 Japanese 135-pounders. This will be an intriguing chess match between former King of Pancrase Maeda’s enormous punching power -- it has yielded him 14 of his 28 career wins -- and Nakamura’s iron top control on the mat, which has stifled 12 of his 17 career opponents.

The major welterweight clash outside of the UFC has finally materialized, as Bellator Fighting Championships Season 4 welterweight tournament winner Hieron gets his shot at reigning champion Askren’s title. Both fighters have been away from the cage for half a year. Askren was last seen retiring Nick Thompson in April, while Hieron clinched the tournament victory with a close decision over Rick Hawn. Even though Askren has worked diligently on his striking with former world kickboxing champion Duke Roufus, the sticking point will be if Hieron, himself a Div. I wrestler, will be able to stop the Olympians takedowns.