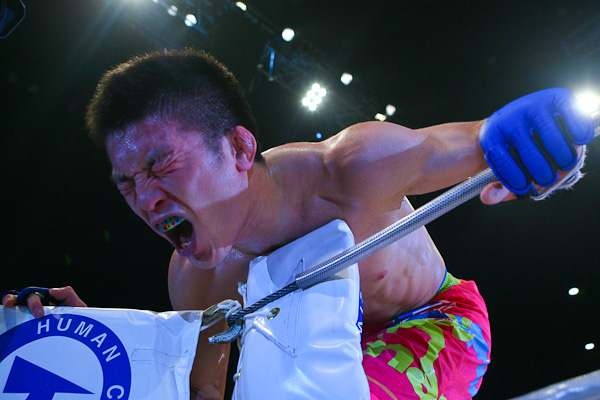 Shinya Aoki will move to One FC on Oct. 6. | Photo: Sherdog.com


Age is the name of the game in October.

Ever since the ageless Randy Couture taught us age was just a number, more and more athletes seem willing to compete into their late 30s and early 40s. Our monthly “Tussles” feature -- which takes readers around the globe in an effort to broaden their MMA horizons and showcase the best fights and fighters that might not draw much attention otherwise -- shines its spotlight on a number of bouts between martial artists in their primes and grizzled warhorses. What will prevail, youth or experience, athleticism or tactical skill, vigor or sophistication?

As always, the list does not focus on the well-promoted main event bouts from major organizations you already know to watch, but rather on fights from all over the planet that are worth seeing. Ultimate Fighting Championship , Strikeforce and Bellator Fighting Championships cards are excluded by design.

Aoki has finally arrived under the One Fighting Championship banner. “Tobikan Judan” recognized the signs of the times and in 2011 joined Evolve MMA, which has close ties to One FC. With his longtime home promotion Dream closing up shop in June, his move to the current superpower of Asian MMA became a formality. In true Japanese matchmaking fashion, he gets to debut in a huge mismatch against little-known Frenchman Lepont.

It was not easy being Latifi over the past couple weeks. Ever since the powerful Swedish wrestler was chosen to headline the next Superior Challenge event, he saw one opponent after another bow out. Originally, he was supposed to meet two-time Abu Dhabi Combat Club Submission World Championships gold medalist Jeff Monson. Then Cage Warriors Fighting Championship titleholder D.J. Linderman stepped in. Finally, Oliveira took the fight. “Van Damme” has been away from the game for 20 months, but whenever the Chute Boxe export has fought, he has been highly competitive.

MMA in Japan is not dead; it continues to exist, just without the bright lights and jumbo screens. The main refuge for most ex-Dream talent has been busy Nagoya promotion Deep. Already arriving at its 60th numbered event -- in addition to more than 120 others -- its eccentric boss, Shigeru Saeki, remains one of the main pacemakers for the sport in the “Land of the Rising Sun.” It may not be the main event, but the marquee matchup of Deep’s anniversary show pits the organization’s former lightweight champion, Kikuno, against hungry challenger Kishimoto.

“The Ultimate Fighter” Season 11 participant Henle has enjoyed some success since his appearance on the reality show, reeling off five straight wins with one draw. Most recently, he stopped Canadian warhorse Luke Harris’ 10-fight undefeated streak with a barrage of punches in less than two minutes. His next opponent, Mutapcic, promises to be an even tougher challenge. “The King,” a Sarajevo, Bosnia, native who now trains and fights out of Des Moines, Iowa, has put on one dominant performance after the next throughout his career. In 2011, he knocked out “The Ultimate Fighter: Brazil” winner Cezar “Mutante” Ferreira in just 25 seconds.

It looks to be a great month for female MMA enthusiasts, with Invicta FC’s latest event, an all-female Brace for War show in Southport, Australia, and this battle for the vacant Cage Warriors Fighting Championship super flyweight title. Young German Gaff has drawn comparisons to former Strikeforce champion Cristiane “Cyborg” Santos in wake of her violent demolitions of Hanna Sillen, Aisling Daly and Jennifer Maia. The results prompted Sexton, the elder stateswoman of mixed martial arts in the United Kingdom, to request testing for their bout. For the first time in MMA history, a non-UFC fight will be overseen by the independent Voluntary Anti-Doping Association.

After dispatching Cody East and Jason Walraven in the first two defenses of his King of the Cage heavyweight title, Lopez gets to dance with the last opponent to stop him: Shivers. The 27-year-old Texan has been in outstanding form lately, winning five of his last six fights; Shivers even traveled to Moscow for his international debut in December. Both fighters possess great size and mobility as heavyweights, and they have proven proficient at ending their fights by knockout and submission.

Scottish promotion On Top continues to churn out quality events for a passionate Glasgow crowd, featuring some of the best domestic fighters, as well as top European imports. This month, European Top 10 bantamweight Aranda will battle Cage Warriors veteran Pastor. Aranda originally comes from a kickboxing background but has developed a nice submission game in recent years. Pastor can only be described as an athlete who is super durable, dedicated and dangerous at all distances.

Florida’s Championship Fighting Alliance has seen a number of known fighters pass through its doors, including Yoislandy Izquierdo, Efrain Escudero and Gesias Cavalcante. The promotion’s eighth event will feature an all-Brazilian main event between UFC castaway Aurelio and Bellator veteran Araujo. “Maximus” remains best known for being the first man to submit Takanori Gomi during his heyday, while “BBMonster” has become feared as a dangerous puncher who has stopped several solid opponents with strikes.

At the other end of the world, talented Australian knockout artist Muir will try to bounce back from the first back-to-back defeats of his career when he takes on undefeated slugger Lokteff. Although “Massacre” Muir has faced tougher and more experienced competition, one has to notice “Igor” Lokteff’s impressive streak of finishing all of his fights by knockout, seven of them inside the first round. The winner of this light heavyweight battle seems destined to challenge Priscus Fogagnolo for the right to be considered the top 205-pound Australian not currently signed by the UFC.