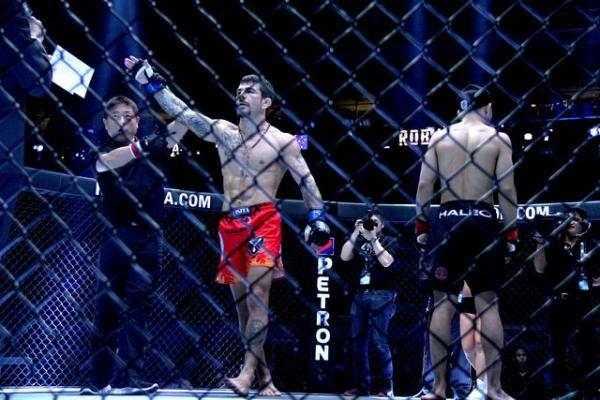 The 29-year-old M-1 Global champion will make his organizational debut against Rob Lisita in the One FC 21 “Roar of Tigers” headliner on Oct. 17 at Putra Indoor Stadium in Kuala Lumpur, Malaysia. The event will air via online pay-per-view in North America.

Gafurov agreed to terms with One Fighting Championship in January. The Brazilian jiu-jitsu brown belt has won all nine of his fights, executing six finishes, and holds a June 2012 split decision over current Ultimate Fighting Championship lightweight Mairbek Taisumov. Gafurov last competed at M-1 Challenge 47 in April, when he retained the M-1 Global featherweight crown by capturing a unanimous verdict against Lee Morrison at Orenburzhye Sport Hall in Orenburg, Russia. A decisive result against Lisita would make Gafurov a prime candidate to challenge Narantungalag’s tenuous reign at 145 pounds.

Lisita is no walk in the park. The 31-year-old Phuket Top Team representative has rattled off seven victories in his past nine outings. Lisita in December became the first man to ever submit “Lion” Takeshi Inoue, as he dismissed the two-time Shooto champion with a second-round bulldog choke under the Rebel Fighting Championship banner in Singapore. He last fought at One FC 18 in July, when he succumbed to a second-round rear-naked choke from Universal Reality Combat Championship titleholder Eric Kelly.

The Gafurov-Lisita clash is but one under-the-radar matchup worth monitoring during the month of October. Here are nine more:

Spawned by the Sakaguchi Dojo, Kobayashi has established himself as one of Japan’s top prospects. The 25-year-old lightweight King of Pancrase is 9-0-2 over his past 11 appearances and has secured 10 of his 15 career victories by knockout, technical knockout or submission. He last fought at Pancrase 257 in March, when he put away Shooto champion Kuniyoshi Hironaka with a third-round punch and soccer kick. Kobayashi suffered the only defeat of his career in 2010, losing a unanimous decision to onetime One Fighting Championship titleholder Koji Oishi -- it was a loss he later avenged. A two-time Shooto champion, Inoue has not tasted victory in more than three years but remains one of the most prominent figures in Japanese MMA.

Bedorf will defend the KSW heavyweight title for the first time. A decorated grappler and Brazilian jiu-jitsu black belt, the 31-year-old Pole will enter the match on a four-fight winning streak. Bedorf, who owns a 6-2 mark inside the KSW promotion, captured the heavyweight crown at “Clash of the Giants” in September 2013 with a second-round technical knockout against 1996 Olympic gold medalist Pawel Nastula but has not fought since. Gracie was a silver medalist at the 2007 Abu Dhabi Combat Club Submission Wrestling World Championships. The 36-year-old has rattled off five wins in his past six outings, losing only to American Top Team’s Derrick Mehman.

Once ranked in the top 10 at 205 pounds, Cane has resurfaced on the regional stage in Brazil after losses to Antonio Rogerio Nogueira, Cyrille Diabate, Stanislav Nedkov and Chris Camozzi earned him his walking papers from the Ultimate Fighting Championship. The 33-year-old heads into his latest bout on the strength of back-to-back wins, including a November decision over Fabio Silva. Cane has delivered 11 of his 14 professional victories by knockout or technical knockout. Zaneti, 35, has won seven of his last eight fights and has never gone the distance in 11 career appearances.

Two of the sport’s top middleweight prospects collide here with the vacant Resurrection Fighting Alliance championship on the line. Collier has rebounded nicely from his only professional loss -- a January 2012 submission against Kelvin Tiller -- and has posted four straight wins, three of them finishes. The 25-year-old No Excuses MMA rep last competed at a Rumble Time Promotions event in May 2013, when he needed just 92 seconds to finish Quartus Stitt with a guillotine choke. Checco, 29, has trained previously with the Chute Boxe and Gracie Humaita camps. He has stopped all seven of his opponents inside two rounds.

A longtime student of Mark DellaGrotte at Team Sityodtong in Boston, Johnston has surfaced as one of the feel-good stories on the East Coast MMA scene. The soon-to-be 44-year-old made his professional debut in 2011 and has turned away all six of his opponents. Included among his victories are 40-, 50-, 86- and 100-second finishes. Johnston won the vacant CES MMA heavyweight championship in March, when he stopped Josh Hendricks with first-round punches. Bell, 35, serves as his first title defense. The Bellator MMA alum will enter their scrap on a two-fight losing streak.

Legacy Fighting Championship will play host to two of the fastest-rising stars in the women’s strawweight division. Center wrestled collegiately at the University of the Cumberlands in Williamsburg, Ky., and now trains with the powerhouse Jackson-Wink MMA camp in New Mexico. The 27-year-old has not competed since Invicta Fighting Championships 6 in July 2013, when, as a short-notice replacement, she dropped a unanimous decision to Joanne Calderwood -- the unbeaten Scot who was later chosen for Season 20 of “The Ultimate Fighter.” A six-time Brazilian jiu-jitsu world champion and 2013 Abu Dhabi Combat Club Submission Wrestling World Championships gold medalist, Nicolini has hit the ground running in MMA. The 32-year-old Brazilian has submitted each of first two opponents with first-round armbars.

Now 41, Landi-Jons serves as one of the few remaining high-profile links to MMA’s bareknuckle beginnings. The Brazilian started his career in 1993, a little less than two months before the birth of the Ultimate Fighting Championship, and has won 28 fights, 24 of them finishes. Landi-Jons remains a threat even at an advanced age, as he is 5-1 since suffering a career-threatening leg injury at a TKO Major League MMA event in 2008. Victories over Alexander Shlemenko (twice), Jorge Patino (twice), Evangelista Santos and UFC hall of famers Matt Hughes and Pat Miletich highlight his lengthy resume. Mahteenko took a unanimous decision from Landi-Jons at an Abu Dhabi Warriors event in November 2012, the victory providing the centerpiece for the Czech’s current three-fight winning streak.

Widely regarded as the top flyweight in Canada, the unbeaten Gordon returns to the Provincial Fighting Championships organization with a perfect 5-0 record in tow. The 24-year-old last fought at Bellator 119 in May, when, on short notice, he took a unanimous decision from Chris Kelades -- the same Kelades who recently joined the ranks of the Ultimate Fighting Championship. Gordon had finished his four previous opponents. He operates out of the Adrenaline Training Centre in London, Ontario, where he trains alongside “The Ultimate Fighter Nations” winner Chad Laprise. Turner has posted wins in five of his past six appearances.

A former two-division Deep champion, Imanari has grown inconsistent late in his career -- he is 5-5 in his last 10 bouts -- but remains a threat to virtually anyone on the ground. The 38-year-old Japanese submission specialist snapped a two-fight losing streak at Deep 68 in August, when he needed just 22 seconds to dispatch Chan Jung Park with a heel hook. Hirota was cut loose by Zuffa in 2013 following an unsuccessful three-fight stint in Strikeforce and the Ultimate Fighting Championship. He has been finished just once -- Shinya Aoki’s New Year’s Eve hammerlock was the culprit -- in 23 professional outings.