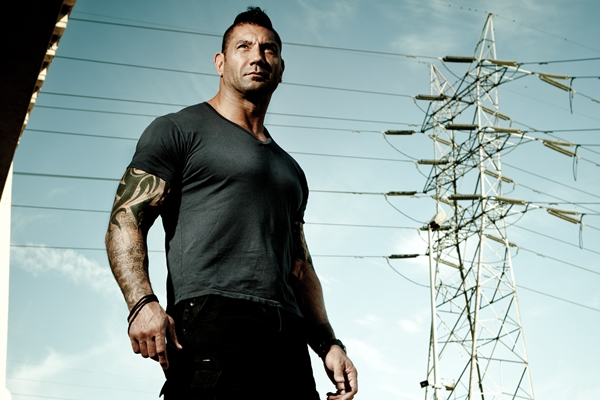 Last year, it looked as though former WWE champion Dave Bautista might join fellow professional wrestling star Bobby Lashley as a member of the Strikeforce heavyweight roster. However, when that deal died following Zuffa’s purchase of the promotion, Bautista’s aspirations of becoming a mixed martial artist appeared to die with it. That is, until the 43-year-old received a call from promoter Jimmy Burchfield, president of Classic Sports and Entertainment.

Now, Bautista stands just hours away from his inaugural MMA bout opposite veteran Vince Lucero as the headliner of CES MMA "Real Pain" The event takes place Saturday night at the Dunkin’ Donuts Center in Providence, R.I., and airs live on pay-per-view through both cable providers and BautistaMMA.com.

Ahead of his MMA foray, Bautista spoke exclusively to Sherdog.com on a variety of topics, including his MMA fandom, the Strikeforce contract that never was, two-a-day practices and pre-fight butterflies.

The question you have to be tired of answering by this point is, “Why are you doing MMA?” Anyone who has bothered to pay attention knows you have publicly stated you are a fan of the sport. I think people should now be more interested in how you developed that love of fighting. How did it grow to the point where you decided you wanted to try MMA?

It was weird. It was kind of a domino thing where one thing led to another. I started training Kali years and years ago, and then I started training standup and muay Thai for my conditioning for [my pro wrestling career]. And then I hooked up with Cesar Gracie and started really pursuing jiu-jitsu. But long before that, there was a spark, and I thought, ‘Here’s Bobby [Lashley] and Brock [Lesnar] competing. I’d really like to give it a shot.’

You mentioned training with Cesar Gracie, who runs one of the best camps in all of MMA. During that time, you were negotiating your Strikeforce contract. How disappointing was it for you when that Strikeforce deal fell through?

It was heartbreaking. I really had high hopes, and I wanted to fight for Strikeforce. I really liked the stuff they were doing and the way they worked the contracts with their fighters. I also thought they were really open-minded about the people they had fighting for them. They were bringing in other athletes. They were bringing in older guys like Herschel Walker and ex-professional wrestlers like Bobby Lashley. Also, their heavyweight division was so deep at the time and had my favorite heavyweight of all time, Alistair Overeem, as champion. That was really where I wanted to be. I really wanted to fight for them.

What hurt the most when it fell through was that they never said anything. We still had the contract on the table when they sold out to the UFC. They just kind of left me hanging. That’s what stung the most, because we had sat down with [Strikeforce founder and former head] Scott Coker on two separate occasions where he promised me I was going to have a three-fight deal with Strikeforce. I thought it was set. That was going to be my home.

Now, over a year later, you got a call out of the blue from CES promoter Jimmy Burchfield. What was your initial reaction to his offer? Did you immediately say yes, or did you have to think about it?

Initially, I didn’t think it was going to happen. You know, I’ve been contacted by other promoters, and they all just kind of wanted to make a bunch of money off of me. I wasn’t cool with that. When I made a trip up to talk to Jimmy, they were really fair about everything and just wanted to give me a fair shake. I felt really comfortable with them, and they said they wanted to do more than one [fight]. They kind of wanted to go into business with me, and that meant a lot. My manager, Johnny Ryan, grew up in Providence, so he knew guys who worked directly with Jimmy Burchfield, and that’s how it came about.

You were originally supposed to face fellow pro debutant Rashid Evans, but he was arrested this week. Now, just days away from your first fight, you’ve been paired with Vince Lucero, a guy with 45 pro fights under his belt. What has it been like for you to switch opponents so quickly and now face a guy who has been doing this for 12 years?

Honestly, it shook me up a little bit when I found out Rashid was in jail. I thought the fight wasn’t going to happen. But then I talked to my team and decided to just focus on training while [the promotion] was trying to figure out my new opponent. It was actually [UFC veteran and training partner] Justin McCully who was familiar with Vince. He said [Lucero] had a bunch of experience, but he thought that physically that I would be OK. [Lucero] wasn’t a guy who was bigger, stronger or faster than me, you know? So I could make up for his experience with athletic ability. I trust [McCully’s] opinion, so we took the fight.

My camp was over when [Lucero was chosen as the replacement]. So I’m still going to go in with the same game plan. I think my biggest enemy is not going to be Vince Lucero but my nerves and the butterflies. Those are the biggest things I’ve got to overcome.

I read that you also used to get serious butterflies before performing in the WWE. We usually think nerves are reserved for “regular” people, not for someone performing at the highest level of sports or entertainment. You openly admit that you still get butterflies?

Oh, yeah. They’re terrible. Even when I was a younger kid, I always had social anxiety to begin with. Up to my last days with the WWE, I was still the guy who was dry-heaving before I went out of the curtain, just because I was so nervous. So that’s my biggest worry. I’ve seen guys get so anxious that they just blow their wad in that first minute, and they’re done. They’re gassed, no matter what kind of shape they’re in. I know I’m in good shape. I just have to get control of those nerves and settle in.

Before you began your career with the WWE, I read you were a bouncer and also had a tough upbringing. Did you get into any scrapes in your younger years?

I was always the kid sticking up for other kids getting bullied, just because I was always the biggest kid (laughs). I bounced for 15 years in Washington, D.C. I went from working s--t hole clubs to upscale ones, and I got into a lot of scrapes along the way.

Also, growing up, me and my sister were the only two white kids in the neighborhood, so I was constantly getting in fights. I grew up fighting. I’m not a stranger to getting punched in the face. I definitely think that’s one facet [of MMA] that I do have, because I’ve done a lot of sparring, and I’ve had some great training partners this camp like Stephan Bonnar, Justin McCully and Alex Schoenauer. These guys all came in, and I sparred with them. I don’t mind. They all punch me in the face, and I don’t freak out.

You’ve said that this training camp was the toughest thing you’ve ever done. Why?

We did eight weeks of two-a-day training, five days on, two days off. When we got down to the last four or five weeks, we did a lot of sparring, and there was a lot of [me] getting sharked. We don’t have air conditioning in our gym, so it was unbearably hot. You lose so many fluids that you’re not even really rehydrated by the time you come back for second workout. I had never experienced being so exhausted that I couldn’t defend myself, but then you’ve got a fresh guy walking in the cage who’s going to beat your ass. If you have an attitude or an ego, that will put you in check real fast. It’s a very humbling experience.

You’ve been slimming down for this fight by cutting muscle in favor of speed, correct?

Yeah, we completely backed off the weight training. We just let it go and focused more on conditioning and technique. Those are the things that I am lacking in. I don’t have years of experience in those things.

When you tried out for WCW back in the day, you were told you would never make it as a wrestler. Obviously, you proved that wrong by becoming one of the biggest stars in the WWE. Some fans have a similarly negative attitude toward your MMA debut. Is there any part of your competitive spirit that wants to prove them wrong, or is this pursuit purely for you?

I did “MMA Uncensored” with [Muhammed Lawal], and the first thing “King Mo” said to me when I asked him for advice was to not pay attention to the haters. This is the way I look at it: Even if I go in there and kill this guy Saturday, they’re going to say, “Well, he wasn’t much of an opponent,” or “It was all a work or a fix.” Negative people are always going to say negative things.

I’m just doing this because I love it and because I wanted that experience of going through a training camp and competing professionally before I’m too old to do it. I’m not doing it for any other reasons. I’m not looking to get rich or be a world champion or make a long term career out of it.

If you aren’t looking to make new career out of MMA, do you then think this might be your only fight as a mixed martial artist? Or do you want to at least have a couple of fights before you call it quits?

I’d like to say that if this goes well that this definitely won’t be my last one, but if I get my ass whooped then, yeah, it will probably be my last one (laughs). Honestly, I don’t think I could train any harder. If I put the years in to get the experience, then I’m going to be 50 years old (laughs). So I’ve got to be honest with myself. If this guy f--king clocks me, and I go down, I’m probably not going to get back in there. But still, I’ll be able to get up and say, “At least I gave it a shot.” I’d rather do that and get knocked out than live with the regret of not trying.