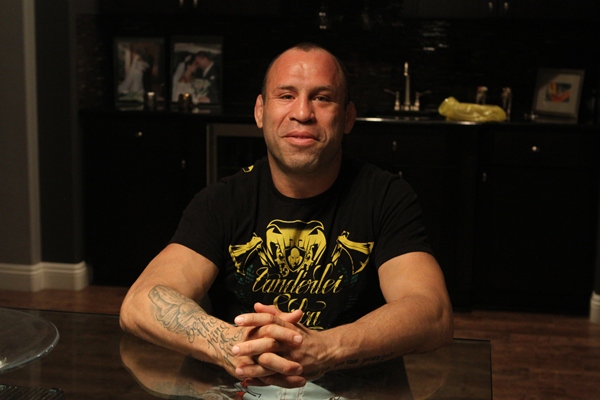 Wanderlei Silva was highly anticipated by fans at UFC 153, but the former Pride Fighting Championships 205-pound king was unable to make it to the HSBC Arena in Rio de Janeiro due to another commitment. Nevertheless, “The Axe Murderer” did manage to watch the action, calling the show “one of the best of the year.”

In an exclusive interview with Sherdog.com, Silva discussed a number of topics, including his impressions of the event and the performances of countrymen Anderson Silva and Antonio Rodrigo Nogueira, as well as a second season of “TUF: Brazil” and when he hopes to return to the UFC Octagon.

Sherdog.com: What happened that prevented you from attending UFC 153? You were highly anticipated by fans.
Silva: I'm going to Goiania on Oct. 26 and 27 for a business event. Due to this, I couldn't go to Rio. [I would have stayed] too long away from home.

Sherdog.com: And what did you think of the event?
Silva: It was fantastic -- one of the best editions of the UFC this year! There were exciting fights. Phil Davis and Jon Fitch defeated their Brazilians opponents, but they deserved it and fought well. And Anderson and Minotauro gave a great show. I was thrilled!

Sherdog.com: Did you see that Diego Brandao made his entrance with your music theme? The crowd went wild. What did you think of the honor?
Silva: Yes, I am honored to serve as an example for the new generation. We have the same fighting style, aggressive. Diego fought well, faced a tough guy, but showed blood in the eye, good absorption power and sharp takedowns. If he keeps fighting that way and keeps the focus, he has every chance to be a future champion. I wish all the luck in the world for him.

Sherdog.com: And what did you think of Antonio Rodrigo Nogueira’s victory, with “Minotauro” once again winning in Brazil?
Silva: “Minotauro” is in one of the best phases of his career. He knocked out [Brendan] Schaub, finished [Dave] Herman and almost knocked out Frank Mir. I was in the arena [at UFC 140]. I saw Mir falling flat on his face. But Rodrigo is in a good phase and is surely one of the greatest Brazilian idols.

Sherdog.com: And Anderson’s showing?
Silva: I think every sport has a guy who is different. Soccer had Pele, Formula 1 had Ayrton Senna, and MMA has Anderson. He is different, but it did not start now. He trained at a gym in a small neighborhood in Curitiba and was very dedicated. You don't make an Anderson Silva in one day. The lesson he leaves is the self-dedication. He who trains like Anderson Silva has many chances to be like him. Do not let success or the money that comes with winning change your mind. He has been a UFC champion for so long, and he still trains hard.

Sherdog.com: Did you get nervous seeing Anderson dodging Stephan Bonnar’s punches that way, when some blows connected?
Silva: The risk there was that he might be hit on the chin and knocked out, but Anderson is a man secure in what he does; he's on another level. He serves as an example for many people, for young fighters like Jon Jones.”

Sherdog.com: Some fans on forums have floated the idea of Anderson Silva and Michael Bisping as coaches, and Dana White spoke with Globo, saying he would like a Brazilian coach and another foreigner, but the network did not like the idea. What do you think?
Silva: Great. It would be nice, too. I had not thought of that! And Anderson in that “TUF” role is more than deserved. About the language problem, just [use a translator], as they did with Dana.

Sherdog.com: When do you want to fight again, and in what weight division?
Silva: I want to either fight a catchweight bout at 198 pounds (93 kg) or at light heavyweight. At middleweight, I’m very hungry (laughs). Right now, I'm doing weight training and some shadow boxing. I'm kind of on vacation now, paying attention to the family, but next year the Wand is back.

Sherdog.com: Whom would you like to face when you return?
Silva: Actually, anyone they offer is good for me. I'll face whomever the UFC wants.