The memorable mixed martial arts action of August bleeds into September, with high-profile title bouts and long-awaited rematches. UFC light heavyweight champion Jon Jones defends his crown in the signature fight of the month, while, on the other side of the Pacific, Tatsuya Kawajiri and Joachim Hansen will go at it for a second time.

Plenty of other intriguing matchups exist elsewhere, including under the One Fighting Championship banner, the first event from which will stream live on Sherdog.com on Sept. 3.

In this monthly series, we shuttle fans around the globe in an effort to broaden their MMA horizons, showcasing the best fights that might not get much attention otherwise. For September, we offer up 10 bouts from eight different countries, so fasten your seatbelts and hang on for a unique ride throughout world MMA.

Many experts already predicted the 6-foot-7 Oliveira would be snapped up by a major promotion following his second-round stoppage of choke hold expert Edson Franca in May. With an offer failing to materialize, “Lula Molusco” remained on the Brazilian circuit, where he added another win and a no contest in his next two fights. Obviously wanting to stay busy, Oliveira will now face dangerous journeyman Goncalves. “Sorriso,” always capable of an upset, is coming off two first-round submissions in Europe.

Unable to defend his title for more than 365 days due to UFC obligations, German champion Pascal Krauss had to vacate the Cage Warriors welterweight title. Battling for the coveted gold will be former CWFC welterweight tournament winner Isaksson and Grimaud, a French-born, California-based M-1 Global veteran. The Icelander may have the more significant win -- German UFC star Dennis Siver -- on his resume, but Grimaud has been absolutely on fire as of late, winning his four fights this year in decisive fashion. 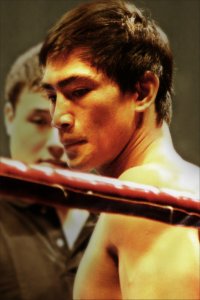 With Pride Fighting Championships rules, Bas Rutten, Matt Hume and Yuji Shimada on board, along with One FC founder Victor Cui’s prowess in the television business, the expectations for Singapore’s fledgling promotion are gigantic. Cui and Company have fueled expectations themselves by claiming to be the natural successor to the beloved Pride.

Even after leaving his longtime home, the Maximum Fighting Championship, former MFC standout Ford has had little trouble finding work across the Great White North. Having already stopped Johnny Davis, Karo Parisyan and Nick Hinchliffe in 2011, “The Real Deal” is now gunning for Hulett, a man who trains with UFC veterans Evan Dunham and Forrest Griffin. “Hollywood” is an 11-year veteran of the sport with a good positional game, strong arm submissions and dangerous chokes. At 30, Hulett needs the win over Ford to push his career to the next level.

Signing with the UFC at age 22 may have come a bit too early for “K-Taro” Nakamura. Even more impressive is the road back to the Octagon for the Yushin Okami teammate -- denoted by five wins in his last six post-UFC fights, including his triumph in the 2010 Sengoku welterweight grand prix. Now, the outstanding grappler returns to his old Shooto stomping grounds for a bout with Murayama. The 31-year-old all-rounder already derailed the career of up-and-coming Yoichiro Sato earlier this year.

Brazilian bad boy Falcao, chucked out from the UFC over legal problems in May, will be featured on another domestic super card. Amazon Forest Combat has also signed a who’s who of free agents worldwide, including Satoshi Ishii, Paulo Filho and Karo Parisyan. Falcao’s opponent will be Neto, one of the top grapplers in the world, with or without the gi. The 23-year-old Gordo black belt has only competed in MMA sporadically in recent years, but, due to the strength his insane ground game, he has all the tools to become a major crossover star.

The main event of the British Association of Mixed Martial Arts’ seventh show was originally supposed to go down between the promotion’s shingle fighter, Tom Watson, and Trigg. However, when the injury-prone “Kong” went down with a back problem in July, former Bellator Fighting Championships welterweight tournament participant Wallhead stepped up to the challenge of facing “Twinkle Toes.” Trigg, 39, raised more than a few eyebrows when he put on a wrestling and ground-and-pound clinic against knockout artist John Phillips in May. Wallhead needs to be on top of his game to avoid suffering the same fate against an in-shape Trigg.

Two of the premier wrestlers in all of MMA will clinch, throw and search for takedowns in the opening round of Bellator’s Season 5 bantamweight tournament. After wrestling his way through the promotion’s featherweight tournament in 2010, former Greco-Roman world champion Warren looks to repeat the feat in a second weight class. In two-time Freestyle world champion Vila, he faces his equal in the cage. The Cuban standout may already be 40 years old, but he entered MMA less than four years ago and has taken little damage, stopping eight of his nine opponents.

Bellator middleweight champion Lombard gets to throw down in his adopted home of Australia yet again. The 33-year-old Olympic judoka has engaged in 21 of his 33 career fights Down Under. In all of those bouts, Lombard has yet to face an opponent as powerful or as accomplished in wrestling as “The Ultimate Fighter” Season 7 semifinalist Taylor. “JT Money” has alternated between welterweight and middleweight after his UFC exit. Most recently, the 28-year-old Californian choked out 2006 Pride welterweight grand prix finalist Denis Kang in less than two minutes.