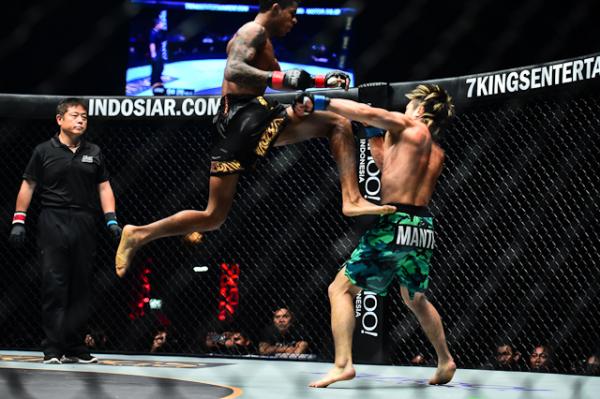 Adriano Moraes has his sights set on the One Fighting Championship flyweight title. | Photo Courtest: One FC

One Fighting Championship will soon add another divisional titleholder to its ranks.

Moraes has recorded back-to-back submission victories against Kosuke Suzuki and Yasuhiro Urushitani since he suffered the only defeat of his career -- a split decision loss to Yusup Saadulaev in November. The 25-year-old Brazilian last fought at One FC 17 in June, when he put away Suzuki with a third-round arm-triangle choke. Moraes has secured eight of his 11 professional victories by knockout, technical knockout or submission.

A Lakay MMA export, Eustaquio, 25, will enter the cage on the strength of four wins in his past five outings. The 5-foot-5 flyweight last competed under the One Fighting Championship banner a little less than three months ago, as he earned a unanimous decision over Kentaro Watanabe. Both of Eustaqio’s losses have come via decision.

The Moraes-Eustaquio title clash is but one under-the-radar matchup worth monitoring during the month of September. Here are nine more:

Two revered pioneers of women’s MMA will collide inside Invicta Fighting Championships, as “The Happy Warrior” meets LaRosa in a rubber match at the Municipal Auditorium. They have fought twice previously, with LaRosa claiming a unanimous decision at a Mix Fighting Championships event in March 2006 and Modafferi walking away with a split decision at a Moosin show in May 2010. Neither woman has enjoyed much success of late. Larosa, 36, has suffered consecutive defeats for the first time in her career, while Modafferi, 31, has dropped six in a row.

One of the sport’s premier flyweight prospects returns to the Jungle Fight promotion for the second time in nine months, as the unbeaten Mattos (7-0-1) puts his three-fight winning streak on the line. The 22-year-old Team Nogueira export has recorded three straight finishes since his March 2012 encounter with Adriano Goncalves ended in a majority draw. Mattos figures to have his hands full with Dantas, who has won four of his past five bouts -- his lone defeat in that stretch came against Mattos stablemate Jonas Bilharinho -- and choked Patrique Tavares unconscious at Jungle Fight 61 in November.

Emeev will defend his M-1 Global middleweight championship against the surging Vasilevsky, a man who has already captured company gold at 205 pounds. The 27-year-old Emeev took the 185-pound title in November 2012, when he won a five-round unanimous decision over Mario Miranda at M-1 Challenge 35. He then retained it in a rematch with Miranda five months later, stopping the UFC veteran with a third-round knee strike and follow-up punches. Vasilevsky, 26, carries with him the momentum of a seven-fight winning streak. He needed just 37 seconds to dismiss Maiquel Jose Falcao Goncalves in their League S-70 rematch on Aug. 9.

Manzanares will put his Resurrection Fighting Alliance flyweight strap on the line against Pantoja, a Nova Uniao standout long viewed as one of Brazil’s most promising young fighters. The 28-year-old Manzares won the RFA 125-pound championship with a split decision over Junior Maranhao in April. A successful amateur boxer who twice competed in the Junior Olympics, he has secured six of his seven professional victories by knockout, technical knockout or submission. Pantoja, 24, is 11-1 in his last 12 appearances, losing only to Jussier da Silva. Viewed by some as the top lightweight prospect in the sport, Barnaoui will defend his British Association of Mixed Martial Arts championship against Hawaii’s Brightmon. The 21-year-old Barnaoui last appeared at BAMMA 14 in December, when he submitted “The Ultimate Fighter: The Smashes” runner-up Colin Fletcher with a first-round rear-naked choke. Barnaoui’s only two losses, both by decision, have come to recent UFC signee Kevin Lee and undefeated Ukrainain export Islam Makhachev. Brightmon, a onetime X-1 World Events titleholder, will enter his BAMMA debut on the heels of three straight wins.

Dalby captured the Cage Warriors Fighting Championship welterweight strap in March, when he dispatched Sergei Churilov with a fourth-round head kick and follow-up punches. The undefeated 29-year-old Dane puts it on the line for the first time here, as the Rumble Sports representative draws the seasoned and well-traveled Grimaud at the Newport Centre in Wales. The 34-year-old Frenchman will aim to regain the title he surrendered in a decision defeat to Cathal Pendred in March 2013. Grimaud has posted back-to-back wins since, submitting Wade Henderson with a rear-naked choke before knocking out Bruno Carvalho in just 45 seconds.

Rising quickly on the regional circuit, Soto has submitted his first five opponents, four of them inside the first round. “Dr. Mario” has honed his skills at Team Alpha Male, where he trains alongside world-class fighters like Chad Mendes, Urijah Faber, Andre Fili and reigning UFC bantamweight champion T.J. Dillashaw. Soto, 27, last appeared under the Cage Combat Fighting Championships banner in June, when he took care of Mike Ryan with a rear-naked choke. Smith made his professional debut five months ago in Bellator, submitting Jason Powell with a first-round armbar.

With the UFC instituting a women’s strawweight division, young talents like Souza figure to find a spot in the big-stage spotlight sooner rather than later. The 23-year-old Brazilian jiu-jitsu black belt splits her training between Team Vinicius Maximo and Atos Jiu-Jitsu. Souza has submitted five of her first six opponents: three by armbar, one by triangle choke and another via heel hook. Lima, 24, has rattled off eight victories in her past nine outings, a 19-second knockout loss to Mylla Souza Torres the lone hiccup.

Todhunter has raised eyebrows with his affinity for quick work. He went 7-0 has an amateur, with six finishes in less than two minutes, and has continued his tear as a professional, with 11-, 52- and 89-second stoppages among his six victories. A former Army sniper, Todhunter touched down in Legacy Fighting Championship in March, submitting Art Parker with a first-round rear-naked choke. Avera, 32, will enter their matchup on a four-fight losing streak.
Related Articles
Latest News
+ VIEW MORE