Welterweight champion Georges St. Pierre spared no expense in advance of his rematch with Josh Koscheck at UFC 124 on Dec. 11 at the Bell Centre in Montreal, as he surrounded himself with elite training partners in an effort to retain his title.

“I brought the best I could from Brazil and the USA to help me here in Canada,” St. Pierre said. “This time, I want to finish him.”

In this exclusive interview with Sherdog.com, St. Pierre discusses his training, his popularity in America and the possibility of moving up in weight to meet UFC middleweight champion Anderson Silva.

Sherdog.com: What can we expect in your next fight? How has your training for Koscheck gone?
St. Pierre: I’m expecting to take care of him. I want nothing less than to be able to finish my opponent. I care a lot about wining, but I also care about how I win. I want to take him out. I want to finish him this time.

Sherdog.com: What are you doing differently with your training as opposed to the last time you fought Koscheck?
The difference is I have better training partners than I had, my training schedule is more organized and I also know a lot more of my opponent. This time, I’m more experienced, and my skills are much better than they were. I can’t wait to face him again. He said a lot of bad things about me, and I’m going to answer with my fist in the Octagon.

Sherdog.com: What do you expect Koscheck to do in the rematch?
St. Pierre: I think he will try to take me down. I also think he will try to knock me out with his right hand, but I know him. I’ve been studying a lot on all his fights. Being with him for eight weeks on “The Ultimate Fighter” was a great way to get to know him as a fighter and as a person. Actually, nowadays, I think I know him better than Koscheck himself.

Sherdog.com: What do you expect from the audience in Montreal, and do you think the Canadian people can set an attendance record again?
St. Pierre: I think so. Fighting is very popular here. We have a very small population, but there are a lot of good fighters. A lot of people made it to the United States, and it’s very hard for us because we are not Americans, so we have to fight all the way through to go there, a little bit like the Brazilians do in America. We are in the same situation, but it’s going to be a good night and I’m going to have a lot of support from my people. I can’t wait to do it.

Sherdog.com: You are probably the only foreigner in the U.S. that is more popular than some American fighters. How do you explain that?
St. Pierre: I think that one of the moments when I started to have more fans was when I lost my fight against Matt Hughes. Before that, when I fought in United States for the first time, the crowd was screaming and singing “USA”. After that, the second time I fought with Matt Hughes, the crowd was more at my side. I think people identify themselves with someone who lost and able to come back. It’s easier for them to identify themselves with someone like this, because it is real life. Normal people love their job. They lost their friend in car accident and people lose in real life, so I think that for them it is easier to identify themselves with someone who has lost than it is for someone who always wins. Muhammad Ali was very popular, because every time he lost, he came back and won. [Floyd] Mayweather never lost, so the people don’t really like him. I think the people like someone who lost and came back. It is more representative of what happens in real life. 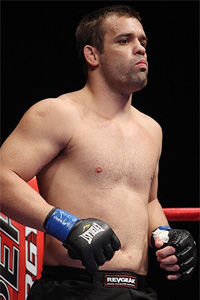 File Photo
Gustavo “Ximu” Machado
Sherdog.com: You always come to Brazil to train ground skills and sharp your ground. This time you didn’t come. You expect to fight stand up this time? Why you didn’t come to Brazil?
St. Pierre: I may not have come to Brazil, but I brought Brazil to Canada. I brought in Gustavo Machado and also trained a lot with Renzo Gracie and Bruno Fernadnes, who is one of my teachers in Montreal. I didn’t go to Brazil, but I have Brazilians in my training. I intend to come back to Brazil in December, not for jiu-jitsu but because I like the country itself and I have a lot of friends in the academy that I haven’t seen for a long time. I can’t wait to go back there and have a good time.

Sherdog.com: Many people have talked about a fight between you and Anderson Silva. Are you really thinking about moving up in weight, or do you intend to stay in your weight class for a long time?
St. Pierre: I don’t want to move up right now, and I’m going to explain to you why. I have Josh Koscheck and also Jon Fitch, who is coming back. Now there is also Jake Shields. It is pretty clear that if I go up, it’s going to be very hard to come back and get my title again. If one day I go, I want to stay at the top. I’m not going to say I will never do it, because I may do it. Probably, at some point, this will happen, but it’s going to be at the right time. Right now, I also have a training partner [at middleweight], Nate Marquardt, that’s fighting with Yushin Okami [at UFC 122]. He is my friend and training partner, so I think he deserves another chance to fight for the title. I won’t say never, but right now, it’s off of my radar.

Sherdog.com: What do you expect to happen in the fight between Anderson Silva and Vitor Belfort at UFC 126?
St. Pierre: It’s hard to say. They are both pretty good, so it can go either way. Anderson got exposed a lot in his last fight, but I will say that Vitor is a different fighter than Chael Sonnen. Vitor is very explosive. I think that if the fight ends in the first round, Vitor will be the victor. If the fight goes to the later rounds, I think Anderson will have the better chance.

Sherdog.com: Who would you choose for “Fighter of the Year” for 2010?
St. Pierre: I’ll tell the truth, I don’t really follow MMA enough to know. I do MMA every day of my life, so at nighttime, I try to do something else. I have other interests. If I don’t have friends who are fighting, I don’t even watch the fights. I just heard that Brock Lesnar lost, so I’m the wrong person to answer those questions about fighting.

Sherdog.com: What do you think about the decision to merge the WEC and the UFC?
St. Pierre: It was a great decision. Most people in the world are lighter than what you see in the UFC, so other lighter weight classes open spaces for other fighters.

Sherdog.com: Who do you think is the best pound-for-pound fighter in the world?
St. Pierre: I think a lot of guys can be considered the best pound-for-pound in the world. I think there are some guys who come out more than the others. I could say Fedor Emelianenko, Anderson Silva … now, Cain Velasquez is right there. I think Mauricio “Shogun” Rua is very good, too. If I told you a pound-for-pound ranking, it would change every month. It all depends on the performance of the athlete, and sometimes performance can change according to the opponent you face. It’s all about the matchup and many other things.