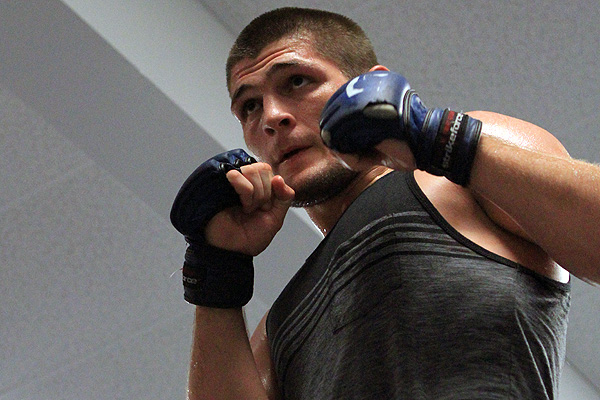 
There may be no brighter young star than Khabib Nurmagomedov in the Ultimate Fighting Championship’s lightweight division.

The 25-year-old Dagestani grappler has compiled a perfect 22-0 record as a professional, the last six of those victories coming inside the UFC’s hallowed Octagon. Though surgery to repair a knee injury will keep him sidelined until 2015, Nurmagomedov remains very much on the short list of contenders for the UFC lightweight title, which currently rests on the waist of Anthony Pettis.

In this exclusive interview with Sherdog.com, Nurmagomedov discusses the recovery from his knee injury, his upbringing and his future plans in the UFC’s cutthroat 155-pound weight class:

Sherdog.com: MMA fans are concerned about your sudden disappearance from the MMA scene. Could you tell us more about your situation?
Nurmagomedov: I got a serious knee injury during training. I needed surgery, but I’m recovering now. I hope to return to the Octagon at the beginning of next year.

Sherdog.com: How serious was the injury?
Nurmagomedov: I had a rupture of the cruciate ligament in the knee and two meniscal tears. It was rather serious, but I’m in a professional sport and few fighters ever manage to avoid injuries completely. Unfortunately, every professional fighter must go through such trials. I got this injury originally while playing basketball. After I jumped, I landed awkwardly. There was a loud cracking sound. That’s all.

Sherdog.com: What are your plans for the future?
Nurmagomedov: I’m in Los Angeles now, going through rehabilitation under the care of one of the best specialists in the world. The UFC paid for the whole treatment, and I’m very grateful for that.

Sherdog.com: What is the current status of your training?
Nurmagomedov: I’m working on restoring normal function to my knee, so I try to keep myself in good shape. I work out my arms until the leg recovers.

Sherdog.com: Have you made friends with other top fighters during your travels?
Nurmagomedov: Yes, of course. I have a lot of friends in MMA. They all turned out to be very open and simple guys, despite the fact that they’re stars. I’m especially close to my partners with the American Kickboxing Academy, where, as you know, there are a lot of prominent fighters. 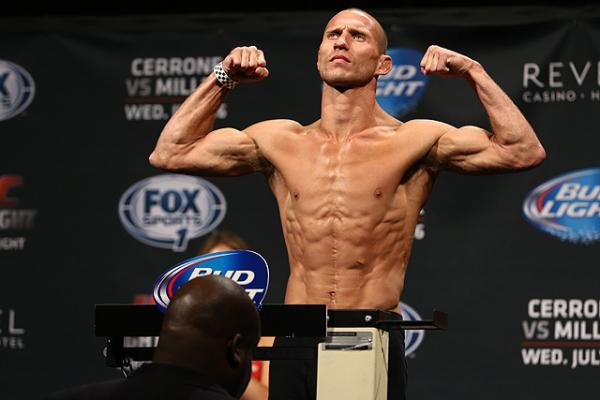 (+ Enlarge) | Photo: Dave Mandel/Sherdog.com
Cerrone was to be next.
Sherdog.com: What have you learned while competing in the UFC?
Nurmagomedov: I’ve learned a lot. In the first place, in America, I discovered a new school of training, which is radically different from ours.

Sherdog.com: Which of your wins are you most proud of?
Nurmagomedov: All of my wins are important to me, each in its own way.

Sherdog.com: What can you tell me about growing up in a fighting family?
Nurmagomedov: My father is also my coach. He used to be a great fighter in wrestling, judo and sambo. He was a champion in Ukraine in these kinds of sports. Now, my father is the highest degree of trainer. He has trained more than 10 world champions in different kinds of sports. My elder brother, Shamil Zavurov, is a three-time world champion in combat sambo. I grew up admiring him and always tried to model myself after him. My father has trained other well-known fighters like Rustam Khabilov and Magomedrasul Khasbulaev. Moreover, he is training a lot of young fighters about whom the MMA world will know very soon.

Sherdog.com: Do you think your brother, Abubakar Nurmagomedov, is a promising fighter?
Nurmagomedov: He has an 8-1 record. That’s a very good record, and I hope that next year he’ll be competing under the flag of one of the world’s largest MMA organizations.

Sherdog.com: How did you get into the UFC?
Nurmagomedov: I trained, fought and won, that’s all. In order to be successful in MMA, you must train hard and win. The rest will come naturally. Good fighters are always going to get noticed.

Sherdog.com: What are your goals in MMA?
Nurmagomedov: As all fighters do, I want to win the title and leave my mark on the history of the sport.

Sherdog.com: How did you get “The Eagle” nickname?
Nurmagomedov: The eagle is a symbol of the Dagestan Republic, where I was born and lived. I would like to be a worthy representative of my Motherland and my people, so I like this nickname.

Sherdog.com: What obligations does the UFC have to you after six fights there?
Nurmagomedov: I’m very close to the title. If you look at the rankings, you will see I’m coming up next for the champion’s belt. Even if the next fight happens not to be for the title, I only need one more fight to win it. Then the organization will have no way out (laughs).

Sherdog.com: Of your six UFC fights, which was the most difficult?
Nurmagomedov: The most difficult competitor was Gleison Tibau. He’s very big. It had never been so hard for me to topple an opponent.

Sherdog.com: To what do you attribute the fact that most of your fights in the UFC have gone to the judges?
Nurmagomedov: I don’t know. I wasn’t trying to wear down my opponents. If I have the opportunity to finish a fight early, I will certainly do it. I simply fight in the MMA major leagues, where there are no weak opponents, and it can be very difficult to take them down.

Sherdog.com: Have you met UFC President Dana White, a man who has publicly praised your skills?
Nurmagomedov: I haven’t really talked to him. We’ve only exchanged a few words, but I like the way he runs the MMA organization, where so much attention is given to the fighters.

Sherdog.com: What are your thoughts on Donald Cerrone, who was slated to be your next opponent before you were injured?
Nurmagomedov: He’s a very experienced and tough fighter. I hope someday we will meet in the Octagon. It would be a good test for me.