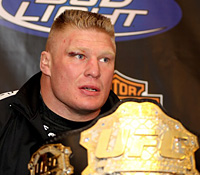 Photo by Sherdog.com
Miletich was one of the
first to work with Lesnar.
Q: What occupies most of your time when you’re not fighting?
A: Family for the most part. And other things with business ventures and stuff like that. For about two years now, a guy who did marketing for me … has been sending out mass e-mails and building Web sites with slanderous stuff about me and my gym. A judge handed down a $2.1 million judgment against him for what he’s done to me. The guy … is on the run in California now and still up to his tricks, sending out mass e-mails to people saying that I’m closing my gym and all that stuff.

Everything that you read, all these negative things that are going out to everybody, understand who it’s coming from and that basically none of it’s true. I told him he was no longer going to be part of the organization because he was threatening lawsuits around people that I did business with.

Q: You were one of the first people in MMA to scout UFC heavyweight champion Brock Lesnar when he came through MFS briefly. What are your thoughts on what we’ve seen from him?
A: Seeing him for the first time in person, you could tell that he was a great piece of clay to have in your hands as a trainer. (He’s) very big, very explosive, great athlete, great wrestler obviously. It was pretty obvious that as long as he got with somebody who was a good trainer, an experienced trainer, he was going to turn into a pretty scary guy. Greg Nelson up in Minnesota is one of the best trainers in the world. I’m happy that Brock was able to land there with him. I would have loved to have had Brock down here, but I think Brock wanted to stay closer to home up in Minnesota.

Randy (Couture) did very well given the size difference and the wrestling ability that Brock has. I think Brock fought a smart fight, didn’t go crazy and just waited for his chance. When Randy went down, you’ve got to imagine a fist that’s wider than your head hitting you. It’s not going to feel good. He’s just a big, powerful guy, and for Randy at 220-something pounds, that’s a tall order. And I’m a guy just like everybody else who learned to not bet against Randy. Randy’s a guy that pulls off a lot of great fights that people thought he was going to lose. I really wasn’t sure what was going to happen, but I had a feeling that Brock was going to be able to win the fight.

Q: What have been some of the fun stories and lasting scenes from the MFS camp over the years?
A: There’s been just so many fun times on the road with the guys going and doing different fun stuff. Just going to gun ranges and shooting guns or hanging out riding the waves at the wave pool at Mandalay Bay and goofing around and tripping the lifeguards and stuff like that. Hughes and I and Robbie used to do that a lot. We’d body surf on the waves and go flying past the life guards and pull their legs out from underneath them, just having fun with them. They knew that we were just joking around and stuff, so they’d laugh.

God, I remember one UFC, I think it was New Jersey or Connecticut at the Mohegan Sun (Reporter’s Note: UFC 35, January 2002), when everybody in the show got sick with a really violent flu. (Kevin) Randleman actually wore I think three pairs of fight shorts because he was crapping himself during his fight, having diarrhea. Dave Menne on that card fought Murilo Bustamante. Dave was so dehydrated from having the flu and vomiting and diarrhea that he was hallucinating during the fight. Jens and Matt Hughes got violently ill on that trip. I got lucky, I was one of the few people who didn’t get sick out of all the fighters, the camps, the trainers, the TV production people. I mean you name it, everybody got this flu. It just took off like wildfire through the hotel. It was crazy.

Q: Can you talk a little about your history with the IFL as a team coach and fighter and what you think happened there? We saw the rise and fall really. What’s your assessment?
A: I think the team thing, instead of going with the camp thing right off the bat, might have caused some problems with kind of the hokey names of the teams. It was something that didn’t sit well I think with the fans. And I think not having people in place who knew the MMA business. I mean, being a smart businessperson is one thing, but knowing the MMA business is another thing also. I think they needed more people who knew the fight game a little more in control of that organization. People that start fight organizations will hopefully take lessons from that and hire people that are well respected and have experience in the MMA game to be the face of their organizations. I think they were all smart businesspeople, but they didn’t understand the MMA game and the demographics and maybe the way to market it.

And having a gigantic staff with large payrolls also does damage. With the IFL and Pro Elite, we’ve seen both with a lot of payroll. That causes problems. I mean you don’t need a million people to run an organization. Monte Cox used to run shows by himself, he did 300 shows on his own and was always profitable. I think he probably had two shows where he didn’t make money out of all of those. He’s a bright guy and knows how to run shows, so anybody that’s planning on starting anything really big might want to look towards people with experience like that.