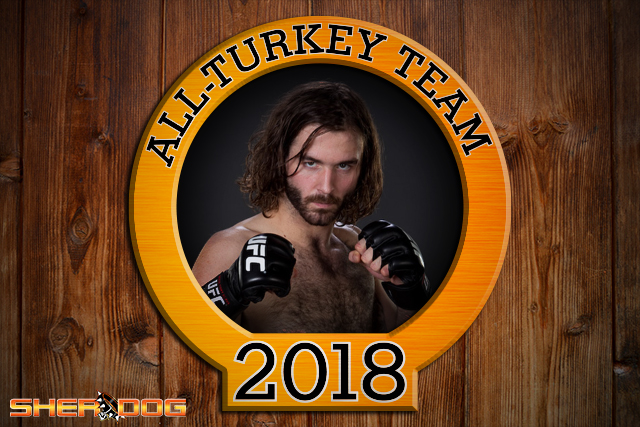 
At this point, McKenzie’s second career as a source of memes and punchlines has far outlasted his run as a legitimate Ultimate Fighting Championship-level competitor. Coming into Season 12 of “The Ultimate Fighter,” McKenzie was an oddity: an unheralded yet undefeated prospect from Alaska, with a mind-boggling nine straight wins via guillotine choke.

While McKenzie performed well enough on the show to earn a UFC contract, things quickly went downhill from there. He proved not to be UFC material, and his 31-second fight against Chad Mendes at UFC 148 stands out as one of the worst mismatches in modern UFC history. He was released after a dispirited decision loss to Sam Stout at UFC of Fox 9, probably due to his 3-3 mark in the promotion but certainly not helped by the fact that he had shown up to fight in white basketball shorts with the tags still hanging from them. He also had to borrow a mouth guard. I only wish I were making that up.

Once out of the UFC, it was more of the same but worse; McKenzie cropped up on the radar of the average fan only occasionally, in stories that were usually sad and ridiculous in equal measure. In December 2014, he retired, or in his own words, “I’m done fighting I would call it retiring but I never made no money so yea I quit.” Two months later, he un-retired and signed with World Series of Fighting. McKenzie’s WSOF tenure lasted one fight, losing via disqualification for a blatant head butt with which, from top position, he speared with the crown of his head the chin of an opponent trapped against the fence. From there, he fought on in smaller promotions. The onetime featherweight-lightweight showed up looking increasingly out of shape for welterweight fights and even a 180-pound catchweight bout he actually won.

All of this is just to say that given the prosaic brand of pathos we had come to expect from “The AK Kid,” it would have taken a special kind of buffoonery to elevate him to this list. He has now provided it. In September, McKenzie ran afoul of the Nevada Athletic Commission for refusing to provide a urine sample in the hours before a scheduled fight. However, that doesn’t really convey the sheer goofiness of this whole situation. From the NAC report:

“On Sept. 14, 2018, prior to his contest at the Orleans Hotel, he was given a valid request by a commission representative to provide a urine sample before his bout, but the respondent, Mr. McKenzie, refused and declared that he was going to go to his room and would not provide a sample until it was closer to his bout. When the respondent did return and provide a sample, the sample itself registered as abnormally high -- in temperature, that is. When he was confronted about this, he made several representations including that if, ‘this’ got out, he would lose his job, as well as an admission that he had smoked pot that day.

“When the respondent was asked if he had anything hidden on his person, he at first denied it, but upon further questioning, he ultimately relinquished from his clothing a bottle of urine substitute. This bottle, which he had concealed on his person, in his clothing, was capped with a nozzle that would let its liquid contents be streamed from it. The bottle, itself, contained a warm, yellow-tinted liquid that match the false contents of the sample he provided. Additionally, the bottle had a hand-warmer attached to it by a rubber band. This conduct by the respondent is not only an anti-doping violation, but it also violated other regulations that govern the commission.”

Suffice it to say, a chain of decisions that ends with someone sheepishly handing over half a bottle of fake pee to a commission official was probably not the smartest. While I don’t think cannabis should be prohibited out of competition, smoking it on the day of a fight is next-level dumb. However, McKenzie was not the first and probably won’t be the last athlete to try and fight high, nor the last to try and pass off a fake urine sample. What takes this whole travesty to the next level is the aftermath.

McKenzie no-showed his hearing, and in his absence the NAC, which sees marijuana and lack of respect as its two greatest rage triggers -- just ask Nick Diaz -- slapped a four-year suspension on him. McKenzie responded by accusing a commission representative of sexual harassment, claiming that … well, let’s just hear it from the man himself:

“They said if I didn’t piss in a cup right before my fight -- literally I was warming up -- my fight was about to happen in five minutes and they’re yelling at me, telling me I need to take the piss test and I’m like, ‘No, I can’t take a piss right now. I’m warming up for my fight. I’ve never [expletive] taken a piss in my life before a fight. I’ve fought for 15 years. Leave me alone.’ We start fighting back and forth, they started saying we’re not going to let you fight unless you [expletive] piss in the cup. So I [expletive] just went in the bathroom and poured something in the cup and it was funny because I was telling them I wasn’t going to let them watch me pee.

“And one of the [commission inspectors] whipped out his [expletive] dick, ’cause he’s like, ‘Oh, it’s not that [expletive] hard.’ And he takes his dick out and shakes his dick at me. I was like, ‘Dude, that’s [expletive] sexual harassment.’ You can’t do that. That’s bulls---, you know? There was five or six witnesses standing right there. Nothing ever came out about it. I talked to the commission about it countless times, they just keep saying there’s an investigation going on, which I haven’t heard a thing about it, they won’t talk to me about any of it. I’m like, ‘You guys are ridiculous. You guys are [expletive] crazy.’ That’s nuts to me. You don’t pull your dick out and shake it at somebody, especially in this day and age.”

These revelations are barely a week old and the story, such as it is, is still playing out. I don’t know whether McKenzie’s accusations are true, though they seem implausible. True or not, though, this final chapter places him firmly onto the All-Turkey Team.