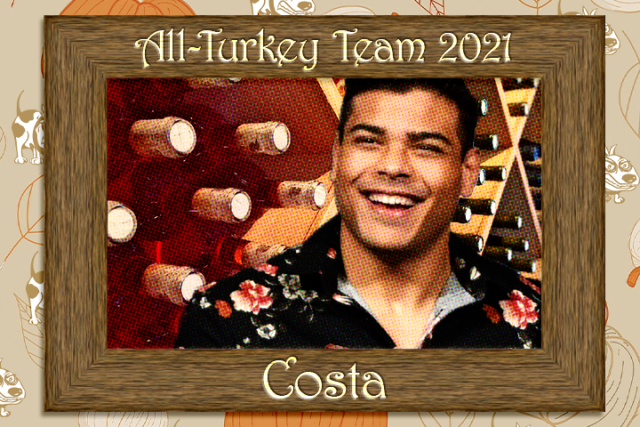 
At first glance, it seems like it would be difficult for Costa to surpass the nonsense that surrounded the aftermath of his title loss to Israel Adesanya in October 2020, when he revealed that he drank an entire bottle of wine to help him sleep the night before their middleweight title clash at UFC 254. That indulgence, the Brazilian claimed, hindered a performance in which “Borrachinha” very nearly directed more taunts than strikes in the direction of his opponent.

Unfortunately, “Borrachinha” has continued to trend downward in 2021. First, Costa declined a proposed bout against Jared Cannonier in August, citing fighter pay issues as the reason behind his refusal to sign a contract.

“UFC needs to pay me as main fighter to have fighting in main events,” Costa wrote on Twitter. “Youtubers are showing all disgrace on this business.”

Few would disagree that UFC athletes deserve a greater share of the promotion’s revenue, but the timing was curious for Costa, who was coming off an effort in a championship bout that UFC President Dana White simply described as “weird.”

After coming to terms with the Las Vegas-based promotion, Costa had a chance for redemption when he signed on the dotted line to face Marvin Vettori in the UFC Fight Night 196 headliner on Oct. 23. A few days before the bout, it became apparent that professionalism was not Costa’s main priority when he revealed that he was not planning on making the contracted middleweight limit. The Brazilian rationalized this transgression by claiming the fight would be more entertaining at 205 pounds than it would be at 185.

“I think this fight will happen,” Costa told assembled media. “It just will not happen if he don’t want to fight me. Maybe we can do a catchweight 195 [pounds]—maybe—but I think make this fight [205 pounds] could be more exciting to the fans.”

It would have been perfectly reasonable for Vettori to decline a fight that was suddenly being contested, first at a catchweight and then a full weight class above where it was originally expected, but “The Italian Dream” agreed to Costa’s terms. Despite relinquishing a portion of his purse to his opponent, Costa seemed to enjoy the heel role. That did not matter inside the Octagon, as a visibly smaller Vettori rode a high-volume approach to a unanimous decision triumph at the UFC Apex in Las Vegas. After the defeat, Costa claimed that a biceps injury hindered his ability to cut weight, while showing little regret regarding his inability to hit the middleweight mark.

“I came here and the UFC suggested to fight at a catchweight or 205, and I just said, ‘Yes, let’s go.’ I don’t care for weight,” Costa said. “This is a fair fight. Both guys made weight on the same day at the same limit, so what could be more fair than that?”

Perhaps Costa should have cared a little more if he still harbors dreams of capturing a middleweight title and securing a rematch with Adesanya.

“We absolutely tell you where to fight when this happens,” White said afterward. “He’s gonna have to fight at 205 [going forward].”