Armed with a degree in physical education and a minor in special education from Arizona, Levi sought refuge in coaching at Pueblo Magnet High School. She became the first paid female high school football coach in Arizona, and she gradually gravitated toward the wrestling room. She watched and absorbed, becoming a staple around the football and wrestling teams. In a strange quirk, that led to a chance meeting with Frye. After the wrestling team rolled up its mats, a judo class followed. Levi began delving into judo and working out with the wrestling team. She volunteered for everything.

“I’ll never forget the day one coach asked me if I wanted to run this drill with the football team, and I was like, ‘Heck, yeah,’” Levi said. “I just kind of hung out and watched and ran some drills. Then I did strength and conditioning in the summer. I would go to every football practice and learn. I feel I’ve been gifted with that ability to teach. I was still training for the Olympics, and I’d get in trouble with my throws coach because he didn’t want me doing it; but the judo came a little bit late into my throwing career. The two didn’t really overlap.”

Around this time, Frye and Levi began working out together. Frye broached a trip to Casper, Wyo., in the summer of 1995. Severn was competing under the Ultimate Fighting Championship banner at UFC 6.

“Don mentioned to me that we go see Dan Severn, who was his coach at one time, in Wyoming,” Levi said. “I was just hanging out and they told me they were going to meet Dan. I [asked], ‘Who is he?’ I had no clue. We went to the event. I had a good time. I came back home and the next thing I know I get a phone call, and it’s Dan.”

Within a week or so after first meeting him, Severn asked Levi if she had a resume. She wondered what kind. He told her he was looking for an athletic resume. 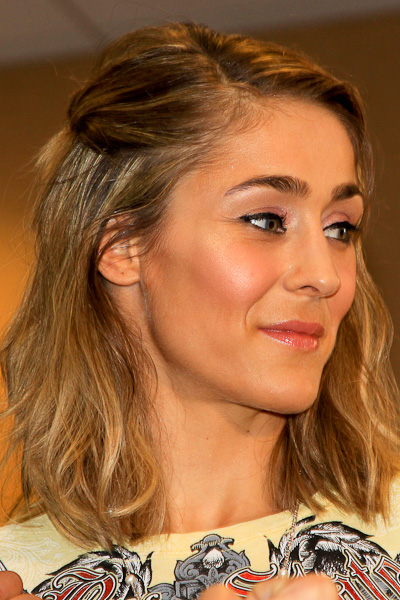 Photo: Mike Fridley/Sherdog.com
Coenen submitted Levi in 2000.
“Why would I need that?” she asked. “Then he said he thought he could get me a fight in Japan. I said, ‘a fight? I don’t fight.’ He told me I had some wrestling background, and why don’t I put a resume together. During this time, Frye was training for [the] UFC and I was training with him. I was very surprised. There was no UFC for women at the time. I was like, ‘You have to be kidding me.’”

Severn was not kidding.

With two weeks’ notice and with Levi never having fought before, Severn submitted her name in the tough women’s world championships. She took up boxing training, along with everything else she was trying to balance. She remembers how her calves burned from three rounds of jump rope and then three rounds of shadow boxing before she was allowed to hit the heavy bag.

“I’m hitting the heavy bag and my hands are killing me; I was thinking, ‘How is this going to work?’” Levi said. “I kept going every day, thinking ‘This is terrible.’”

Still, she kept going, and she liked it. She reached the final of the tough woman show, which provided enough evidence for Severn that Levi would be OK in Japan.

In her MMA debut, Levi destroyed undersized Yoko Takahashi on Nov. 17, 1996, when Takahashi’s corner threw in the towel, submitting under a barrage of punches 2:14 into the first round of their U-Japan matchup.

“The first thing Dan told me after that was, ‘This is the deal. If you annihilate everyone, you won’t get any fights,’” Levi said. “My whole career, I was really, really lucky to get any fights.”

She points to her submission victory over Betty Fagan in March 1997 as her most memorable fight. Levi admits she regrets her loss to Coenen in the ReMix World Cup 2000 competition, as she re-aggravated her back injury the day before they left for Japan. Severn, now coaching her at the time, asked Levi what she wanted to do. She told him she wanted to compete. The flight to Japan was a nightmare, as Levi could not sit without experiencing unbearable pain. Even so, she won her first two tournament bouts before Coenen halted her run.

We were nowhere near
what the sport of women’s
MMA is today. You have a
coach today for everything.
We didn’t have that when
I was coming up.”

“You take Ibuprofen and you fight, and I had to fight; but I really couldn’t fight at all,” Levi said. “I look back [and] it’s funny with hindsight and everything, but that was the competitor in me. I wanted to go out and win. I won a couple of fights and then got caught in that crazy flying armbar that nobody gets out of, and the girl got me. I didn’t tell anybody what was really going on; that’s the one thing I was hoping to get some redemption for, because you hope to end your career with a win.”

Though she never fought again, Levi still experiences the spoils of victory each time one of “her kids” wins.

“I am a walking mess, though,” she said with a laugh, “but I am in a great place. I love working with athletes and a lot of post-surgery therapies. I have 20 kids playing college sports. Two of the kids that worked for me I coached in college. I’m able to teach and educate other coaches, because I want to teach them everything I know. I want them to be better than me. My biggest regret is that my father didn’t live long enough to see me coach football. He died the first day I was a paid coach. I know he would have loved to see that.”