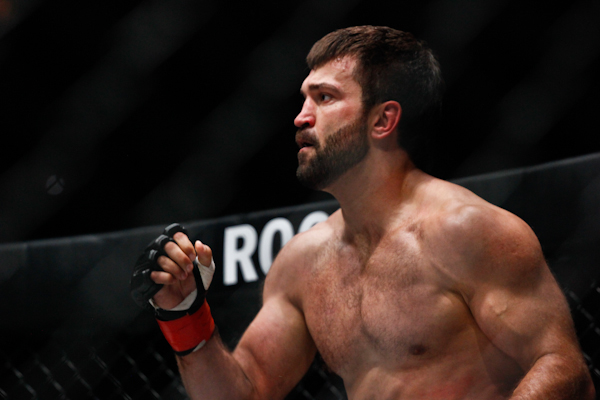 After winning the interim belt, Andrei Arlovski was later given the undisputed label. | Photo: Martin Hocson/Sherdog.com

HOW WE GOT THERE: The heavyweight title picture was wrought with problems and scandals at the time. Josh Barnett was stripped of the belt shortly after steroid-hammering it off of Randy Couture at UFC 36, and just two degrees of separation later, history repeated itself when Tim Sylvia was stripped for testing positive for anabolic steroids, as well. While performance-enhancing drug use is problematic for any division, the ultra-thin heavyweight class could hardly afford to lose its most viable stars. Sylvia was later given a chance at redemption, fighting rising star Frank Mir for the vacant title at UFC 48 in what was spun as a coming-clean narrative for “The Maine-iac,” who was then one of the UFC’s biggest draws. With a 7-1 record, Mir was an intriguing prospect as a big fella with the savvy submission skills of the smaller divisions. However, as was often the case back then, he was the David to Sylvia’s 6-foot-8 Goliath. This time, the original tale turned out to be quite true in relation to how the events played out: Mir submitted Sylvia, then 16-0, with an opening-minute armbar in what remains one of the most gruesome ends to a fight in UFC memory.

WHAT HAPPENED NEXT: Months removed from his championship performance and days away from his wedding, Mir suffered a horrific motorcycle accident that snapped his femur and shredded knee ligaments. Staring at seven and a half months of championship inactivity in the UFC’s historically most-watched weight class, the powers that be granted the division’s first interim championship match between Arlovski and what they hoped would be steroid-free Sylvia. In MMA’s appropriation of “the ball never lies,” Sylvia was again submitted within the first minute, awarding the Belarusian the interim crown. A total of 231 days went by before the UFC elected to install the interim belt.

UNDISPUTED: Although fans clamored at the thought of a title unification bout between Arlovski and Mir, it never materialized. Mir stayed on the shelf, with doctors assuring him his competitive days were over, and after 14 months had gone by, Mir’s title was officially stripped. By then, Arlovski already had one interim title defense under his belt and went on to defend it a second time as the undisputed champion before relinquishing it to longtime title picture photo-bomber Sylvia.

Continue Reading » The Brazilian was sold as unbreakable, capable of coming back from harrowing brinks to win fights; and he did just that, submitting the giant with a guillotine choke after two rounds of receiving punishment. In doing so, he became the first man to hold titles in both organizations and the third Pride transplant to capture UFC gold.