In December 2000, Inoki and Pride worked together for a year-end pro wrestling event at the Osaka Dome. A year later, they teamed up with K-1 to make another year-end show, adding combat sports to Japan’s New Year’s Eve television diet. The money was big, and the ratings were even bigger. As a result of this new business relationship, Inoki rewarded pro wrestlers who engaged in worked or real fights in both Pride and K-1, pushing them as pro wrestling titleholders in the New Japan ring. Not surprisingly, the traditionalists were furious. However, Inoki blurred the lines and was putting himself over on a grand scale. He was truly the king of fighting celebrities.

The major players ran a show together at National Stadium in Tokyo in 2002, attracting more than 70,000 spectators. Sakuraba, the national hero, lost to K-1 superstar Mirko “Cro Cop” Filipovic. “Cro Cop” was an ace of K-1, much like the unstoppable Emelianenko was an ace for Pride. Both men also happened to be managed by Australian power agent and contract lawyer Miro Mijatovic. 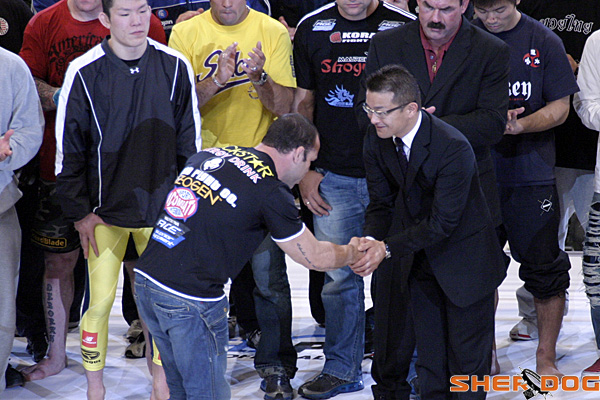 Photo: Stephen Martinez/Sherdog.com
Sakakibara once fronted Pride.
In early 2003, the front man for Dream Stage Entertainment was found dead in his hotel room. Naoto Morishita, who was largely unassuming in public, was accused of having an affair with a woman and taking his own life. It was instantly perceived in the Japanese press as a classic gangland murder covered up as a suicide. Magically, an aggressive man of Napoleonic complex named Nobuyuki Sakakibara soon became the new Pride boss. According to power agent Mijatovic, a major encounter took place at Pride’s November 2003 Tokyo Dome show, as two yakuza factions supposedly had a showdown over Pride ownership. Sakakibara’s side allegedly won the showdown and original backer Hiromichi Momose left.

However, Inoki was not actually running the show; that role was played by a self-admitted yakuza fixer named Seiya Kawamata. Kawamata and Mijatovic claimed that Pride paid Filipovic to not fight on Inoki’s show and threatened Mijatovic regarding Emelianenko’s contractual rights. Mijatovic later claimed Kawamata stiffed him on money. Kawamata sued Nippon TV the following year for a canceled New Year’s Eve television contract. To say the least, the fallout from New Year’s Eve 2003 was calamitous.

In Japan, the hypocrisy surrounding the yakuza is a confounding case of wilful blindness. However, once allegations go public, the outrage is immense.

“Shukan Gendai” printed diagrams and flow charts in its pages, detailing the supposed criminal hierarchy of Pride, allegedly helmed by a shadowy individual called “Mr. I,” an ethnic Korean and Sakakibara backer. The uproar caused by public claims from Kawamata and Mijatovic gave police sufficient cause to raid Fuji TV’s offices and give executives an ultimatum regarding the future of Pride on network television. Despite wildly successful television ratings, Fuji TV pulled the plug on Pride and DSE in June 2006. “Shukan Gendai” later claimed that Mr. I returned to South Korea following the scandal.

Meanwhile, Inoki, dealing with a hornet’s nest of a pro wrestling operation, sold the assets of New Japan Pro-Wrestling to video game company Yukes. Inoki still had a symbolic presence in the sport, but his power was gone. Yukes was left to clean up his mess of an organization and returned NJPW back to a more traditional wrestling operation. 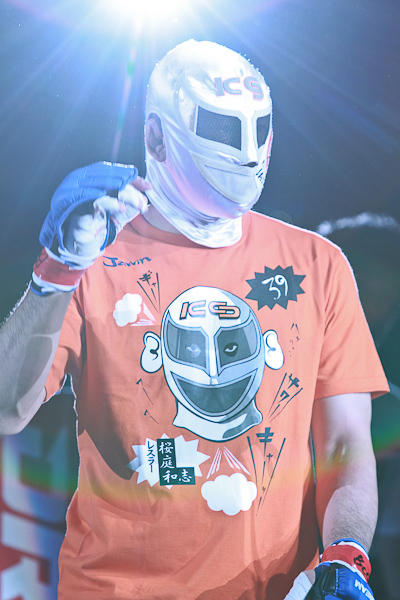 Photo: Taro Irei/Sherdog.com
Sakuraba was an unlikely MMA superstar.
Forced to search for new sources of cash, Pride turned to the United States. The promotion ran two successful shows in Las Vegas thanks to the support of Ed Fishman, the casino gaming entrepreneur behind Players International; he saw visions of attracting major Asian gamblers to MMA events. It was the only way he could see making MMA desirable to casinos. After all, casino money was the route that made the UFC what it is today. He claimed that Sakakibara asked for a loan and Fishman instead offered to buy Pride. However, what Fishman did not know at the time was the fact that Sakakibara was negotiating with UFC representatives to sell Pride assets to them while the second Pride Fighting Championships show was happening stateside in Feburary 2007. The UFC bought Pride and tried to open up shop in Japan. However, the foreigners encountered resistance from Pride’s workers, and the UFC elected to give up. The organization came to Japan years later under a sold show contract with Dentsu, Japan’s largest ad agency, for a once-a-year event schedule.

Sakuraba, along with enfant terrible Norifumi “Kid” Yamamoto, gave the league some star power, but the project largely did not accomplish what Kazuyoshi Ishii and matchmaker Sadaharu Tanigawa thought it would.

The master plan for K-1 officials in the post-Pride era was simple: since they controlled the broadcast television pipeline in Japan, any promoter that wanted to do something on a big scale had to work with them. K-1 was interested in the TV money in exchange for putting the responsibility of the live gate on promoters. However, K-1’s grand plan had a major flaw. The plan worked in theory, as long as you were continuing to draw big television ratings. The problem: in the post-Pride era, K-1’s TV ratings for both its kickboxing and MMA properties started declining. Network television support for K-1 waned, as well. K-1 eventually lost television support, and the organization died a drawn-out, inglorious death, with assets being sold to Japanese real estate firm Barbizon Corporation Limited in July 2011.

Recent anti-yakuza laws in Japan have applied major pressure on the gangs. The lack of yakuza cash and network television support has crippled the MMA scene on a large scale in Japan. Companies like Shooto and Pancrase continue to promote and turn out fighters, but it is expected that the nation’s best have their eyes set on the UFC. Many simply remain hopeful that an interesting or charismatic Japanese athlete will reinvigorate the market. As of now, there is not one in sight.

The one common denominator in the history of the Japanese combat sports boom was Inoki. Now at age 70, he is trying to get back into politics. Perhaps even the Godfather sees the writing on the wall.