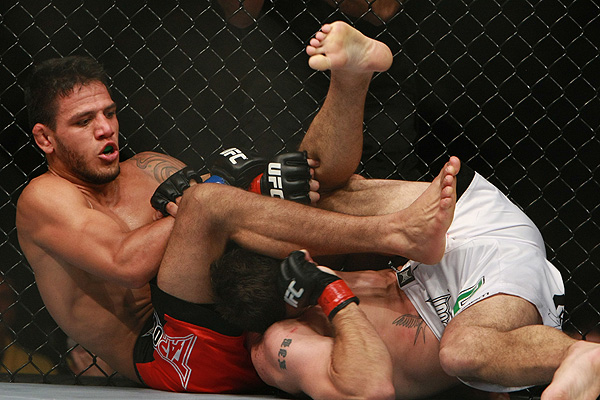 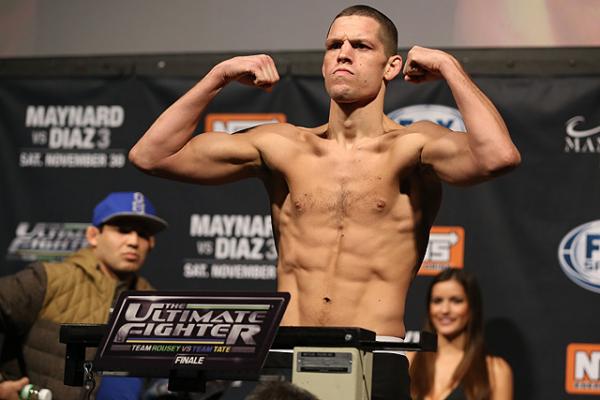 Photo: D. Mandel/Sherdog.com
Diaz always entertains.
THE MATCHUP: The priceless, needle-moving Diaz returns from a long contract dispute and gets a tough draw in his comeback fight. Dos Anjos vaulted into position for potential stardom with a flying knee and subsequent knockout finish against Benson Henderson in August, although he has been performing like a top-10 lightweight for several years now. Diaz knocked out Gray Maynard in November 2013, which broke a two-fight losing streak. This should be a fun, action-packed matchup between two of 155’s best.

While it took years for dos Anjos to transform himself from an athletic grappler to a well-rounded mixed martial artist, the end product has certainly been worth the wait, and his game today is a testament to a lifetime of work under some of the world’s best coaches. The Brazilian’s striking game has grown ever more venomous, as he has slowly harnessed his natural athleticism to a more technical and methodical approach. Fighting from a southpaw stance, he works head, body and legs together and punctuates his combinations with absolutely crushing kicks at all levels. He moves well, takes clean angles and is very difficult to hit squarely. Dos Anjos is also a superb wrestler, one of the very best in the division, with outstanding takedown defense and a deep offensive arsenal of authoritatively finished doubles and trips from the clinch. On top, his heavy base makes him difficult to shake off, and he passes with aplomb; while not much of a submission threat off his back, he is active, can avoid damage and shuts down his opponent’s passing game fairly easily.

At this point, we should know exactly what to expect from Diaz: volume boxing on the feet with an emphasis on pressure and better power than we might expect; underrated throws, control and strikes in the clinch; and a treacherous submission game both in transition and off his back. He does not move well laterally and is intensely vulnerable to low kicks -- all kicks, really -- while a strong grappler can neutralize him in wrestling control positions and even inside his guard if he maintains a heavy base and is conscious of his posture. He does his best work with his opponent’s back to the cage but lacks the clean footwork necessary to consistently push polished strikers into that compromising position. Despite those flaws, Diaz is a dangerous fighter and a tough matchup for anybody outside the division’s elite.

THE PICK: This seems fairly straightforward to me. Dos Anjos has good movement, takes clean angles, kicks like a horse, has good cardio and always brings a strategic, measured approach with him into the cage. Those are the basic components of the tried-and-tested game plan to beat a Diaz; barring some drastic improvements in Diaz’s game, the outcome -- dos Anjos kicking the heck out of Diaz’s legs and working the occasional takedown -- should be predictable. The pick is dos Anjos by clear decision.