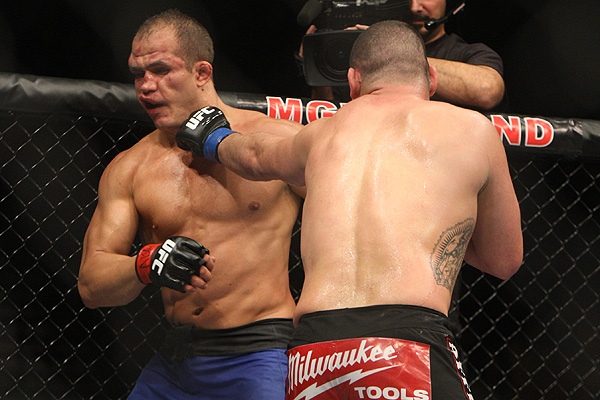 Heavyweight: Now with two UFC heavyweight titles to his name, Velasquez also becomes a two-time first-team All-Violence member. After a disappointing 2011, culminating in his 64-second network-televised title loss to Junior dos Santos, Velasquez put on a grotesque beating of Top 10 regular Antonio Silva before battering dos Santos to take his title back in a bout that will be a reference point for gut-turning 25-minute beatings for a long time to come. He took down dos Santos a staggering 11 times while landing 210 total strikes. Hell, Silva landed just three strikes to Velasquez’s 53. It is no wonder that Velasquez is the all-time leader in Significant Strikes Landed per Minute (SLpM) according to FightMetric, landing 6.37 per 60 seconds. If he is not the most violent MMA fighter to date, Velasquez is perhaps the most punishing.

Light Heavyweight: For as long as there as been an All-Violence Team, Jones has been a first stringer. Admittedly, 2012 was a down year for the 205-pound king, but context allows “Bones” to excel past his competition here. He could not finish Rashad Evans in a fairly tepid fight; however, he still dominated an outstanding MMA fighter in a fashion that inspired pathos from the viewer. FightMetric tallied the final effectiveness scores at 400-134 for the champ. However, he sealed the deal in September. Sure, Vitor Belfort might be a “young dinosaur” or whatever the heck he called himself. However, Jones casually yanking out of Belfort’s armbar before battering him helpless and casually snapping his arm with a keylock as if he were a white belt deserves all praise. To boot, he even launched an offensive against Zuffa and managed to record a stoppage win over UFC 151. No other fighter this year is guilty of any violence like that.

Middleweight: In a year where few middleweights consistently delivered thrills and chills, Manhoef stood out. His year started out by kicking Yoshiyuki Nakanishi’s kneecap so hard that he ripped a bloody vortex in his own shin, resulting in a no contest. He then used rock-headed South Korean Jae Young Kim for target practice, blasting him with left hook after left hook until he got tired of punching him. His one-hitter quitter of Ryo Kawamura as he attempted to bail on a double-leg shot was priceless and a primer on how to punish a desperate wrestler. For whatever reason, however, “No Mercy” saves his best for New Year’s Eve and on Dec. 31, he delivered again, gut checking Denis Kang with a brutal knee to the liver. Manhoef’s 2012 mixtape of carnage is well worth the time it will take you to YouTube it all.

Welterweight: Barely a .500 fighter and having lost four of his last five in the UFC, Matt Brown seemed like a prime candidate to catch a Zuffa pink slip in 2012. Instead, working with trainers Matt Hume and Mark Beecher, he produced a 4-0 campaign in the Octagon -- the only fighter to do so in 2012 -- and stopped three of his foes. The likes of Chris Cope, Stephen Thompson, Luis Ramos and even Mike Swick hardly represent the welterweight elite. However, Brown did not simply best them; he trashed them. Brown's stalking, brawling style featured cleaner, straighter punching this year and produced some devastating results, most notably making Swick do the Nestea plunge live on Fox to end the year in style. A Matt Brown beatdown is akin to a technical bar fight; UFC welterweights ought to consider themselves lucky no pool cues are in sight.

Lightweight: Being a well-rounded, action-oriented fighter is no guarantee of All-Violence status, especially at 155 pounds, where that description is commonplace. However, Miller simply brings a greater level of thrill with a greater level of regularity. After wiping out Melvin Guillard with his submission savvy, Miller was stopped for the first time in his career courtesy of Nate Diaz's guillotine in a predictably awesome fight. By the time his UFC 155 bout with Joe Lauzon came around, everyone and their mother knew that action would ensue; yet few, if any, anticipated the actual level that would result. In one of the year's best contests, Miller mutilated Lauzon's face into a bloody gnarl, looking like a man possessed in the pursuit of his prey. When Miller shows up on your TV set wearing four-ounce gloves, the highlight of your evening is probably forthcoming.

Featherweight: Swanson might have been the year’s most violent MMA fighter. Swanson’s hands were once known strictly as brittle, but, in 2012, they proved to be brutal. After humiliating George Roop and sending his mouthpiece into orbit, Swanson dropped jaws by not just out-punching skilled boxer Ross Pearson, but by punching out his lights. Did gangly Brazilian offensive wiz Charles Oliveira make him blink in September? Nope. Swanson’s overhand right wiped out his foe out and thrust him into 145-pound contention. Simply put, Swanson kicked the ass of every man he met in 2012 in debasing fashion.

Bantamweight: One of MMA's biggest pound-for-pound punchers, Rivera earned a second tour of duty in the UFC the old-fashioned way: by improving his game and knocking out dudes. After ripping up Michael McDonald's younger brother, Brad McDonald, in December 2011, Rivera started 2012 with a bang, blasting rugged Mexican Antonio Duarte and leaving him unconscious for several minutes. In his UFC return, Alex Soto wanted no part of his power and backpedaled for 15 minutes while getting repeatedly dinged in the head. The Calgary Combative Sports Commission might have taken away Rivera's July win over Roland Delorme after testing positive for an over-the-counter stimulant, but it cannot take away the 52 significant strikes and world of pain that Rivera put on the Canadian in just four minutes.

Flyweight: Moraga is one of many reasons that John Crouch's MMA Lab is becoming known as much more than “the place that Benson Henderson trains.” A 5-0 campaign with three stoppages is always nice, but Moraga saved his best for the Octagon. Following his UFC debut crushing of Ulysses Gomez, the Arizonan had a true flyweight-style action scrap with Chris Cariaso, softening him with a flurry of strikes before segueing into a nasty guillotine. That is precisely the sort of dynamism onlookers expect of 125-pounders.