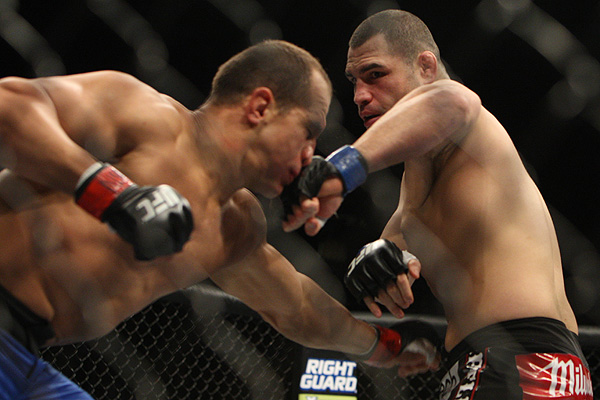 Heavyweight: People often ask me which fighter I think is the “most violent in MMA history” or if there was an All-Violence Team logo, a la the NBA, which fighter’s silhouette would stand in for Lakers great Jerry West. For whatever reason, it always feels right to say Wanderlei Silva. Yet, year-in and year-out, save for an aberrant 2011 campaign, there is not a more destructive force in the sport than Velasquez. His May rematch with Antonio Silva was every bit as nasty as expected, but Velasquez excelled in his October rubber match with Junior dos Santos, offering not just Sherdog.com’s 2013 “Beatdown of the Year” but a more grueling modern incarnation of Igor Vovchanchyn-Enson Inoue -- a whole new standard for decimating an opponent. Speaking of basketball, FightMetric credited him with the UFC’s first triple-double against dos Santos, as he became the first fighter in UFC history to post triple digits in significant strikes landed and double digits in takedowns executed in a single fight, with 111 significant strikes and 11 takedowns. He is a human wood chipper, the FightMetric wet dream and a very real nightmare for the modern MMA heavyweight.

Light Heavyweight: In the last two years, Jones has not been able to sniff at his standard-bearing 2011 campaign, perhaps the most violent in MMA history. Yet, “Bones” is our first four-time All-Violence rep. In April, he schoolyard bullied self-professed “American Gangster” Chael Sonnen with his left big toe sticking out of the skin courtesy of a compound fracture -- a violent flair just for kicks, pun partially intended. However, Jones’ fourth first-team appearance was sealed in his 2013 “Fight of the Year” win over Alexander Gustafsson. Their 244 combined significant strikes is a light heavyweight record by FightMetric count, and Jones’ 134 is the second most ever in a 205-pound contest. There have only even been seven individual 100-plus significant strike performances in the division’s history, and two of them were in the same fight. The key moment from the best round of the year in the best fight of the year was Jones landing a spinning back elbow for crying out loud. Thanks as always, Jon. Next.

Photo: D. Mandel/Sherdog.com
Belfort menaced middleweights.
Middleweight: Honestly, the testosterone debate in MMA might die down a bit if Belfort would just stop chopping elite middleweights’ heads off with his legs. Only four other fighters have two KOs via head kick in the Octagon, yet Belfort did it three times consecutively this year to three top-10 fighters. His spinning heel kick on Luke Rockhold in May was one of the year’s very best knockouts, period. He even became the first man to stop legendary hard ass Dan Henderson, this after 15 years and 40 fights of Henderson eating haymakers from a who’s who of MMA elite. It took all of 77 seconds. Belfort is one of MMA’s most over-the-top evangelical fighters, but in 2013, he fought like a man possessed by something much crueler and demonic.

Welterweight: Brown’s 2013 campaign was tragically truncated due to two herniated discs in his back, nixing a fight with Carlos Condit that could have been bonkers; and yes, we have come to find out he is not exactly the king of gender politics in the sport, either.

Still, we are talking about a cartoonishly violent Rust Belt brawler with borderline prison tattoos whose nickname stems from surviving a heroin overdose; the man is a gift and a curse. That gift, however, validates his second consecutive first-team appearance. He bashed the typically sturdy Mike Pyle in 29 seconds, but Brown’s piece de resistance was his graphic six minutes with Jordan Mein in April. Brown was actually dropped for the first time in the Octagon by a body shot, from a surgical striker like Mein no less, then shrugged it off and proceeded to elbow Mein to the body until he had to be rescued. Mein had not been knocked out since he was 17 years old. Brown is the sort of man you usually see in videos edited by Steve Alien.

Lightweight: Pettis was another man who was cruelly taken from us prematurely in 2013, with a slated December title defense against Josh Thomson dying on the vine due to a knee injury. Nonetheless, he styled on striking-savvy Donald Cerrone in January and became the first man to knock out “Cowboy,” utilizing a surgical roundhouse kick to the body. Then, he called his own shot in ridiculous fashion. He tore his PCL preparing for a 145-pound title challenge against Jose Aldo and then came in on seven weeks’ notice to lock a stone-cold textbook armbar on Benson Henderson to win the UFC lightweight title in his hometown of Milwaukee. Henderson, usually impervious to submissions and in his first fight as a Brazilian jiu-jitsu black belt, was forced to yell “Tap, tap, tap!” in the first round. Plain and simple, when Pettis is in the cage, animated .gifs happen.

Featherweight: Credit his January split decision loss to then-Bellator champ Pat Curran with putting Freire in the zone for the rest of the year. After dropping a technical striking battle with Curran, Freire went on the warpath to finish 4-1 on the year and take another Bellator 145-pound tournament title. He tortured tough wrestler Jared Downing like a wounded animal, needed only 79 seconds to become the first man to stop defensive specialist Diego Nunes, dominated Fabricio de Assis Costa da Silva every which way and then pulverized Justin Wilcox in a fight so brutal it felt like 20 minutes instead of two. His four wins came in the span of three-and-a-half months, which is quite brag-worthy.

Bantamweight: An All-Violence first-teamer in 2011, Faber enjoyed one of the year’s best bounce-back campaigns to reclaim top honors at 135 pounds. Despite his well-discussed failings in title fights, Faber treats non-championship opposition much more inhospitably than most fighters. He does not just beat guys he is supposed to be beat, he really beats them. He climbed on Ivan Menjivar like playground equipment to choke him out, becoming the only guy other than a 170-pound Jason Black in 2002 to tap him; he boxed up Scott Jorgensen’s face before casually strangling him; and he smashed young dynamo Michael McDonald -- another former All-Violence entrant -- in the head and guillotined him. Iuri Alcantara, who even managed to take the first round from “The California Kid” in August, should consider it a major feather in his cap that he did not get mauled like the rest of the opponents on Faber’s 2013 ledger.

Flyweight: After making a habit of stirring-but-not-thrilling 15- and 25-minute decisions, I do wonder if the UFC flyweight champion set the bar too high for himself. Johnson wore many different violent styles in 2013. In January, he overcame multiple knockdowns from all-galaxy super puncher John Dodson to wear out “The Magician” and take a well-appointed decision. In July, few expected fairly novice challenger John Moraga to put up a major fight, but Johnson blew him out before simply willing his way to a fifth-round armbar to close the show in style. Never one to rest on recent improvements and success, Johnson all but squashed his rivalry with Joseph Benavidez, a former All-Violence entrant himself, by wrecking the Team Alpha Male standout in just over two minutes with a devastating right hook and two coffin nails in December. The aerial shot of Benavidez’s figurative corpse was as grim a sight as any in the Octagon over the past 12 months.