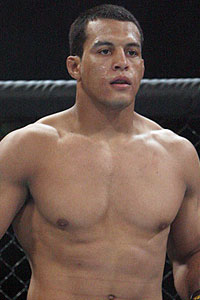 Photo by Sherdog.com
An armbar put Vinicius
Magalhaes in the finals.
Fresh off the Bader and Nover wins, I put down my laptop and gave the old back a stretch. I poured myself a coke and flipped over to the Victoria Secret show. I was feeling great until I was informed that Spike was airing a second episode of TUF. That explained the two discs I got in the mail. Back to the computer I went, as Krzysztof Soszynski was set to face teammate Vinicius Magalhaes.

Right to the action, and after an opening leg kick, Soszynski stalked Magalhaes and tried to feel him out. Magalhaes pressed him against the fence and used it to help pull guard. Then Magalhaes began to work his leg up to Soszynski’s head while dropping elbows from his back.

Soszynski, and the fresh knots on his dome, got out and stood back up. Once Vinny was on his feet too, Soszynski made him pay with some crisp punching and devastating leg kicks. Soszynski was starting to pick him apart and Vinny turned sloppy.

Instead of walking away, Soszynski stepped in close and Magalhaes grabbed his waist, pushed him against the fence and again pulled guard. This time Vinny went all black belt on him and transitioned to an armbar about as fast as you can. Despite a masterful game plan, Soszynski was caught in a flash from a very dangerous ground opponent.

Bader versus Magalhaes will make for a pretty decent finale. Don’t expect Magalhaes to be as passive as Eliot Marshall was against big Bader.

Phillipe Nover stamped his ticket earlier, and waiting to face him were the last two remaining lightweights. The fight between Junie Allen Browning and Efrain Escudero had turned into a grudge match, with Browning hating the mild-mannered Escudero mostly for his quiet confidence and dimples.

But of course we couldn’t just get to the fight. Oh no, it just wouldn’t be right without having one last certified honky tonk fiasco. Browning was found muttering in the gym about not wanting to fight anymore. He asked Frank Mir to replace him and Mir had had enough.

The former UFC heavyweight champion consulted with his other coaches and they decided to put Shane Primm in. If Browning didn’t want to fight, so be it.

“I’m not here to argue anyone into being a fighter,” Mir said. “He hasn’t shown me any indications that he’s mentally ready for it right now.”

But of course Junie wanted to fight, just not when it’s the proper time and place. An argument between Primm and Browning over who would win in a fight between Bader and Magalhaes ended with Browning hurling a glass and swinging away on Primm. “Like Nolan Ryan” is how Roli Delgado described the throw.

“You’re going home now for being a dumbass,” yelled Primm. “You want to swing at me while I’m sitting down?”

The Hakuna Matata circle of life for Browning came around full circle as we saw him filled with rage, reasoning, regret and then remorse. If he’d just knock off the high score and the low score, he’d be all right.

The next day the house was buzzing with “is he or isn’t he gone” scuttlebutt. Sure enough, Dana White showed up to have a talk with Browning. The UFC president approached it with the typical tact used by psychiatrists: “I can’t figure out if you’re f---ing retarded, bipolar or if you’re just one of these dudes afraid of failing.”

Browning admitted, guess what, that pretty much was his plan all along. White decided to consult with the other fighters, telling them this wasn’t “Survivor” and that they don’t vote each other off -- they beat each other off.

The guys burst out laughing and filed back into the house after being Jedi mind-tricked by White into thinking that he actually cared that Browning leave the right way. Regardless, the fight was on.

“I actually do want to hurt Junie,” Escudero said. “He’s been talking, getting under my skin since day one. Now I get the chance to punch him in the face.”

After touching gloves, Browning did a little stretching routine and soon they were both exchanging bruising leg kicks. Browning landed a solid body shot, but his ears ate plenty of elbows during a less-than-wise takedown attempt on the solid wrestler. Junie slowed down near the end of the round, and Escudero peppered him with leg kicks and a few good counters.

Browning looked as if he were dying at the end of round one, but his energy picked up in the second and he started locating his right hand on Escudero’s chin. Escudero finally took a shot and put Browning on his back, where he elbowed Browning’s body while Junie looked for advice.

Browning made a move to get out but left his head exposed, and Escudero slapped on a D’Arce choke. Junie tapped, sulked for a second and then stormed out of the room, slamming the door.

Nogueira relished Escudero’s ability to hang with Browning on the feet. Mir, in contrast, had some fitting final words for his student: “There was a part of me that enjoyed watching him get choked out.” Ouch.

Browning told his team and later the camera that he’s through with fighting: “If I can’t beat him, I can’t beat nobody in the UFC. Just a waste of my time.”

All of that, just for that.

Of course you know we haven’t seen the last of Junie Allen Browning -- it just wouldn’t be right.

Well that wraps up this, the eighth season of “The Ultimate Fighter.” The particular depravity shown during this go-round leads me to believe that I should give you some kind of Jerry Springer-like final moment.

Looking directly into the camera, I should be able to tell you that men engaging in activities that involve tinkle drinking, sushi soiling, bedwetting, tugjob for sushi soiling and late-night knockouts is uncommon and that for every knucklehead, there are a dozen Phillipe Novers who are both fighters and professionals. But I can't. It's a dark world out there, and it's only getting darker.