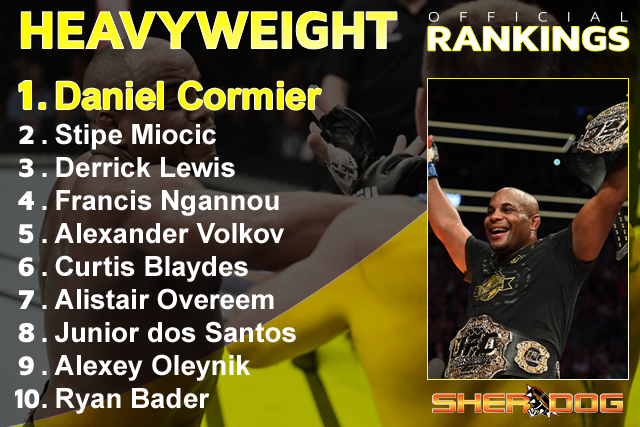 It’s been a memorable run for Lewis, who notched wins over Alexander Volkov, Francis Ngannou and Marcin Tybura in 2018 to become a social media sensation and an unlikely No. 1 contender. “The Black Beast” looked predictably overmatched in losing to Daniel Cormier at UFC 230, but it doesn’t change the fact that the Houston native has bucked the odds to win nine of his last 11 promotional appearances. Lewis will look to return to the win column when he faces former heavyweight king Junior dos Santos in the UFC Fight Night Wichita headliner on March 9.

Francis Ngannou lost much of his luster as the heavyweight division’s “Next Big Thing” during a disappointing first half of 2018 in which he dropped lackluster decisions against Stipe Miocic and Derrick Lewis. However, “The Predator” has since reversed course with back-to-back first-round stoppages of Curtis Blaydes and Cain Velasquez in his most recent two Octagon appearances. While the Cameroonian-born Frenchman may never be built for long, drawn-out fights, his knockout power makes him one of the most fearsome talents in the division.

Volkov was well on his way to his fifth consecutive Octagon triumph at UFC 229, as he was comfortably outlanding Derrick Lewis in the waning seconds of their featured bout. Then, “The Black Beast” crushed Volkov with a massive right hand and followed him to the mat, finishing the contest with powerful ground-and-pound at the 4:49 mark of the third frame. At 29 years old, Volkov still has plenty of time to contend for heavyweight gold in a shallow division. The Russian will return against Alistair Overeem at UFC Fight Night in St. Petersburg, Russia, on April 20.

Blaydes carried a six-fight unbeaten streak into his rematch against Francis Ngannou at UFC Fight Night 141, but it appears “The Predator” has his number. Ngannou earned his second victory over Blaydes in Beijing, stopping the American wrestler just 45 seconds into their headlining bout in Beijing. For Blaydes, the disappointing setback put a halt to any talks of title contention. Nonetheless, the 27-year-old has vowed to bounce back from the loss. He’ll get his chance against Justin Willis at UFC Nashville on March 23.

A move to Elevation Fight Team provided Overeem with a fresh outlook following consecutive brutal knockout losses, and “The Reem” responded with a first-round stoppage of Sergey Pavlovich in the UFC Fight Night 141 co-main event. The 38-year-old Dutchman showcased formidable ground-and-pound in handing the Pavlovich, a UFC newcomer, his first career defeat. Overeem is now 9-6 during his tenure with the Las Vegas-based promotion and will look to improve upon that mark in a matchup with Alexander Volkov at UFC Fight Night in St. Petersburg, Russia, on April 20.

Up-and-coming heavyweights cannot take dos Santos lightly. “Cigano” proved how dangerous he can be in the UFC Night 142 headliner, as he capitalized on Tai Tuivasa’s aggression to earn a second-round TKO in Adelaide, Australia. The Brazilian has won three of his last four Octagon appearances and and will attempt to continue his momentum against Derrick Lewis in the UFC Wichita main event on March 9.