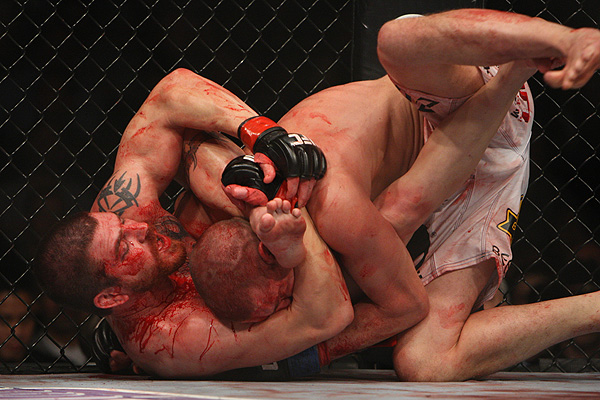 Jim Miller brought Joe Lauzon's insides to the outside at UFC 155. | Dave Mandel/Sherdog.com

Sometimes, a replacement opponent can be the perfect ingredient for upping the violence quotient of a fight, especially when that opponent turns out to be Lauzon. Originally slated to face the wrestling-oriented Gray Maynard at UFC 155, an injury to “The Bully” instead pitted Miller against Lauzon, one of the most notorious post-fight bonus hunters in the promotion. It turned out to be a match made in crimson heaven.

Miller made it his personal mission to test Lauzon’s resolve early in their lightweight scrap, as a barrage of wicked standing elbows opened a considerable laceration near the Massachusetts native’s right eye. Even as the blood began to pour down his face, Lauzon continued to press forward.

In between rounds, Lauzon’s corner urged him on, telling him he had already absorbed Miller’s best. “J-Lau” did his best to protect the cut, but his efforts were largely unsuccessful. However, Lauzon was able to reverse from the bottom in the second frame and share some of his blood with Miller. During a referee stoppage to cut some loose tape from Lauzon’s hand, the two combatants exchanged a brief fist bump while waiting for the action to be restarted.

That did not prevent Lauzon from pursuing a finish in the final stanza. “The Ultimate Fighter 5” veteran opened a small cut under Miller’s eye during an exchange and spent the final moments of the bout hunting for a submission. When the horn finally sounded, Miller breathed a deep sigh of relief as the crowd at the MGM Grand Garden Arena erupted in appreciation. Despite Lauzon’s best efforts, Miller emerged with a hard-earned decision.

“Joe is one of the toughest guys in the world, and that’s why he’s near the top of the division,” Miller later said. “I knew I was going to have to give him everything I had if I was going to put him away.”