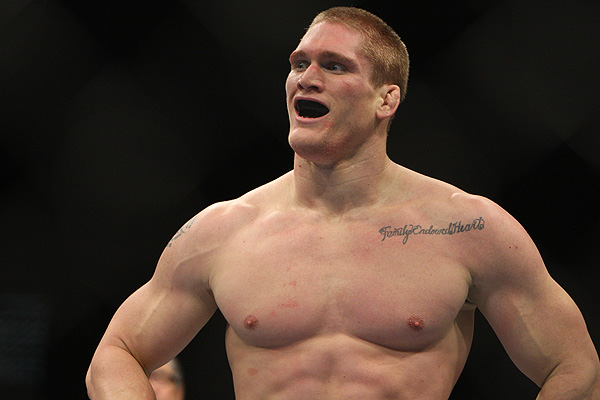 
Duffee exploded onto the scene in 2009 with a seven-second knockout of Tim Hague in his Ultimate Fighting Championship debut. He was a dynamite-fisted puncher with the physique of a bodybuilder and six straight he-dead knockouts on his record, so fans were understandably hyped about the arrival of an exciting 23-year-old in a thin division that has always lacked young talent.

The hype quickly grew out of control, and Duffee entered his second UFC bout against the unheralded Mike Russow as a more than 4-to-1 favorite. Russow was pudgy and somewhat comical in appearance, especially in comparison to the chiseled Duffee. For the first two rounds, Duffee absolutely pulverized the hapless Chicago cop, pummeling him with brutal combinations and fracturing his forearm with one particularly hard shot. Everything changed in the third round, when seemingly out of nowhere, Russow answered with devastating consequences.

Duffee followed the embarrassing knockout loss with a public dispute about fighter pay and was released from the UFC shortly thereafter. He reappeared seven months later to face the surging Alistair Overeem on short notice at the year-end K-1 “Dynamite” show in Japan, only to be viciously knocked out in less than 20 seconds.

The big-punching American did not resurface for more than a year, knocking out journeyman Neil Grove on a Super Fight League card in India. That win booked Duffee’s return ticket to the UFC, and he made an impressive re-debut with a first round knockout of Philip De Fries in December 2012. Disaster struck again, however, as a bout of rare Parsonage Turner Syndrome sidelined him for another year and a half.

Duffee is currently booked to fight Anthony Hamilton at UFC 181 on Dec. 6, and at only 28, he still has time to put together an excellent career. Even now, however, few fighters can match Duffee’s roundabout and downright strange in-and-out-and-in-again relationship with the UFC.

Number 9 » One of the most decorated submission grapplers in history, with enough Mundials and Abu Dhabi Combat Club Submission Wrestling World Championships gold medals in his collection to inspire the lustful attentions of a conquistador or mining company executive, he had all of the accolades and seemingly the talent to make a successful transfer to mixed martial arts.
« Previous Sherdog’s Top 10: Current Corners Next Sherdog’s Top 10: Rising Stars, 2014 First Edition »