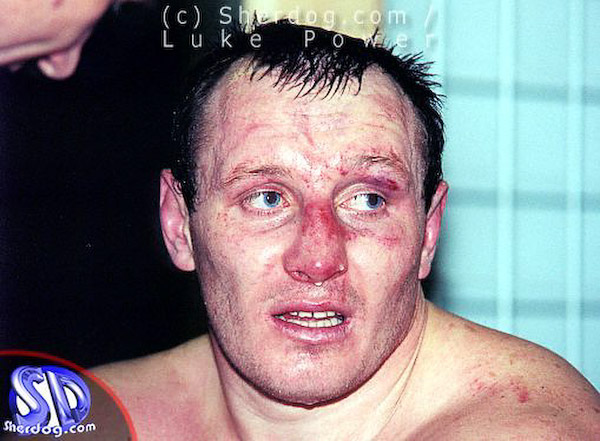 
The owner of 36-fight unbeaten streak and a finalist in the 2000 Pride Fighting Championships heavyweight grand prix, Vovchanchyn was at one time considered to be the world’s best heavyweight, this despite the fact that the Ukrainian stood 5-foot-9 and would eventually drop to fight at 205 pounds. Light heavyweight was even something of a stretch for “Ice Cold” -- in today’s climate, his ideal home would likely be at middleweight.

One of the most feared strikers of the 1990s, Vovchanchyn made up for his lack of grappling prowess with fast hands, brutal knees and whipping kicks. The kickboxer was a master of the eight-man tournament; his seven victories in various versions of the three-fights-in-one-night format are believed to be the most in MMA history.

During a career that spanned roughly a decade, size was no obstacle, as Vovchanchyn accumulated 55 victories -- 29 by knockout or technical knockout. He could also be creative, as video footage shows him forcing an opponent to cry uncle with head butts from his back, and it is often suggested that Fedor Emelianenko emulated his style of punching.

“That’s true, but only to some extent,” Vovchanchyn told Bloody Elbow. “More people were trying to imitate it, including Japanese [fighters]. They called it ‘Igor Vovchanchyn’ punching. I can remember myself entering a gym there and seeing everyone practicing my style of punching.”

It is not surprising that his style was imitated, considering that any “Ice Cold” highlight reel is violence at its uninhibited best. A roundhouse kick courtesy of Mirko “Cro Cop” Filipovic spelled the end of Vovchanchyn’s run at heavyweight in 2003, and he left the sport for good in 2005 at age 32.