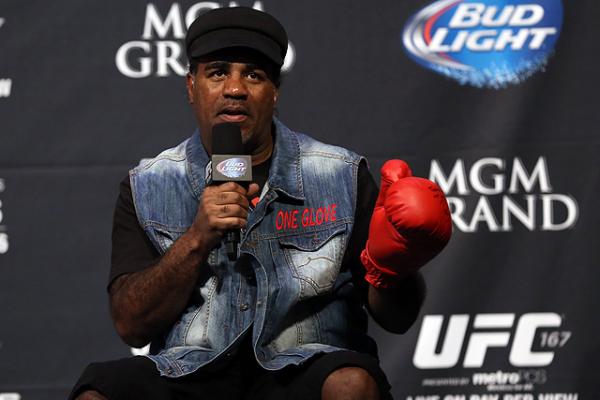 The first Ultimate Fighting Championship event was a combination Gracie Jiu-Jitsu infomercial, freak-show spectacle and legitimate attempt to find out which martial art was the best in a real fistfight. It drew competitors from many different styles, ranging from catch wrestling (Ken Shamrock) and kickboxing (Gerard Gordeau) to Sumo (Teila Tuli).

One of those competitors was journeyman boxer Jimmerson. Although he had numerous losses on his record earlier in his career, most of them to respectable fighters, Jimmerson was riding a solid 15-fight winning streak against less-demanding opposition when the UFC’s promoters came calling. While hardly an elite boxer, he was perfectly respectable and was ranked 10th by the IBF at the time.

Jimmerson drew a skinny Brazilian by the name of Royce Gracie in his MMA debut. In order to protect his lead hand, Jimmerson wore a single boxing glove, which is essentially the thing for which he is most well-known today. He failed to generate any offense before Gracie took him down, passed to the mount and achieved a victory by tapout purely through control.

Jimmerson boxed professionally for another nine years without achieving any sustained success and now makes a living teaching boxing and boxercise classes.

Number 9 » He never competed again, but the sight of his dislodged tooth and the sheer violence of the finish set the precedent for the brutal, unregulated early years of the sport.
« Previous Sherdog’s Top 10: Coolest Moves Next Sherdog’s Top 10: Overachievers »