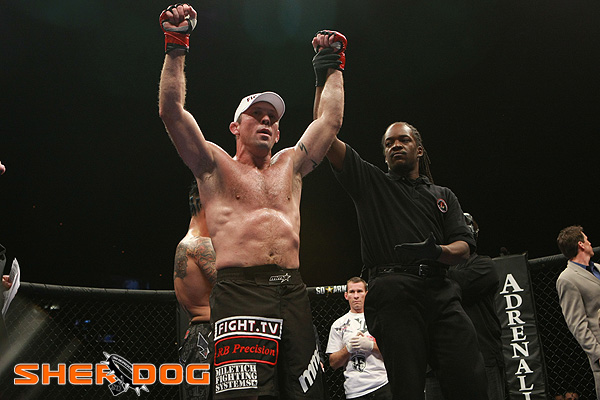 
Kuwait wanted to jump into the MMA realm in 2001, and a Kuwaiti promoter reached out to Monte Cox to see if he could entice a troupe of fighters to the Middle East. An unknown Syrian would be the main promoter. The dangling carrot was a six-figure sum to the winner, along with a gold championship belt.

They called the eight-man, 185-pound tournament Warriors War 1 and scheduled it for Thursday, Feb. 8, 2001, in Kuwait City. A decade after the Gulf War ravaged the country, parts of Kuwait City were still riddled with bullet holes and pocked by craters. Plus, Kuwait still carried the stigma of turmoil, so the tiny oil-rich nation was looking to coax anyone willing to entertain sheik Jaber Al-Ahmad Al-Jaber Al-Sabah, ruler of Kuwait.

It found Matt Hughes, Jose Landi-Jons, Dave Menne and Carlos Newton willing. Russians Karimula Barkalaev and Shamir Maromegob were already on the card, with two other guys, Lopes Moreno and Dersu Lerma. Miletich took the trip as Menne’s coach. They flew over in a smoke-filled Kuwaiti airliner --remember, this was pre-9/11 -- and touched down to encounter some shadowy sorts with shifting rules.

“Karimula Barkalaev was the scariest 185-pounder in the world by far. Barkalaev today would give people fits,” Miletich said. “I mean he was a scary son of a bitch. He was a crazy, crazy Chechen. There was another Russian (Maromegob) on the other side of the bracket. There were some bad boys there.

“We go to the pre-fight meeting and what was supposed to be the weigh-in,” he continued. “The Syrian promoter, who was dealing directly with the sheik of Kuwait and the sheik’s sons, announces that there isn’t going to be any weigh-in, because everyone is or around 185 pounds. Barkalaev looked a little too big for 185 to me. So did [Maromegob]. I told them that we’re doing actual weigh-ins. The Syrian said he didn’t have a scale.

“Dave Menne brought a digital scale with him to check his weight,” Miletich added. “Dave says he has a scale in his room, and I told him to get it. The Russians lock the doors so that Dave couldn’t leave. I got up, Matt got up, Carlos Newton and his camp get up, and we were ready to brawl with the Russians right there on the spot. I told the Syrian promoter that if there was no weigh-in and everyone’s not on weight, we’re going to get on a plane and go right back home. He could flush his tournament down the toilet. The Russians got out of the way. Dave brought the scale down.”

Barkalaev was overweight, as was his partner, Maromegob. The two alternate Russian fighters were so overweight that their fights were scratched altogether. While Barkalaev and Maromegob were slipping into their plastic suits to drop some pounds, Miletich and his guys sat and ate after making weight. Bad blood was brewing.

For Warriors War 1, Miletich and his gang arrived at what in the U.S. would be equal to an upscale high school gym. This venue, however, had plush leather seats on one side for the sheiks and royal family. On another side sat a bunch of Navy SEALs that were stationed in Kuwait. 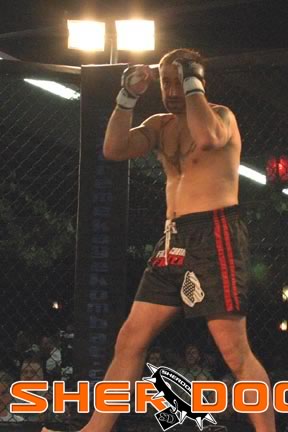 (+ Enlarge) | Photo: Photo: Tom Osborne/Sherdog.com
Menne was the last man standing in Kuwait.
“The fights start and Menne beats Newton; Landi beats Matt Hughes; Menne beats one of the Russians; and Barkalaev wrecks Landi in the second round, just destroys him, beats him half to death,” Miletich said. “They get to the championship match, and it’s Dave and Barkalaev. Dave looks at me and says, ‘Holy s---, how am I going to beat this guy, he’s a beast?’ I told him Barkalaev totally commits on his punches. He throws no fakes and when he throws, you know he’s throwing for real. We told Dave to move his head and make sure he counters him, make sure you catch him coming in. Dave won the decision. John McCarthy is the referee and raised Dave’s hand. I was with Monte, Matt Hughes and the sheik of Kuwait in the ring presenting Dave with a check and a gold belt. I’m standing there looking at them with my back to the open cage gate. Matt looks behind me and says, ‘Here they come’ -- all the Chechens and Russians.

“I spin around and the Russians are coming after us in the cage with the sheik,” he added. “We’re all squaring off ready to go. The next thing you know, all the Navy SEALs come up behind them and surround them. Suddenly, these Russians realize they’re outnumbered and back down. They leave the cage. We told the Syrian promoter that we had to get another hotel, because those Russians were going to kill us. They were some rough characters. The Syrian guy tells us, ‘You’ll be fine.’”

Miletich did not believe him. He appealed to the Kuwaiti sheik that there was no way they could return to the same hotel where the Russians were staying. If they did, a fight with Barkalaev’s backers would ensue and it could potentially be a massive problem that Kuwait did not need. The sheik agreed. He assigned one of his drivers to take the Americans back to their hotel to pick up their bags. When they arrived, Miletich and the group opted to stay for a few minutes to get something to eat at the hotel buffet.

“We noticed the Russians in there, and they weren’t sitting together,” Miletich said. “They were all spread throughout the room. I’d look up and see another Russian move to a table closer to us. They slowly tried to surround us. I told the guys we were going to grab our bags, jump in the cars out front and get out of here. I thought they were going to stab us, to be honest. We grabbed our bags and the sheik’s driver took us to this beautiful five-star hotel, though [it was] a little beat up from when Iraq attacked.”

They arrived looking like bruised stragglers, and there was no way they were getting inside. One of the drivers explained to the hotel manager that the Americans were guests of the sheik -- the sheik. That carried no significance. In the manager’s mind, it could have been one of many Kuwaiti sheiks. He kept waving off Miletich and his group, telling them to leave. Finally, the driver got on the phone and dialed Al-Jaber Al-Sabah himself. He passed the phone to the manager, who recognized the voice, nervously nodded and then began quickly clapping his hands for his serving team to accommodate Miletich and his guys, who badly wanted out of Kuwait.

“
In MMA, to a lot of people,
it’s become the new skydiving.
They just want to do it once
before they die. I have a problem
with that mentality of getting into a sport
where you can get that badly hurt and
not commit to it 110 percent. A lot of
people do it so they can go in bars to pick
up chicks saying they’re MMA fighters.

There was just one problem: Menne had not been paid in full, which came out to $125,000. As they got situated over the next few days, Miletich and his guys hung around with the Navy SEALs, threw down shots of Jack Daniels and puffed on Cuban cigars. The idle time gave Cox a chance to crunch some numbers. Something was not right.

“Monte asks one of the sheik’s sons what they paid for the show,” Miletich said. “They told him around $1.5 million. Monte does the math and adds up all of the expenses, including everyone’s pay. It comes out to around $300,000 for everything. Monte told them they got taken for about $1.2 million ... That was par for the sport back then.”

Joseph Santoliquito is the president of the Boxing Writer's Association of America and a frequent contributor to Sherdog.com's mixed martial arts and boxing coverage. His archive can be found here.