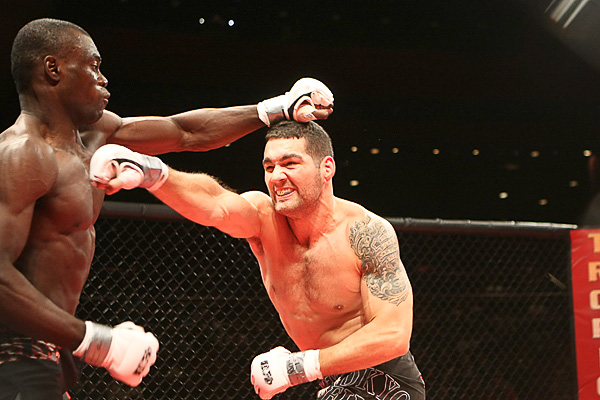 I want to say first of all that I really like Chris Weidman. He is a very exciting young prospect, and I do really think he will be UFC champion someday. However, isn’t this guy getting full of himself pretty quick? He beats Mark Munoz, so he wants to challenge Anderson Silva and Jon Jones and thinks that Alan Belcher is below him. Matt Serra or Ray Longo should grab this kid and tell him that he’s a prospect, and this is how the fight game works. -- Aron from Florida

Brian Knapp, features editor: At this point, we can toss a number of labels in Weidman’s direction. Prospect is no longer one of them. The guy is an absolute stud and a viable title contender at 185 pounds right now. Whatever doubters were left prior to his bout with Munoz at UFC on Fuel TV 4 should be long gone. Any who remain need to have their heads examined.

I admire Belcher and his ability as much as anyone else, but you have to admit he stands to gain far more from a bout with Weidman than Weidman does against him. Inconsistent and injury-prone, he finds himself much further down in the 185-pound pecking order and has yet to fully erase the memories of being choked unconscious by Kendall Grove and blown apart by Jason Day. Plus, Belcher has not fought more than once in a calendar year since 2009.

If Weidman views Belcher as being below him, perhaps he has a point. None of it matters at the moment. While Belcher nurses another injury, Weidman will tackle Tim Boetsch at UFC 155 in December. I think Weidman wins that one rather handily, at which point he will once again be knocking at Silva’s door.

Confidence is certainly part of the Weidman package, and it should not be considered a detriment. It is a common trait among athletes who function and excel at a high level. Why not challenge Silva? Who else is left for “The Spider” at 185 pounds? Maybe it is too soon, but critics were uttering those same doubts when Jones was awarded his title shot against Mauricio Rua after just seven UFC appearances.

Personally, I think Weidman’s offering to fight Jones on short notice was a calculated stroke of genius. Weidman is a bright guy, and he probably knew there was little to no chance the UFC would accept his advances. It was a low-risk, high-reward proposition. Weidman showed he was willing to step up to the plate for the company in its time of need and undoubtedly scored a few brownie points with Zuffa brass. To me, that proves he knows exactly how the fight game works.