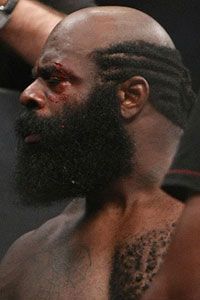 What do tight credit markets plus $60 million in debt plus the defenestration of the organization’s marquee star’s image amount to? If you’re ProElite, the beginning of the end. While EliteXC could conceivably be purchased and retooled under new ownership, the larger ProElite parent is likely to suffer a less promising fate. Before Saturday’s disaster, they were still facing the stalled minor leagues in Hawaii and abroad not to mention an incoherent, horribly jumbled experiment in failed multi-branding. In assessing the company, one soon gets the sense the deck is simply too stacked against ProElite to recover at this point. To repair what ails them would require an untangling of a Gordian knot so complicated and interwoven Hercules himself would balk.

There isn’t much to say here except that it is not merely that Slice lost that makes his defeat so epically disastrous; it’s that Slice’s loss so neatly fits the narrative about what would happen to Slice should he be matched up with anything beyond a heavy bag. Namely, as soon as Slice fought any professional MMA fighter of any reasonable merit, he’d be crushed and crushed quickly. With poetic certitude, the latest of the late replacements, a UFC pink-slip carrier and part-time fighter in Seth Petruzelli emerged to fulfill the prophecy so many had promised would come. There are criticisms EliteXC tried to script the outcome of Petruzelli vs. Slice, but even they couldn’t have imagined a scenario that turned out to be so effortlessly literary. 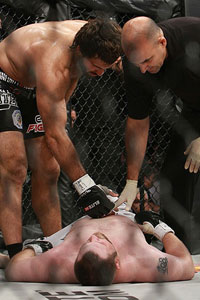 Hardcore fans generally direct their officiating scorn toward inept judges whose comprehension of the various intricacies of MMA is often revealed to be far less than what’s required to do a satisfactory job. By officiating the Andrei Arlovski vs. Roy Nelson bout, referee Jorge Ortiz proved ineptitude extends beyond the judges vantage point and directly into the cage itself. While Nelson was in side control working for a kimura on Arlovski’s left arm, Ortiz strangely decided he hadn’t witnessed enough action and stood both fighters up. While stand-ups from side control are not without precedent, they are usually without merit. Most importantly, they are certainly unwarranted when the fighter on top is actively working for a submission as Nelson was. Ortiz’s attitude is little more than an impatient, anti-grappling admixture, which would be forgivable were Ortiz merely a fan in attendance. For Ortiz to be a part of the equation that guides the course of the fight is downright indefensible.

The alleged vice president of EliteXC is in desperate need of a press secretary or communications manager who can adeptly address issues related to the organization without appearing like a mascot or defensive juvenile. Not only did Shaw’s verbal sparring with UFC President Dana White leave anyone witness to the exchange feeling pity for Shaw, but they color him feckless as well. But no imagery could’ve imprinted his unprofessionalism or bias worse than the one circulating MMA message boards and blogs everywhere: Shaw screaming to referee Troy Waugh that Kimbo had been struck in the back of the head. Despite the absolute vacuity of the charge, the more important concern is the open bias of an EliteXC official on such vivid display. Beyond unseemly but somehow not unexpected, the sight is one of utter amateurish behavior.

Were T. S. Eliot alive, he’d have likely discovered great inspirational overlap between what prompted him to pen “The Love Song of J. Alfred Prufrock” and Shamrock’s behavior just prior to his would-be fight with Slice. There is little that can be said in defense of Shamrock. Accidents do happen and perhaps Shamrock’s misfortune is nothing more than poor luck, but something about the entire incident smacks more of karma -- for EliteXC and Shamrock. His comeuppance has nothing to do with malfeasance or professional wrestling antics, but plenty to do with the writing on the wall. While Shamrock’s accomplishments in MMA are almost without parallel, his ability to compete in the sport is no longer. He must not scratch what he perceives is his itch for redemption. Characteristically stubborn, though, Shamrock is capable of anything. Shall Shamrock put his weathered body through another grueling training camp? Does he dare to eat a peach?

Luke Thomas is the Editor-in-Chief of the MMA blog BloodyElbow.com.