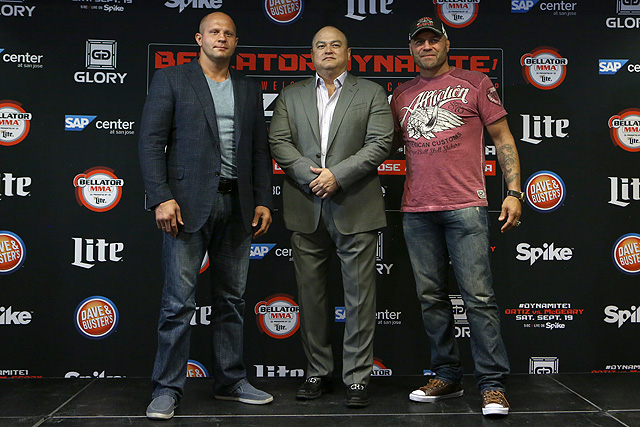 3) What would be your dream MMA matchup, between two fighters of any era?

Kyle Barrowman: I wish that Fedor Emelianenko had been healthy for the 2006 Pride Open-Weight Grand Prix and that Mirko Filipovic had been able to get another shot at him during that incredible run of his. Ever since that September night in 2006, I have maintained that the “Cro Cop” who stormed through Wanderlei Silva and Josh Barnett that night could have and would have beaten any human being who has ever walked the face of the Earth. It was bad enough that “Cro Cop” did not get the chance to avenge his loss to Antonio Rodrigo Nogueira, who (rightfully) lost to Barnett and whom “Cro Cop” would have absolutely obliterated that night, but to think of how tantalizingly close we were to that rematch, and to think as I do that “Cro Cop” would have been able to beat Fedor that night, is undoubtedly what I would use a magic MMA wand to make happen.

John Brannigan: There’s a few that come to mind but I’m going to go with Fedor Emelianenko vs. Brock Lesnar. Seeing Fedor in the UFC would have been amazing.

Jason Burgos: This one is simple, because the answer includes two of my all-time favorite fighters, who are also similar in size and compete in the same weight class. So, there won’t be any need to get into fantastical bookings such as Robbie Lawler versus Mirko Filipovic. My dream matchup would be the Pride version of Fedor Emelianenko versus Daniel Cormier. Where wouldn’t that fight be entertaining? On the feet, it’s Cormier’s technical pressure and solid pop against The Last Emperor’s hand speed, power and unpredictable angles. On the mat it’s DC’s Olympic-level wrestling versus Emelianenko’s mastery of sambo and sneaky submission excellence. It would be an MMA delight.

Edward Carbajal: Prime Fedor Emelianenko versus prime Daniel Cormier under Pride FC rules. I really wish the UFC didn't bury the Pride brand but having it brought back in Quintet Ultra recently made me think about this matchup in a future Ultra event since it's the only time I've seen them use the Pride name in something fans seemed to like. However, as far as the MMA fight would go I think it would be something that would go almost into the final round, not the distance with one of them finishing the other.

Tristen Critchfield: I’m of the opinion that cross-era matchups would generally tend to favor the modern fighter due to progression in training, skills, technology and the like, so I’m going to stick with a bout that was often teased but never came to fruition: Georges St. Pierre vs. Anderson Silva. These two are at — or near — the top of many all-time pound-for-pound lists and both happened to be in their respective primes around the same era. For good measure, we might as well have it at Cowboys Stadium — the UFC’s pipe-dream venue of the past decade-plus. Just so we’re clear, I don’t want to see it now with the current version of each man.

Ben Duffy: Urijah Faber vs. Norifumi "Kid" Yamamoto. There’s about a three-year stretch during which it would have been amazing at any point, but give me late 2007: “The California Kid” is 18-1 and the World Extreme Cagefighting featherweight champ, while Yamamoto is 16-1 with one no-contest and won the K-1 Hero’s 154-pound Grand Prix by crushing people a good 20 pounds over his ideal weight. Little blue cage or big white ring, doesn’t matter to me; just make it happen. Man, now I’m mad and bummed all over again.

Brian Knapp: I will always lament the fact that we never got to see prime Georges St. Pierre against prime Anderson Silva. That seems like as good a choice as any.

Tudor Leonte: My dream MMA matchup would be the epic clash between Fedor Emelianenko and Cain Velasquez. Technically, the two behemoths still can face each other in the future, but the probability that this actually happens is infinitesimal.

Jay Pettry: Last year we delved into a question about GSP vs. Silva so let’s go a different direction. Affliction dangled this fight above our heads before the promotion disintegrated, but it would have been incredible to see a heavyweight showdown between Fedor Emelianenko and Randy Couture. Their eras nearly matched, but many are unaware that the two took part in the same Rings tournament in 2000. They could have met were it not for Emelianenko taking an illegal elbow from Tsuyoshi Kosaka and getting ejected from the tournament.

Keith Shillan: Before being a media member, I was a fan. My all-time favorite fighter is Randy Couture. I would have loved to have witnessed him and Fedor Emelianenko battle inside the Octagon.

Mike Sloan: It's a matchup that never happened and it should have: a prime Randy Couture taking on a prime Fedor Emelianenko.

Tyler Treese: Always wanted to see “GSP” against Anderson Silva, even if the Canadian just wrestled his way to a decision.

Anthony Walker: I know this pick is a bit out-of-the-box but bear with me... I wish we saw prime versions of Anderson Silva and Cung Le face each other. Often times when we talk about fantasy matchups in sports, there’s a huge disconnect from the realities of time and era. For instance, the debates about the greatness of Michael Jordan versus Julius Erving or who would win between Muhammed Ali and Mike Tyson. Silva and Le were at the peak of their powers around the same time and held middleweight gold and highlight reels to prove it.

Beyond the simple champion vs. champion of a separate promotion that applies across many contemporaries, the style match up adds another level of fun in my eyes. Silva and Le were both accomplished traditional martial artists who were more than comfortable displaying those abilities in the cage. I imagine their pairing would be an even more entertaining and faster-paced version of Silva’s main event against heir apparent Israel Adesanya last year.

Additionally, Le was highly underrated as a grappler. In addition to being a junior college wrestling champion, Le was also an undefeated Sanshou kickboxer. That ruleset incorporated takedowns and sweeps with the flashy kicks and knockout punches he was known for. It would’ve been interesting to see if Le could dictate where the fight went, and if the Nogueira black belt would be too much to handle on the floor.

Once Le joined the UFC roster I was hoping that this dream would come true. The combination of Wanderlei Silva, Michael Bisping, Chris Weidman, a broken tibia and horribly handled PED testing ruined it for us. We just have to settle for matching them up in the first EA Sports UFC game.