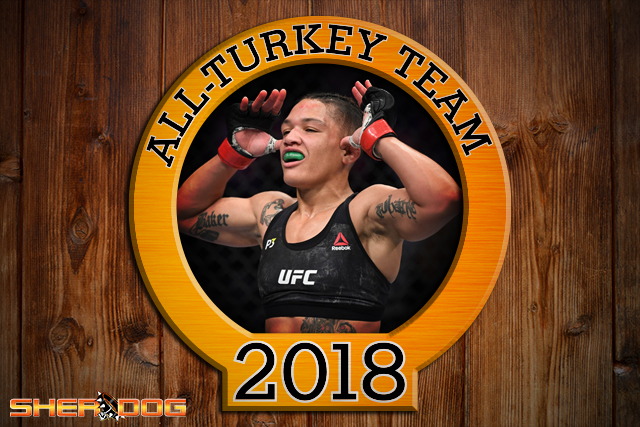 
The Ultimate Fighting Championship created the women’s flyweight division by building Season 26 of “The Ultimate Fighter” to populate it. Eubanks stormed through the competition with two finishes and a decision to earn a spot in the final. When she was set to weigh in for what would have been a title fight at the end of 2017, it turned into a hospital stay for Eubanks, whose kidneys failed while trying to cut weight. Sidelined for months, Eubanks came back to win a clear-cut decision over Lauren Murphy in her UFC debut in June.

When the promotion scrambled to put a championship bout on UFC 230 in Madison Square Garden, it pulled Valentina Shevchenko from her scheduled matchup against Joanna Jedrzejczyk to fight for the vacant flyweight belt against Eubanks. Reaction was swift and largely negative, with many lamenting the UFC was thrusting a title fight on the card for the sake of having a title fight, all while claiming Eubanks’ 3-2 record was hardly becoming of a UFC title challenger.

During an episode of the popular podcast “The Joe Rogan Experience,” longtime UFC commentator Joe Rogan learned of the news of the bout and matter-of-factly stated, “No offense, but I don’t even know who Sijara Eubanks is and I’m the commentator for the UFC.” Realistically, it is unlikely Rogan watched much if any of “The Ultimate Fighter” season on which she participated, with her one Octagon appearance coming on a UFC Fight Night card that Rogan did not call. Listening to the backlash, the UFC pulled the matchup one week after announcing it.

Opting instead to have Daniel Cormier defend his heavyweight strap against Derrick Lewis, the UFC pushed Eubanks down from the headliner to the Fox Sports 1 prelims, where she faced former “Ultimate Fighter” opponent Roxanne Modafferi. Coming into that bout, Eubanks missed weight by over a pound, and shrugged it off on social media. If it had been a title fight, she would have missed championship weight by 2.2 pounds, and any title aspirations would have gone up in smoke.

Eubanks defeated Modafferi by decision and then posted a bizarre callout on social media. Inexplicably, she did not challenge the winner of the upcoming flyweight title fight between Shevchenko and Jedrzejczyk or a higher ranked flyweight like former champion Nicco Montano or previous foe Katlyn Chookagian. Instead, she chose to call out strawweight Mackenzie Dern, whom she faced multiple times in jiu-jitsu competitions years ago and a woman with a weight-cut history of her own.

Dern competed and won twice this year, but she came in a staggering seven pounds heavy against Amanda Bobby Cooper in May, all but checking in to the flyweight division, given her history of weight problems. She has missed weight by at least 2.5 pounds in three of her seven career fights.