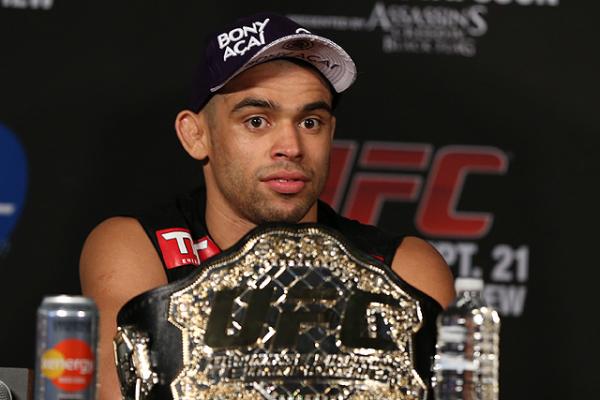 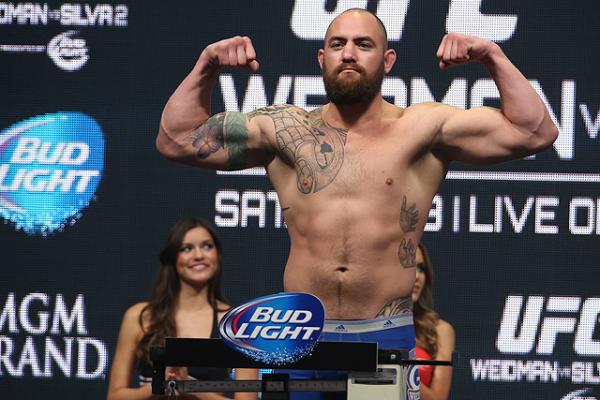 Photo: D. Mandel
Browne finished all three foes.
Heavyweight: Browne polished off three very good heavyweights in a combined six-and-a-half minutes in 2013. Against two outstanding heavyweight grapplers in Gabriel Gonzaga and Josh Barnett, Browne simply stuffed his victims’ takedowns while beating them unconscious with short elbows to the side of the head, in 71 and 60 seconds, respectively. If you are in there with Browne, how shaken are you when contemplating a takedown? The only time he ever faced any adversity was against former K-1 World Grand Prix winner Alistair Overeem. Browne picked himself up off the mat after getting dropped by knees to the body from a man they once called “The Demolition Man” for a reason.

He then proceeded to front kick him in the face like a 6-foot-7, 245-pound Anderson Silva.

Light Heavyweight: We need not go over Gustafsson’s candidacy too thoroughly. Despite fighting just once, Gustafsson helped author one of the best and most dramatic fights in MMA history by combining with Jon Jones for 244 significant strikes, each man accounting for one of the seven 100-plus significant strike performances in the division’s history. His efforts instantly invalidated the “Not Quite Human” shirts Nike dreamed up for Jones, and he grew a tough-looking Viking beard, to boot.

Middleweight: Weidman knocked out Anderson Silva, arguably the greatest fighter in MMA history, with a heavy barrage of punches to win the UFC middleweight title and then broke the Brazilian’s leg in half in the rematch by knee-checking one of Silva’s kicks. Read that sentence to yourself again and think about the simultaneous craziness and violence of it all. Weidman even waited until his initial clash with Silva to re-sign with the UFC, confident he would emerge victorious against the legendary “Spider” in the final fight on his deal. Considering the balls on this man, his tailor must have a heck of a time.

Welterweight: Thatch is one of MMA’s most promising violence prospects. He earned himself a UFC deal by thumping and tapping Roufusport up-and-comer Mike Rhodes in two-and-a-half minutes and then stepped up his intensity for the big show. In his Octagon debut in August, he savaged Justin Edwards with a whirlwind of punches and knees. However, if you need to get a feel for what sets Thatch apart, watch him dismantle rugged vet Paulo Thiago. I know Thiago is no longer a member of BOPE in Rio de Janeiro, getting rocket launchers shot at him by drug dealers like a scene in “Elite Squad,” but this is a hardened professional fighter. Thatch rolls up on him, punches him in the face and then lands a stepping knee to the liver that folds Thiago like cheap lawn furniture and actually has him tapping out. A guy who looks like the bass player in a bad nu metal band eviscerated a Brazilian military policeman. Do you remember when you were a kid, flicking through cable late at night and you found some fodder that you could not quite understand but somehow knew you probably should not be watching it? Thatch is a lot like that.

Lightweight: The only knock on Chandler’s 2013 campaign was that he lost the Bellator lightweight title via contentious split decision in a bloody, classic 25-minute war that most people felt he won. He started his year by rag-dolling physically imposing Olympic judoka Rick Hawn and then sent underrated and hard-chinned “Caveman” David Rickels back to the Stone Age with a 44-second blitzkrieg. Regardless of how you scored Chandler-Eddie Alvarez 2, most would agree that while it takes two fighters to create a classic bout, Chandler was the better personification of violence in that fight. He chugged forward, face bloodied and mangled, throwing endless haymakers and double-leg shots at Alvarez. So disfigured was Chandler after the rematch that I am told no one even recognized him at Dave and Buster’s.

Featherweight: I do not blame Mendes for how he fought against Nik Lentz at UFC on Fox 9. If it is to be believed that Mendes spent a month battling a sinus infection -- his lackluster fight performance would seem to suggest something of that kind at work -- he fought in a smart, heady way to prevail over a tough nut to crack. However, let us not let one bad apple spoil this bunch. Prior to his otolaryngological disaster, Mendes ripped through two rough-and-tumble Midwest “wrasslers” in Darren Elkins and Clay Guida. For Guida, it was his first knockout loss after 10 years and 40-plus fights. An All-Violence third-teamer in 2012, Mendes has blossomed, not into just a serviceable striker but a monster puncher under the tutelage of Duane Ludwig. Let us hope his nose -- and surrounding areas -- stay clean in 2014, for the sake of violence.

Bantamweight: Though Dominick Cruz’s recent groin tear made it officially official, Barao did not really need the former champ and the UFC to reveal the identity of the world’s top bantamweight, as he showed it off this past year. In 2013, Barao displayed a greater predatory knack, finishing off strong fighters with his unique palette. He overcame a hard knockdown from big-hitting youngster Michael McDonald, wore down the Californian and dispatched him with the Nova Uniao house special: the arm-triangle choke. Against Eddie Wineland, a bona fide sprawl-and-brawler with explosive punching power, he drew up a sublime fusion of a spinning back kick and professional wrestling legend Shawn Michaels’ Sweet Chin Music to knock out one of the best strikers in the division. That alone was probably enough for people to stop using the word “interim” when discussing this man.

Flyweight: Let us first get the demerits out of the way. Lineker missed the 125-pound mark twice in his three 2013 appearances -- and pretty badly, at that. Unprofessional though it may be, chalk it up to youthful exuberance for the Brazilian bomber who turned 24 years old on New Year’s Day and hope he does not blossom into another Paul Daley. If not for those weighty indiscretions, Lineker likely would have taken first-team status after his initial All-Violence berth in 2012. “Hands of Stone” earned six knockdowns in 2013, tops in the UFC, and became just the second fighter in UFC history to earn three knockdowns in a single fight twice, following in the footsteps of Anderson Silva. Lineker lands 6.56 significant strikes per minute, the highest rate in UFC history. His thudding power almost does not seem real at times, bruising and crushing victims with punches that sound like someone has added Foley effects on top of them. Frankly, audible violence is awesome violence.